Cummins has introduced four new engine models capable of meeting Stage V and Tier 4 Final emissions regulations without the use of an EGR. 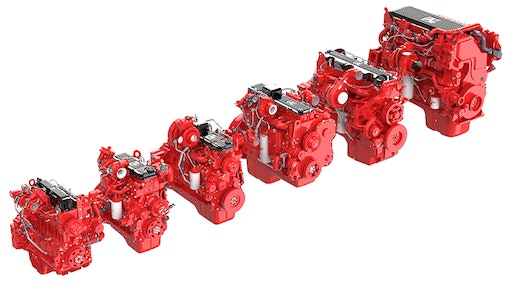 At bauma 2016, Cummins Inc. has revealed a new generation of ultra-low-emissions engines spanning from 100-430 hp (75-321 kW) designed to meet 2019 European Union (EU) Stage V emissions regulations with simpler, EGR-free architecture and Single Module aftertreatment technology. The newly named F3.8, B4.5, B6.7 and L9 engines leap ahead of their Stage IV/Tier 4 Final equivalent engines with over 10% more power and almost 20% more torque averaged across the range.

"Removing Exhaust Gas Recirculation (EGR) allowed us to realize the full potential of the engine for Stage V without increasing displacement size. Our 12-L engine already pointed the way forward for a successful EGR-free design at Stage IV, so we were able to cascade this simpler approach down through the power range. No EGR also means there is less to cool, which will help lower the cost of OEM integration," said Jim Fier, Cummins Vice President - Engineering, speaking at the bauma engine reveal.

Improvements to fuel efficiency will result in the overall fluid cost of the new Stage V engines, reducing by 3% on average depending on application, compared to those of Stage IV. The engine operating costs will be further reduced with an achievable 1,000-hour oil change interval, twice as long as the current 500 hours.

Smarter electronics will bring Start-Stop technology imbedded in the engine management system, offering the potential to realize fuel savings of between 5 and 15%, corresponding to the amount of equipment idle time. Cummins Stage V engines are enabled for wireless connectivity, ready to deliver instant, expert engine diagnostics over the air so operators can maximize the uptime availability of their equipment.

"Each one of these new engines is intended to set a new benchmark in its class by providing unprecedented levels of performance and will come with the ability to transform the productivity of equipment for Stage V applications," said Fier.

Enhanced performance combined with simplicity is further reflected in the use of a single Cummins turbocharger on the Stage V engines range. The latest high-efficiency wastegate turbocharging is used for the F3.8, B4.5 and L9 engine. The B6.7 retains proven variable-geometry technology, with the Holset VGT achieving exceptional power density with fuel-efficient performance.

For both 4- and 6-cylinder engines, the substantial increase in performance is applied across the full engine speed rpm range. This makes the Stage V engines more adaptive than ever for different machine-load demands, available either with high power at high engine rpm or high torque at low engine speed rpm. Combined with smart electronic feature sets and calibration shaping, this means that every application receives the ideal performance curve for the specific operation of the machine.

The Stage V regulations to be introduced by EU countries will bring extremely stringent emissions regulations for construction, mining and material-handling equipment, commencing January 1, 2019. The key requirement for Stage V is a Particulate Number (PN) count of 1,012/kW-hr - the maximum amount emitted for each kW of engine output per hour. The amount of Particulate Matter (PM) emitted by weight will reduce to just 0.015 g/kW-hr.

Taken together, the PN count and PM weight requirement in effect eliminate 99.9% of all PM, which requires the use of a Diesel Particulate Filter (DPF). Additionally, oxides of nitrogen (NOx) emissions will be set at the extremely low level of 0.4 g/kW-hr, requiring the use of Selective Catalytic Reduction (SCR) aftertreatment. Engines above 751 hp (560 kW) are included in the Stage V regulations, but do not require the PN count.

The Cummins Single Module for Stage V combines DPF, SCR and urea-dosing technologies in one module, providing an up to 50% reduction in envelope size and a 30% reduction in weight compared with those of Stage IV exhaust aftertreatment.

The Single Module is essentially a fit-and-forget system, capable of removing emissions almost entirely by passive regeneration, with no impact on equipment operation and requiring no operator intervention. The service cleaning interval is expected to extend significantly beyond the 5,000 hours of today's systems. The modular design of the Single Module allows for varying diameters and lengths, to efficiently match catalyst capacity to the power output of the engine.

Cummins Stage V engines come with an inherently high degree of tolerance to sulfur in fuel - up to 5,000 parts per million - removing a major barrier in reaching the goal of a universal engine platform. That offers OEMs the prospect of using the same Cummins Stage V engine in their equipment worldwide, overcoming the complexity of multiple emissions regulations in effect. For each machine, that will bring a common engine installation, with the same electronic integration and mechanical hookups, with or without exhaust aftertreatment, depending on the emissions levels.

While meeting the more stringent Stage V regulations in 2019, the new engines will also be co-certified to meet U.S. Environmental Protection Agency (EPA) Tier 4 Final and equivalent emissions regulations in Japan and South Korea. That will make available the benefits of the EGR-free engines to help OEMs reduce the complexity involved with powering their global equipment platforms.

Cummins' heavy-duty duo, renamed the X12 and X15 for Stage V applications, will retain the same DPF-SCR aftertreatment system in order to provide ongoing installation continuity for OEMs in higher-output, more specialized machines. With an impressive 512 hp (382 kW) top rating for the 12-L and 675 hp (503 kW) for the 15-L, the two engines will continue to bring proven, premium performance ideally suited for the toughest duty cycles. The EGR-free X12 lowers heat rejection by over 40% compared with that of engines using cooled EGR.

At the other end of the Stage V range, the 4-cylinder F3.8 will be available at a 74 hp (55 kW) rating, allowing the opportunity for machines to downsize their engine installation without any loss of torque performance. The F3.8 will offer the benefit of a highly compact, engine-mounted Cummins DPF without the need for SCR, making that rating particularly suitable for rental equipment.