Equipment fleet managers ask for multifunctional equipment to avoid costly downtime waiting for the right purpose-built machine for a specific job which prompts the development of interchangeable attachment systems. 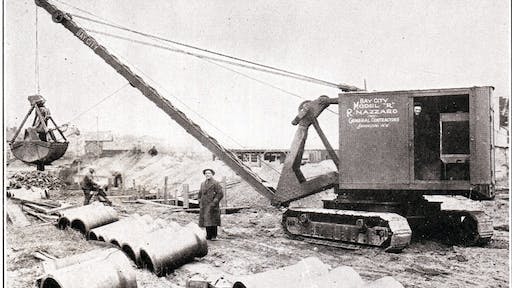 Starting in the early 1920s, Bay City Dredge Works offered a unique mast to which a backhoe or skimmer boom could be mounted if frequent attachment changes were being made. It was better to mount the attachment directly to the machine; but the mast, which was discontinued in the 1930s, made the process easier.

The Otis steam shovel of 1836 was the first cable excavator. Shovels modified for trench excavation were first developed in 1896, draglines followed in 1904 and the first true cable backhoe in 1912. The Industrial Works locomotive crane of 1883 may well have been the first mobile cable crane built in America.

However, each of these machines was purpose-built, and contractors could end up needing a backhoe but only have a dragline available. A dragline would be able to do a backhoe’s work, but with inferior efficiency and results. If a shovel were needed, neither machine could serve that purpose. Even a boom would be set up only for lifting, clamshell work or dragline service.

Under such circumstances, a machine’s owner was faced with having one rig sitting idle and earning no money for him while he incurred the costs of transporting another to and from the job, if not of having to purchase or rent an entirely different machine.

Not all cable excavators were convertible, however. With very rare exception, larger machines were still purpose-built, and in the heyday of convertible machines, the same basic machine could be equipped with different crawlers or other features to make it better suited for a specific application, especially lifting.

Moreover, cable backhoes larger than a couple of yards capacity were always rare, and the need to change out backhoe and shovel fronts was rendered moot as these machines—other than the giant shovels used in surface mining—became obsolete in the late 1960s and early 1970s.

To a very limited extent, the concept of convertibility carried forward into the hydraulic era. In the early 1970s, Northwest Engineering marketed its 30DH, 55DH and 100DH hydraulic backhoes as being fully convertible to cable cranes and draglines by interchanging modules on the machinery deck along with the attachments. Several manufacturers such as Liebherr, Demag and P & H offered large hydraulic excavators as backhoes or shovels but evidently not as convertible machines.

ULEMCo is showcasing its prototype ambulance powered by hydrogen fuel cells to world leaders at COP26, Walterscheid and dSPACE make strategic acquisitions and more news you may have missed.
Sara Jensen
November 3, 2021
Follow Us