Caterpillar continues to impress with its Built For It Trials 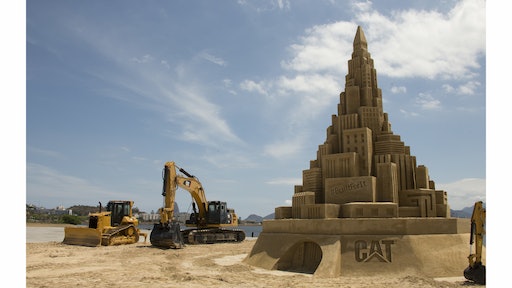 Back in April, we saw the first of the Caterpillar Inc.'s Built For It Trails video series with Stack: Largest JENGA® Game Played with Cat® Excavators which was a viral frenzy hitting over +1 million views in two days!

In the Sand Castle video, seven Cat machines (two hydraulic excavators, a wheel loader, two mini excavators, a vibratory soil compactor and a track-type tractor) transormed 960 cu. yd. of quarry sand and water - with the help of seven sand sculptors - into the towering creation over the course of 15 days. In the end, the castle stood 41 feet, 3.67 inches (12.59 meters) high, surpassing the previous record of 37 ft. 10 in. (11.53 m).

The goal of the "Sand Castle" short film is to prove that with Cat power and precision, you can build anything you imagine. "When the world’s your sandbox, you can think big—Guinness World Records big."

I wonder what they'll do next.

Click here to watch the Sand Castle Built For It Trial video.

Also, check out these other Guiness World Record breakers in the off-road industry: