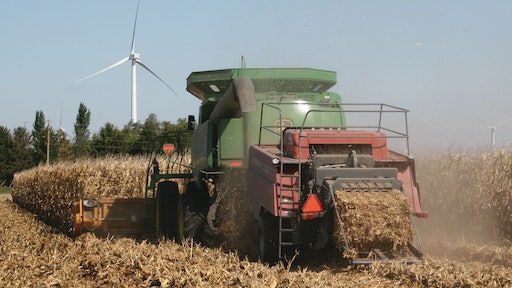 For biomass to work as a fuel option it must have value to the customer, be easy to transport, and provide a valuable return to the farmer who collects it.

“For biomass to be used as fuel, we need get rid of the bulk so the mills can handle it with common equipment,” says Jeff Orwig, manager, Pro-Hay LLC, Goodland, IN. “Power plants and paper mills require biomass material be supplied as a uniform product so they can use it with machinery that is already in place.”

That’s where companies such as Pro-Hay can play a roll. “Most everybody has conveyers, but they can’t handle baled material and the fluff goes out the chimney,” he says.

Four years ago, Pro-Hay starting selling alfalfa cubes to horse owners, but the business was seasonal. Orwig saw an opportunity to use equipment they had to compress and cube corn-based biomass to be used as fuel. The small, dense cubes work better in a power plant’s equipment and can be hauled more efficiently.

Quality in, quality out

The quality of the feedstock matters to Pro-Hay, too. “What concerns me with corn stalks is foreign material, such as rocks and dirt. Dirt isn’t a good fuel, it’s just ash, and it adds weight. We want as high a btu content that we can from the cubes.”

In order to prevent material pick-up and reduce trips through the field for the farmer, Tuthill Drive Systems recently introduced Bale Direct, a system in which a large square baler is connected to a combine to harvest and bale in a single-pass operation. Benefits include saving time, fuel, and labor, prevention of weed seed proliferation, and cleaner bales when compared to traditional baling methods.

Bale Direct’s design was developed in Australia nine years ago by a farmer who was looking for a way to remove weed seeds from his fields. Tuthill Drive Systems signed an agreement in February to produce and distribute the system in North America.

Tuthill Drive Systems has engineered products for the agricultural and off-highway markets for over 30 years, including the Mud Hog steerable hydraulic drive axles that are used on harvesters and other machines worldwide.

As a new product, Bale Direct fits within Tuthill’s expertise. “It’s combine-related, and it involves hydraulics and fabrication work, which we know,” says Darren Foster, ag marketing product manager, Tuthill Drive Systems, Brookston, IN. “It’s tied in with combines and sold through dealers -- which we know, too. We don’t view it as a fork in a road. It’s different but very much in line with what we have been doing.”

For Tuthill, Bale Direct is one more enhancement it can provide to the combine market, and it's one that works well with the Mud Hog axle.

Simply put, Bale Direct is a connection between the combine and the baler. The baler’s PTO drive is replaced with a hydraulic system that is separate from the combine’s. A hydraulic motor drives the baler, which is run via an engine-mounted pump. The combine’s chopper is not used, reserving plenty of horsepower to run the baler. Both machines can be returned to normal operation with a few hours' work.

While cellulosic ethanol is an obvious first customer, the system can also bale other crop residue such as wheat, or the baled material can be used for bedding.

Bale Direct only removes 1,200 lbs per acre, leaving some trash in the field for nutrients. There’s evidence removing some trash can be better for the field, too. “The stalks on today’s corn hybrids are tougher and stronger,” says Foster, “so they don’t degrade as easily. One customer we talked with said taking some debris off the field allowed the sun to warm it up earlier in the spring.”

POET, the largest ethanol producer in the world, is working toward the commercial harvest of biomass for cellulosic ethanol. Farmers around Emmetsburg, IA, baled corn cobs and stover to deliver to POET's ethanol operation. To store the bales, POET recently built a multi-million dollar stack yard next to where the first commercial cellulosic ethanol plant will be built.

POET welcomed the recent finalization of rules for the United States Dept. of Agriculture’s Biomass Crop Assistance Program (BCAP), which provides financial assistance to owners and operators of agricultural and non-industrial private land get in the biomass business.

“For several years, we have been working with university researchers, government agencies, farmers and agricultural equipment manufacturers to develop a system of harvesting, transporting and storing corn cobs and light stover,” says said Jim Sturdevant, director of project Liberty for POET. “While we have made tremendous progress, the matching payments from BCAP help motivate the first farmers to adopt these new practices.”

“Selling and delivering biomass to a farmer would be a new way of doing business for most farmers,” says Orwig. “Anyone can grow yellow corn and take it to the elevator, where they focus on price and production.

Orwig views biomass bales as a specialty crop: “you have to think about what the customer needs, and you have to do different things with your product to get it to market. The power plant doesn’t care what the farmer has to go through to get a product. They care about making power.”

AEM has released its Canada Ag Tractor and Combine Report for August 2020.
September 15, 2020

Despite the negative impacts of COVID-19 on the agriculture equipment industry, FederUnacoma says there is still a push toward mechanization which will aid eventual recovery.
July 27, 2020

CNH Industrial is helping lead the ConectarAGRO Association, which aims to bring the internet to the countryside and remote regions of Brazil.
CNH Industrial N.V.
July 27, 2020

In the latest episode of the new Tractor of the Year digital series, BKT and other industry experts discuss the growing importance of connectivity in agriculture.
BKT USA Inc.
July 16, 2020

A new IDTechEx report evaluates the growing use of electric vehicles and robotics in the agricultural industry.
July 13, 2020

"As we celebrate our 125th anniversary, at this unprecedented moment in history, we look to the future with confidence,” says Brand President Carlo Lambro.
New Holland Agriculture
June 15, 2020
Follow Us