Italian agricultural machinery sales at the end of 2016 were close to those from the prior year; a 19% surge in December was due partially to the opening of EU financing. 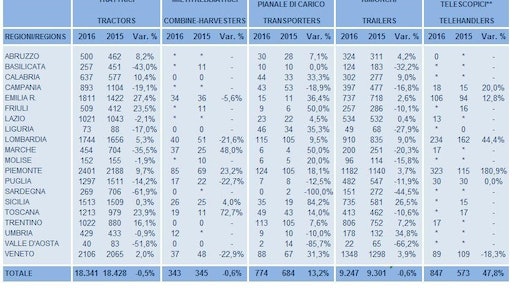 The Italian agricultural machinery market closed 2016 with sales close to the same as those reported for the previous year. Ministry of Transport data elaborated by FederUnacoma, the Agricultural Machinery Manufacturers Federation, showed a slight 0.5% downturn for tractors with 18,341 units sold against 18,428 in 2015, a 0.6% decline for combine harvesters with 343 sold compared to 345 in 2015 and trailers down to 9,247 against 9,301 moved the previous year. Transporters gained 13.2% showing 774 units sold compared to 684 and a steep increase of 47.8% came for agricultural telescopic handlers.

However, the domestic market slipped again to an all-time low and the only significant increase came for tractor registrations with a 19% surge in the month of December due partially to opening up financing allocated by EU Rural Development Plans and marketing policies applied by manufacturers and the network of dealers with incentives for purchasing before the end of the year. These steps managed to avoid a stronger decline of sales for the year just passed. There were considerable differences in sales over the national average in the individual regions bucking the downward trend. Tractor registrations climbed 5.3% in Lombardy, rose 9.7% in Piedmont, 2% in the Veneto and shot up 27.4% in Emilia Romagna, whereas the steepest drops came in Campania, down 19.1%, and Puglia, off by 14.2%.

FederUnacoma President Massimo Goldoni comments, "The Rural Development Plans are still the leading instrument of incentives for acquiring agricultural machinery and we hope they go along at full regime over the year and have a positive impact on the final balance sheet. On the other hand, we will not have the drive expected with the application of the INAIL, Italian National Institute for Insurance against Accidents at Work, incentives, because the deadline for filing requests has been extended from January 20 to April 28. This probably involves blocking purchases over the first part of the year."