A recent ACTFL report digs into U.S. employers' foreign language skills gap and how it negatively impacts their ability to do business. 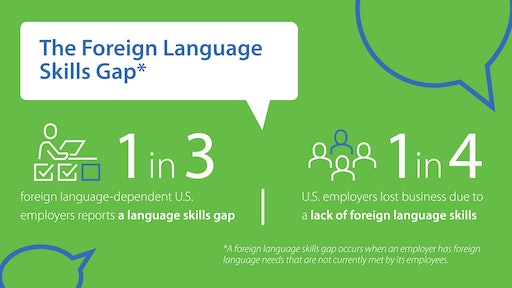 There is an urgent and growing demand for language skills in the U.S. workplace.
American Council on the Teaching of Foreign Languages (ACTFL)

As the world, and business, becomes more global, the need for foreign language skills is increasing. Manufacturers big and small are becoming more globalized, working with other manufacturers and suppliers on a daily business. Having the ability to speak another language can help a manufacturer work better with customers, as well as give it a competing edge at earning new business.

The American Council on the Teaching of Foreign Languages (ACTFL) recently conducted a survey of 1,200 U.S. employers and uncovered that language skills are in high demand across industries and functions — and that demand is expected to rise. ACTFL published the survey results in its report "Making Languages Our Business: Addressing Foreign Language Demand Among U.S. Employers." The report surveyed employers in construction, manufacturing, hospitality and travel, professional and technical services, healthcare and social assistance, education services, trade, and others.

That last finding is significant. It's not just co-worker communication that is affected by the language gap. Employers, even those who do not feel their company has a foreign language gap, are losing business or unable to pursue a business opportunity due to a lack of foreign language skills. In today's business environment, employers can't rely on their customers', suppliers' and partners' abilities to speak English. Companies don't just need to focus on closing the language gap between internal workers, but they also need to think about the people they interact with and depend on outside of their company walls. If you can't communicate to and with a customer (or a driver) who speaks a foreign language then you're losing out on business.

Having foreign language skills is no longer just a benefit for job communication and safety, it's becoming a necessity to do business. And it's not just management that needs to improve their foreign language skills. Think about your workers who interact with customers and others in the supply chain on a more frequent basis. If they don't have the language skills to speak with the other sectors of the supply chain it can negatively affect current and future business as well.

According to the report, Spanish is the most in-demand foreign language for all industries. Chinese, French, Japanese and German round out the top five. But for an industry like the supply chain, your company may encounter all these languages.