Nikola Corp. has released a statement reaffirming its development goals and current progress in bringing its battery and fuel cell powered trucks to market. 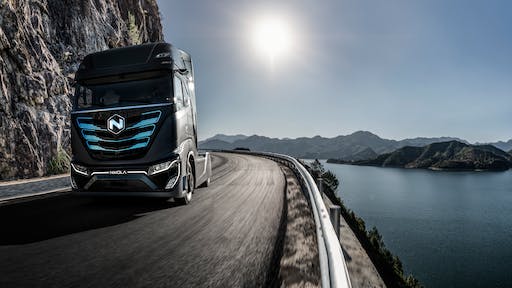 Nikola expects production of prototypes of the Nikola Tre to be completed soon.
Nikola Corp.

Nikola Corporation recently issued a statement highlighting key elements of the company’s strategy and vision to become a global leader in zero-emissions transportation.

In the statement, the company reaffirmed its efforts to develop next-generation truck technology which includes battery-electric and fuel cell-powered vehicles. A big part of these development efforts, it noted, is partnering with other companies to optimize designs and ensure what is being developed fits industry needs. Nikola says in the statement bringing together strategic business partners and suppliers significantly reduces execution risk, improves commercialization timelines, and builds long-term competitive advantages.

Companies it is partnering with include the Bosch group of companies, CNH Industrial N.V., Hanwha Group and Nel Hydrogen. The company notes in the statement that Bosch was an early investor in Nikola, leading the Series B and C private investment rounds, and the companies have filed jointly owned patent applications related to batteries and fuel-cell technologies.

In 2019, CNH Industrial became the company's lead investor in the Series D private investment round, and has been instrumental, through its IVECO and FPT Industrial business units, in de-risking the commercial truck manufacturing process and accelerating the process of bringing a leading Class 8 battery-electric semi-truck to market.

With support from our business partners and suppliers, we are focused on executing on our strategic initiatives and laying the groundwork to become a vertically integrated zero-emissions transportation solutions provider, Nikola says in the statement.

In its statement, Nikola also lays out current and future milestones for its development efforts. The company says it is continuing to make progress on achieving them.

Following is a list of the milestones as noted in its statement. 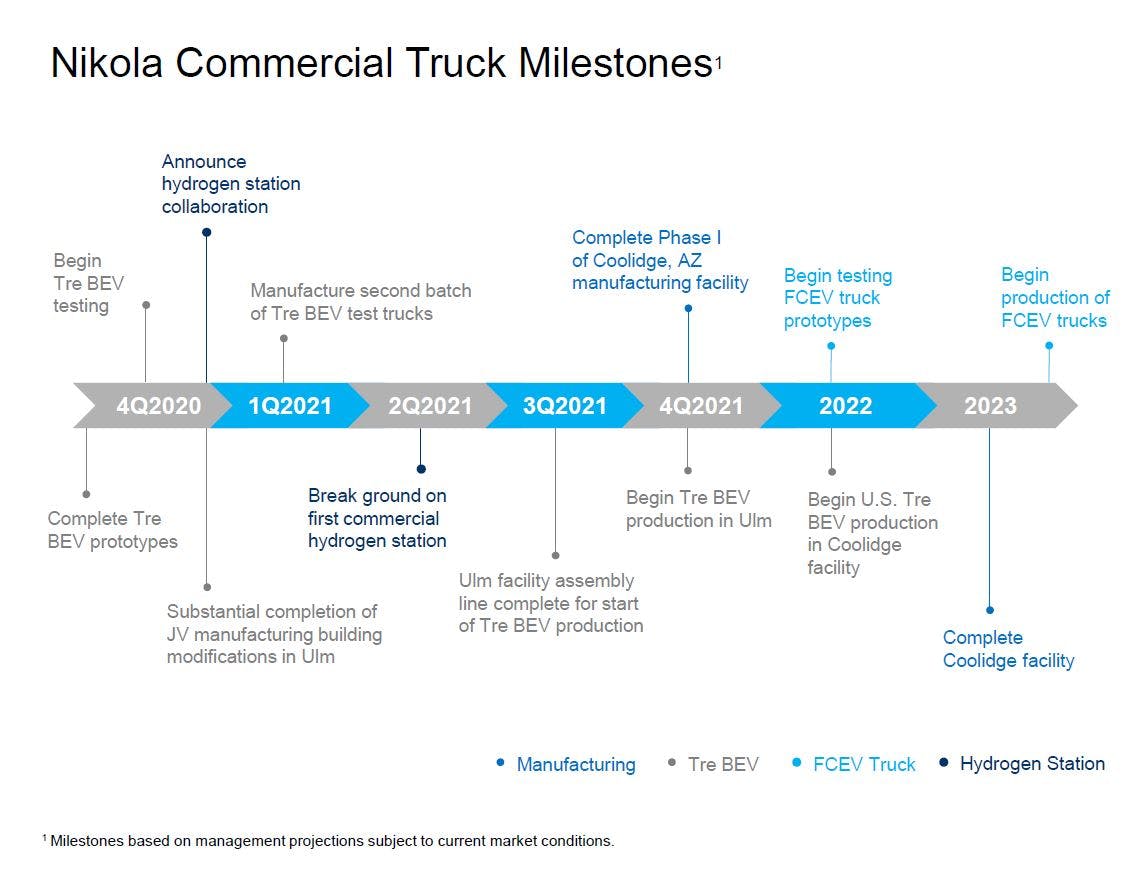 Nikola expects the first batch of five prototypes of the Nikola Tre, a 100% battery-electric truck, will be substantially completed at our JV facility in Ulm, Germany in the next few weeks. The Nikola Tre prototypes will be subsequently bench tested as well as road tested in Germany. We remain confident in our ability to begin production of the Tre and make it available to customers starting in the fourth quarter of 2021.

Our joint venture with IVECO for the Nikola Tre illustrates the power of our business partnership and supplier network and go-to-market model. Nikola has engineered, in conjunction with its business partners and suppliers, the electrification elements of the Nikola Tre. During this process, Nikola engineers have taken the lead on the Human Machine Interface, infotainment, battery pack engineering and integration into the e-propulsion architecture, vehicle thermal management, and the e-axles. The vehicle controls architecture has been developed solely by Nikola. For the balance of the Tre BEV, Nikola leverages validated and homologated IVECO components to drive cost efficiencies.

Bosch's rotor, stator and inverter products and related expertise, and FPT Industrial’s industrialization expertise and experience, have enabled Nikola to move quickly on an aggressive path to bring its electric truck e-axles to market. 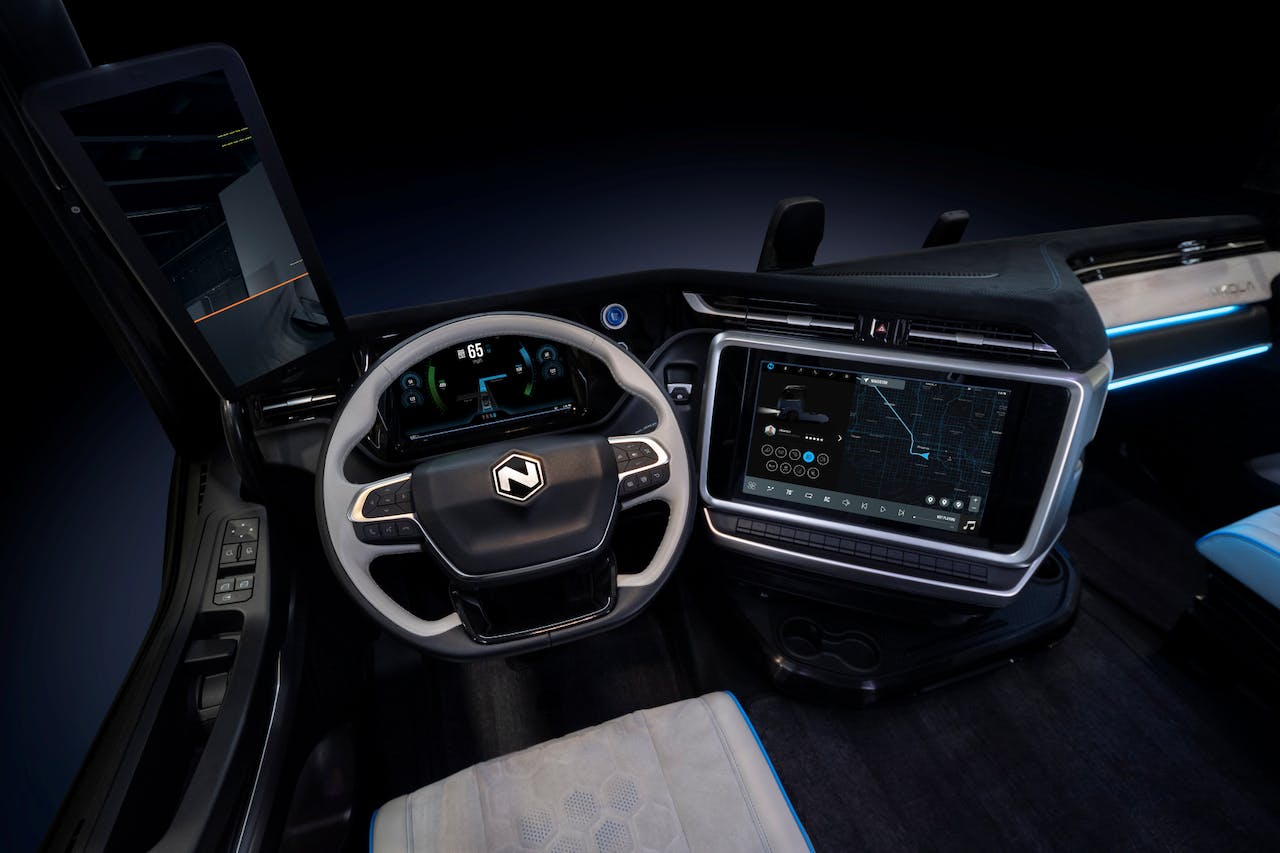 The HMI design for the Nikola Tre which is fully integrated with systems and components on the truck.Nikola Corp.

Nikola expects to begin testing production-engineered prototypes of its hydrogen fuel-cell powered semi-trucks for the medium- and long-haul trucking sectors, by the end of 2021. FCEV beta prototypes are expected to be tested in the first half of 2022. Anheuser Busch LLC previously announced its placement of an order for up to 800 trucks. Nikola is currently evaluating additional strategic partners and supply chain arrangements.

Bosch has been instrumental in helping to integrate heavy-duty fuel-cell power modules into Nikola trucks. Nikola is defining and engineering the architecture of the truck, vehicle technical specifications, features and functions, and styling theme.

Hydrogen as a Competitive Advantage

Nikola’s planned network of fueling stations are central to its business model and to advancing hydrogen fuel-cell based transportation.

Nikola continues to make progress on the development of its 1 million sq.-ft. manufacturing facility in Coolidge, AZ. The company is on schedule to complete Phase 1 of construction by the end of 2021, with construction intended to be fully complete by mid-2023. The greenfield facility will initially produce battery-electric trucks and, subsequently, will produce fuel-cell electric trucks. The facility will have the capacity to produce 35,000 Class 8 commercial semi-trucks annually, running two shifts, with approximately 1,800 new full-time positions.