Terex was one of several companies to partake in the trade mission to promote opportunities for U.S. business in China. 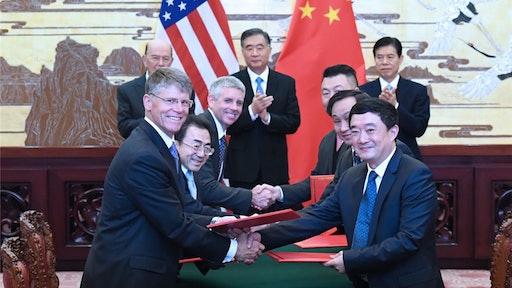 Terex Corporation joined 27 other companies on the U.S. Trade Mission to China led by President Donald Trump and Secretary of Commerce Wilbur Ross and hosted by China President Xi Jinping. The mission’s purpose was to promote commercial opportunities for U.S. business in China.

During the mission, Terex Utilities and Xuzhou Handler signed a letter of intent for Xuzhou to purchase 5,000 units of insulated aerial devices from Terex over a 5-year period, with a total value of more than USD 250 million. These products will enable and support the continuing improvement and ongoing adoption of live line work practices in the Chinese public utility sector. The signing was witnessed by Secretary Ross and China’s Vice Premier Wang Yang.

“It’s been an honor for Terex to participate in the Trade Mission,” says John Garrison, President and CEO of Terex Corporation. “The visit helped us to renew our longstanding relationships in China and to build new ones. We thank Xuzhou Handler for their business and look forward to working with them and with other customers and prospective customers in China to continue to advance safe work practices for working at height and on live lines. In so doing, we expect that all involved will benefit from expanded business opportunities.”

Terex has been committed to driving the adoption of safe work practices in China and engaging in mutually beneficial business relationships for almost three decades. The company currently has more than 600 team members in China with facilities in Beijing, Shanghai and Changzhou. Since 2013, Terex has organized a series of safety focused reverse trade missions and executive training programs in the United States. Terex partnered with China’s State Administration of Work Safety to facilitate enactment of standards and regulations relevant to work at heights and heavy lifting safety and partnered with the U.S. Trade Development Agency to promote ‘live-line’ awareness at China’s State Grid and Southern Grid. These relationships have helped to cultivate a growth market environment for Terex Corporation’s technologies and products, including Genie aerials, Terex insulated aerial devices and Terex and Demag cranes.