McNeilus is celebrating the production of its 100,000th concrete mixer which features the company’s most advanced technologies, including Street Smart Vision system and FLEX Controls for more precise mixing. 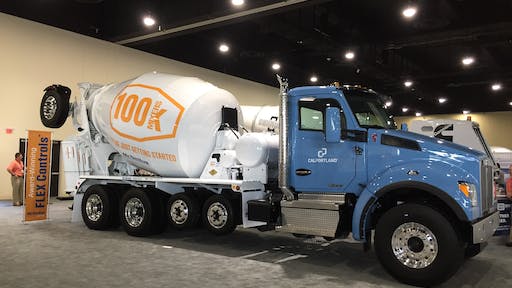 McNeilus Truck and Manufacturing Inc., an Oshkosh Corporation company, is recognizing the manufacture of its 100,000th concrete mixer, making the record-setting machine one of the highlights of its booth at ConcreteWorks 2018, at the Gaylord National Resort & Convention Center, National Harbor, MD.

“This is a tribute to the proud legacy our people have built over more than five decades,” says Jesus Crespo, VP and General Manager of McNeilus Concrete Mixers. “From design and engineering to manufacturing and sales, this organization has worked hard to create trucks that lead the industry and deliver solid added value for our customers every day and we’re just getting started.”

The history-making McNeilus Bridgemaster mixer, which rolled out of the factory on Sept. 21, features all the company’s most advanced technologies, including:

At the conclusion of the show, the keys to the landmark mixer were turned over to its new owner, CalPortland. The truck will be going to the company’s Glacier Northwest location in Washington state.

“We’re thrilled to have the 100,000th McNeilus mixer in our fleet,” says Steve Mitchell, VP of Asset Services at CalPortland. “It’s always a big event when we get a new truck with all the latest equipment and technology. We’ve been a McNeilus customer for decades and it’s an honor to be a part of this monumental production milestone.”

In addition to the 100,000th mixer, the McNeilus booth at ConcreteWorks also featured FLEX Controls and an Oshkosh S-Series Front Discharge mixer with Cummins X12 Engine.

A number of chassis partners – including Kenworth, Mack and Navistar International –displayed McNeilus mixers as a part of their ConcreteWorks displays. The truck in the Kenworth booth was purchased in a pre-show auction benefiting the RMC Research and Education foundation, which funds research and educational programs to improve quality, sustainability and professionalism in the ready mixed concrete industry. The mixer was purchased by Concrete Supply Co. of Charlotte, NC.

Several manufacturers in or related to the heavy equipment industries will exhibit at CES 2022, one of the biggest technology shows of the year.
Sara Jensen
December 21, 2021
Follow Us