Octavio Miranda is the winner of Case's Triple Threat Rodeo, held at World of Concrete 2012, which helped raise over $50,000 for Habitat for Humanity. 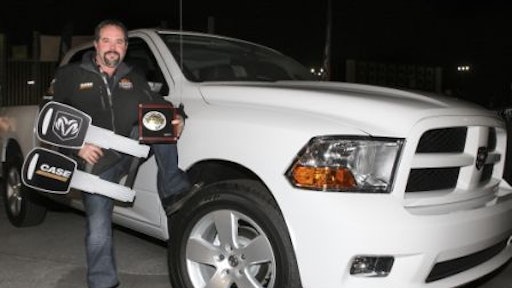 Case Construction Equipment has crowned the champion of its Triple Threat Rodeo series, following an exciting day-long competition among 59 of the United States and Canada’s most talented equipment operators at the 2012 World of Concrete show in Las Vegas. Case awarded prizes with a total value of approximately U.S. $140,000 at the competition’s conclusion.

Octavio Miranda, of Ancaster, Ontario, was named the Case Triple Threat Rodeo North American Champion and won a 2012 Ram 2500 truck for himself and a new Case TR270 compact track loader and a Towmaster trailer for his sponsoring company, L.M. Enterprises.

Also benefitting from the Triple Threat Rodeo program were Habitat for Humanity affiliates across North America. Case presented a corporate contribution of U.S. $5,000 to Habitat for Humanity Las Vegas at the championship event, one year after kicking off the Triple Threat Rodeo program with an identical U.S. $5,000 donation. In addition, each participating Case dealership made a donation to its local Habitat affiliate, bringing the total raised during the program for Habitat affiliates to U.S. $51,726.

Miranda, Long and Lesher proved their skills during the Triple Threat Rodeo Championship operating a Case F Series wheel loader, N Series loader/backhoe and Alpha Series skid steer through a demanding course of challenges that simulated some of the most difficult applications facing equipment operators in their day-to-day jobs. They earned their place among the five finalists who competed in an extreme test of skills to win their ranks as champion, second- and third-place finishers.

“We congratulate Octavio Miranda for his victory in the Case Triple Threat Rodeo Championship,” says Rob Marringa, Case brand marketing manager. “And we applaud all of our competitors in demonstrating their professionalism and skill as worthy representatives of their trade.”

World of Concrete – the largest international tradeshow dedicated to the commercial concrete and masonry construction industries – served as the backdrop for the Case North American Triple Threat Rodeo Championship. Case hosted the event at its outdoor exhibit adjacent to the Las Vegas Convention Center.

“The Case Triple Threat Rodeo gave the best equipment operators in North America a chance to show off the skills they use every day on the job,” Marringa says. “Each rodeo event required the competitors to demonstrate their mastery of a variety of equipment operations, in terms of both speed and accuracy.”

Competitors earned their way from field of 1,500 operators

From a field of more than 1,500 participants who competed in Case Triple Threat Rodeo events across the United States and Canada this year, the winners of local rodeo events each qualified to compete at the championship event. The local winners also received U.S. $500 in cash and Case gear.

Attracting more than 10,000 visitors, the local rodeo events proved successful in terms of competitors, overall attendance and fundraising efforts in support of Habitat for Humanity affiliates.

Combined with funds raised through earlier equipment rodeos and other company and dealer events, Case and its dealers have contributed an aggregate total of more than U.S. $250,000 to local Habitat for Humanity affiliates.

“Case and our dealers share a commitment to support the communities in which we do business,” Marringa says. “We are proud of the many ways in which our company, employees and dealers have responded to community needs over the years.”