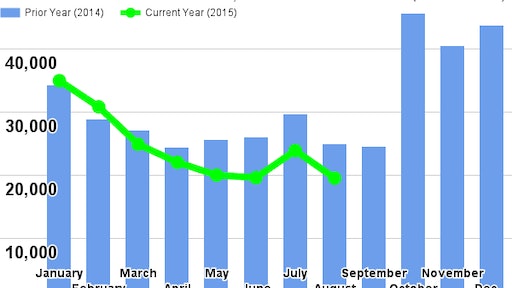 FTR has released preliminary data showing August 2015 North American Class 8 truck net orders at 19,550 units, the lowest level since September 2013. Orders for August were down 18% versus July and 22% year-over-year. With the exception of July, which was positively impacted by a new large fleet order, the pace of recent Class 8 orders has been consistent, within 2,000 units each month since May. With the heavy ordering that proceeded this period, Class 8 orders over the past 12 months have annualized to a solid 350,000 units.

Don Ake, FTR Vice President of Commercial Vehicles, comments, "Historically August is one of the lowest ordering months, so if we have bottomed out at 20,000 units, that’s positive. It shows the market is stabilizing at a fairly high rate resulting in a reasonably soft landing as production begins to moderate. We expect orders to remain at this level in September before steadily rising beginning in October."

Final data for August will be available from FTR later in the month as part of its North American Commercial Truck & Trailer Outlook service.