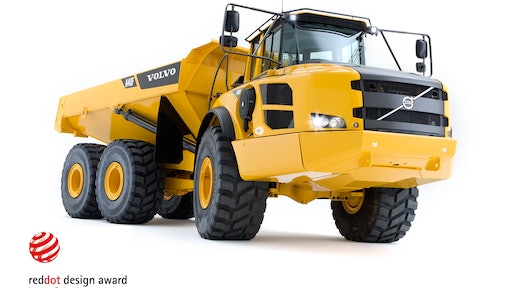 The A40F articulated hauler from Volvo Construction Equipment (Volvo CE) beat thousands of international products and wowed a panel of design experts in Essen, Germany, to win a red dot: best of the best award – an internationally recognized quality label for outstanding design achievement and one of the world’s most sought-after seals of design quality.

The red dot product design awards 2012 honor outstanding industrial design and celebrate the team behind the concept. The red dot: best of the best award is presented for groundbreaking design and is the top prize, reserved for the leading products in each category. Only the very best innovative works, from 19 categories, managed to convince the international jury – and this year 4,515 products were entered by designers and companies from 58 countries worldwide. Volvo’s A40F was awarded the prestigious prize in category 16: automobiles, transportation, commercial and water vehicles. Last year, the company’s L220G wheel loader received a red dot product design award for the machine’s fuel efficient and productive design.

“I speak on behalf of the whole company when I say we are extremely proud to win such a highly respected award from the largest, most distinguished design competition in the world,” says Anders Larsson, executive vice president of Volvo CE’s Technology function. “This award symbolizes the creativity, hard work and innovative spirit we have at Volvo. It is fantastic that the A40F has received this globally-recognized mark of industrial design quality and we are delighted that it’s getting the recognition it deserves.”

Volvo CE’s A40F articulated hauler has been designed to set new standards in the market that Volvo created in 1966 when it invented the world’s first articulated hauler – ‘Gravel Charlie.’ The machine is the flagship of Volvo CE’s market leading and innovative F-Series range of haulers and features improvements in design, functionality and maintenance. The hauler maneuvers, travels and dumps its load in the most efficient and safest way and is more fuel efficient than the previous E-Series model which, until now, was the class leader for low fuel consumption.

“I am thrilled that the red dot jury has recognized the groundbreaking qualities of the Volvo design,” says Stina Nilimaa Wickström, design director at Volvo CE. “The Volvo hauler has been pushing the boundaries of technology and design since the initial model in 1966 and with this award we have proven that we are still the undisputed market leader.”

“The expert jury thoroughly examined, tested and evaluated each individual entry applying the highest standards,” says Professor Dr. Peter Zec, the initiator and CEO of the red dot design award which has been running since 1955. “With their performances, the laureates not only demonstrated extraordinary design quality but they also showed that design is an integral part of innovative product solutions.”

More than 1,000 guests from the world of design, industry, society and media will celebrate the red dot award winners on July 2 in Essen’s opera house, the Aalto Theater. The Volvo A40F articulated hauler will then be displayed during a four-week special exhibition in the red dot design museum, together with the other prize-winning products from July 3 to 29 2012. After this the products are integrated in the permanent exhibition at the museum and displayed there for at least one year. The museum is located at the world heritage site of the Zeche Zollverein Coal Mine Industrial Complex in Essen and houses the largest permanent exhibition of contemporary design worldwide.