Rapid construction of railroads heightened the need for fast-moving hammers, which encouraged the development of self-propelled pile drivers. 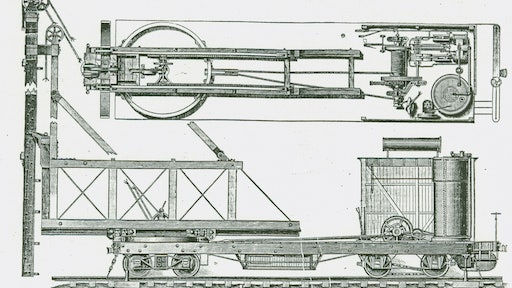 Construction of bridges and other structures often requires the driving of piling for support, and there have been several ways of doing this work.

The first pile hammers were simple gravity drop-hammers. The lead was erected over the piling; the weight was lifted by a hoist; and it was dropped onto the piling. Mechanized pile hammers first used steam to force the hammer up. Later, compressed air or the ignition of pressurized diesel fuel provided the force to lift the hammer. In each case, the goal was the same: To quickly and repeatedly raise the weight and drop it with maximum force onto the piling.

Getting the hammer to the work was another matter. Mobility was a benefit not to be overlooked, and with the rapid construction of railroads came the need to quickly move from one bridge or trestle to another. Industrial Works and its competitors solved this problem by mounting pile hammers onto railroad derricks and cranes. Initially these rigs needed to be positioned by a locomotive, but as early as 1885, self-propelled pile drivers were developed, and quickly became the standard.

While details varied with the model of pile driver, Industrial Works sales literature gives some insight into these machines. Travel speed under their own power could reach 20 miles per hour, and they could be moved entrained under limited speed. The hammer was either gravity or steam-operated, and was mounted on leads that were typically 45 feet high. The leads could be erected from the flat transport position by engine power in thirty seconds, and were mounted on a telescoping truss that could be extended from 16 to 20 feet ahead of the forward wheel’s centerline, again depending on the model. The truss could be slewed up to ninety degrees left or right, allowing piles to be driven up to 20 feet from the center of the track, and the leads could also be angled up to three inches per foot through a battering attachment consisting of a worm gear with rack and pinion.

As market saturation all but halted new railroad construction in the 1920s and early 1930s, the need for railroad pile drivers dwindled; but there was still a limited need for them in applications such as bridge replacement and rebuilding. Like its cousin the locomotive crane, the railroad pile driver transitioned from steam to diesel, and as large crawler and truck cranes were developed, they became the standard means of mounting and operating a pile driver.

There was another type of self-propelled, mobile pile driver. Contractor Raymond International designed and built a fleet of massive steam-powered rigs for use in large building foundations. The Raymond pile drivers were initially mounted on skids, but later versions were on crawlers to facilitate their on-site mobility. A Raymond pile driver that was converted to a crane has been preserved by the Roots of Motive Power logging museum in Willits, CA.