Looking Back at 10 Years of Innovation: SuperTruck Continues to Bring Technology Advancements

The SuperTruck program has brought about new technology developments and demonstrated the high level of engineering capabilities of the heavy-duty vehicle and equipment industries. 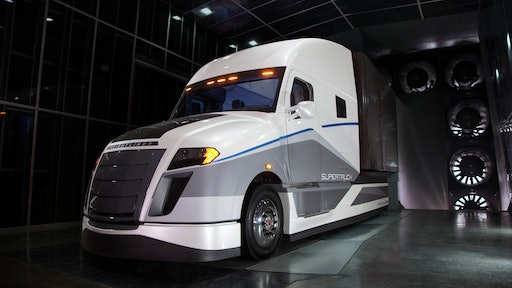 As I approach 10 years with OEM Off-Highway, I thought it would be interesting to spend this month's blogs looking back at some of the more popular articles we've done in the past decade, and how the technologies covered in them have progressed.

With the U.S. Department of Energy (DOE) announcing during the virtual Work Truck Show it intends to conduct a third phase of its SuperTruck program, I thought it was a perfect opportunity to look back at one of the first major articles I ever wrote for OEM which just happens to be about the SuperTruck program.

Read our original article on the SuperTruck program.

First initiated in 2010, SuperTruck set out to improve heavy-duty Class 8 truck efficiency 50%. This was to be achieved through improvements to both the tractor and trailer, as well as the engine. Teams of companies from the heavy-duty truck manufacturing industry including Cummins, Daimler, Navistar and Volvo were awarded cost-shared projects by the DOE.

As the program neared its end in 2015, many of the companies participating in the program were able to demonstrate that their SuperTruck designs could meet, and in some cases even surpass, the 50% freight efficiency improvement. The companies were able to achieve these improvements through advanced aerodynamic designs and enhancements to to the engine such as reductions in parasitic losses and changes to the aftertreatment system. There were also early research efforts put into fuel cells and hybrid electric powertrains.

From this project the participating companies were able to demonstrate what was feasible. Many of the technologies were also later adapted to their own product designs. Volvo, for instance, incorporated wave piston and turbo compounding technologies developed during SuperTruck into its 2017 powertrain offering.

And it's not just the trucking industry which has benefited from the program's research. A CALSTART webinar held in 2015 noted the potential for the technologies developed during SuperTruck to be used in military vehicle applications, as well. Like the trucking and other heavy equipment industries, the military is also looking to reduce emissions while improving efficiency. It demonstrates too that despite the differences between many of the vehicle and equipment industries we cover, there are also many similarities and shared technologies.

In 2016, the DOE announced a second phase of the SuperTruck program which challenged manufacturers to demonstrate a greater than 100% freight efficiency improvement. For SuperTruck II, an emphasis was placed on the performance and cost-effectiveness of the technologies to be used as they would have shorter returns on investment and have a greater chance of success in the market.

Once again, project leads for the 5-year program are Cummins, Daimler, Navistar and Volvo; PACCAR also joined the program in 2017. The companies will work with research labs and other manufacturers from the industry to develop their technologies. In 2019, the companies presented their progress thus far; no further updates have yet been announced, but the program should be wrapping up in 2021.

What has always intrigued me and made the SuperTruck program fun to write about is the high level of engineering that goes into this project and the fact it brings together a variety of companies to advance the industry forward. To me, this is the sort of thing which encapsulates what the industries OEM Off-Highway covers are about.

Projects like this are interesting to watch because of the amount of research and development (R&D) involved, and the unique solutions which often come from them. While those solutions may never make it to market, they can at least inform other new innovations and show what could be possible. These types of projects also show the willingness of our industries to invest so much into R&D and that they can be more advanced than some may otherwise think.

With SuperTruck 3 on the horizon, I'm looking forward to seeing what's coming next.

What technologies do you think will be used in the next SuperTruck program? What developments from the previous programs have potential in the industry? Let us know!

Top 10 Articles of the Past Decade

This technology keeps the air clean during the cutting of hydraulic hose assemblies and protects the operators from fine particles.
UNIFLEX
May 31, 2022
Follow Us