Recent international design award announcements shine a spotlight on engineering and innovation in the heavy-duty on- and off-highway mobile equipment industries. 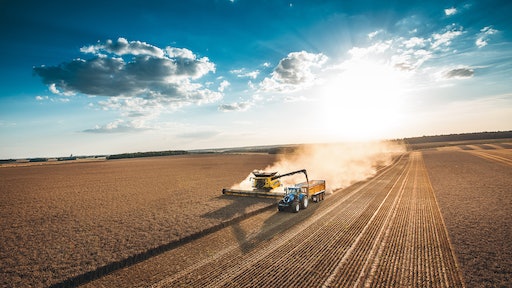 New Holland combine technologies are among many of those from the heavy equipment industry recently honored with international design awards.
New Holland Agriculture

Every industry has various awards it bestows upon companies and individuals to honor their achievements, and the heavy equipment industries are no different. There are several awards given out each year; some by industry associations and others which are affiliated with large trade shows.

There are also large international awards programs, like Red Dot and iF DESIGN AWARD, which recognize designs in an array of industries. Both international competitions recently announced the winners of their 2021 awards; several heavy equipment manufacturers and component suppliers were included in both lists of award winners.

Through these awards programs, OEMs and component manufacturers can highlight their varied innovations. They can include products which are available and in use in the market as well as design concepts for what could be available at some point in the future.

Whatever the case, it offers an opportunity for the heavy equipment industry to demonstrate its innovativeness, engineering talent and current and future industry trends.

Several awards programs have recently announced winners for their 2021 editions, with companies including John Deere, Liebherr, Volvo, New Holland and others from the heavy equipment industry being honored.

The 2021 iF DESIGN AWARD had almost 10,000 entries submitted, reports iF International Forum Design GmbH which runs the awards program. To give perspective, in 2020 it says there were just 7,298 entries. From those entries, 1,744 winners were chosen, 75 of which were also honored with an iF gold award to further emphasize outstanding designs and innovation.

The iF DESIGN AWARD is considered one of the most prestigious design awards in the world. Its goal is to honor design achievements in a variety of industries and disciplines.

Winning designs are chosen by an international jury consisting of 98 jurors from 21 countries with expertise in industries as varied as those which are submitted for the award.

Awards were presented in nine categories:

A global digital campaign will be launched this year to promote the winners, and will be launched May 10 which is when the in-person awards ceremony is normally held. All winners will be included in the iF WORLD DESIGN GUIDE and as well as published in the new iF design app.

The SIMA Innovation Awards are held in conjunction with the biannual SIMA farm machinery exhibition and are given out to innovative equipment, products, techniques and services in the agricultural industry. While the trade show has been postponed until November 2022, a digital ceremony was recently held to announce the winners of the 2021 SIMA Innovation Awards.

Gold, silver and bronze medals were given out in four categories:

In addition, two special award were given out in the fields of:

New Holland Agriculture is one of several companies which have announced it received a 2021 award. Two of its combine harvesting technologies received silver and bronze medals. Per a press release from parent company CNH Industrial on the topic, The silver medal was awarded in the “From Harvest to Storage” category for New Holland's NutriSense, an in-harvest nutrient analysis system which collects agronomic data enabling farmers to make informed decisions in order to maximize their sales. Integration of a Near Infrared (NIR) sensor in this system enables the analysis, recording and mapping of crop composition during harvest.

The company received a bronze medal in the “Parts, Services and Onboard Electronics” category for its Cleaning system pressure sensors. According to CNH's press release, the patented cleaning shoe pressure analysis system enables a faster harvesting speed while guaranteeing maximum quality. The system measures the pressure in the cleaning shoe of the combine and alerts the operator as to whether any adjustments are required enabling them to optimize the harvest.

Some of the additional 2021 SIMA Innovation Awards winners include:

Named after Thomas Edison, the annual Edison Awards are given out in various categories with Gold, Silver and Bronze winners in each category. Winners are selected based on four criteria: Concept, Value, Delivery and Impact.

New Holland Agriculture was a recipient of this award, as well. It received a gold medal in the Sustainable Farming Solutions category for its Loop Master knotting technology utilized in its BigBaler 1290 High Density and BigBaler PLUS. The company says its loop knotting process eliminates twine off-cuts from being discarded in the field resulting in cost and environmental benefits.

Caterpillar Inc. also received a gold award under the Smart Productivity Tools category for its Cat Command station which enables machine control from several miles away. The system allows operators to comfortably and safely operate machines via a remote console/station. The remote control station is part of its family of Cat Command products which automate various machine functions to help create safer and more efficient job sites.

Red Dot recently announced the winners of its 2021 Product Design award. An entire category of this international design award is dedicated to commercial vehicles. According to Red Dot, winners of the 2021 award exemplified several trends currently dominating the heavy equipment and other industries including electromobility, automation and sustainability.

Winners will be published on Red Dot's website in June, and will be on display at the Red Dot Design Museum Essen.

OEM Off-Highway also bestows its own award to honor the components on our website which have the most views, the Top New Products Award. Doing so allows us to recognize not only some of the newest innovations in our industry, but also provide insight into what is popular with our audience as winners are determined by page views.

Winners are announced in our November/December issue as well as featured in our Year in Review digital issue. Subscribe now to ensure you're receiving the news as soon as it's published.

What new technologies have you seen introduced recently that you think are innovative? What new innovations do you see on the horizon? Let us know!