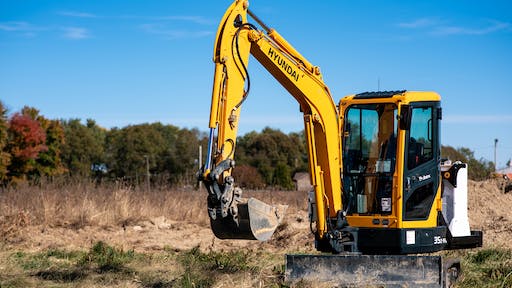 Cummins is supplying its BM4.4E flexible battery modules for use in the electric mini excavator it is jointly developing with Hyundai Construction Equipment.
Cummins Inc.

Electrification has been increasing in most market segments as of late, including the construction equipment industry. This has been due to the necessary technologies becoming more mature and affordable—aided by their development and use in the on-road segment—as well as increasing emissions regulations. Several cities around the world have announced they will ban the use of diesel within city limits, impacting not only roadway vehicles but also the equipment working in those cities.

Because of this, many manufacturers have already developed, or are in the process of developing, electric construction equipment. Doing so ensures the equipment will be ready and available for customers in time for the implementation of the regulations.

While much of the talk regarding electrification has revolved around on-road vehicles, a new report from IDTechEx Research shows off-road electric vehicles may be a more dominate marketplace. By 2029, the report says the majority of CAM (construction, agriculture and mining) vehicles sold will be electrically powered.

Electrification was one of the major trends at this year’s bauma, with companies including Volvo Construction Equipment (CE), Mecalac and Wacker Neuson introducing electric powered equipment. According to a Messe Munchen press release on the subject, smaller equipment is where much of the initial focus is being placed for construction equipment, as well as hybrids which use electric power for lighter work and a combustion engine for maximum power. Read more about the electrification products on display at bauma 2019 in the blog “bauma 2019 Goes Electric.” 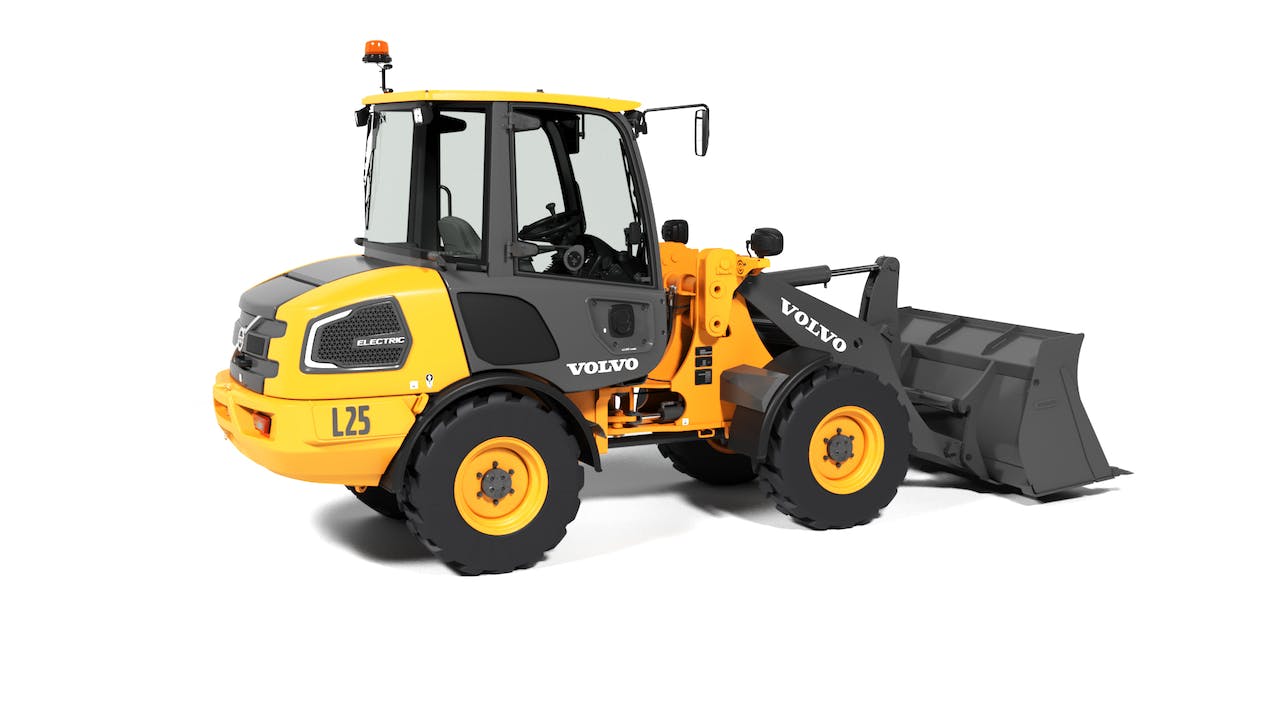 Volvo CE says it sees diesel remaining as the most appropriate power source for larger equipment, but electric propulsion and battery technology suiting smaller machines due to the lower power demands. “The technology we have been developing is now sufficiently robust and this, together with changes in customer behavior and a heightened regulatory environment, means that now is the right time to commit to electromobility in our compact equipment ranges in the future,” said Volvo CE President, Melker Jernberg, in a press release announcing the launch of its first electric machines.

Volvo’s new ECR25 electric compact excavator and L25 electric compact wheel loader which were unveiled at bauma are operated by lithium-ion batteries which replace the combustion engine. In the ECR25, the batteries are paired with an electric motor which powers the hydraulics. The batteries are capable of storing enough energy to power the machine for 8 hours in most applications. The L25’s batteries also enable a full 8-hour work day on a single charge. Two electric motors are included on the wheel loader, one for the drivetrain and one for the hydraulics, to help power the machine.

The company’s Electric Site project has played an important part in its electrification developments. Over the course of 10 weeks, several battery electric and electric hybrid machines were put to work in a customer’s quarry near Gothenburg, Sweden. The aim was to electrify each transport stage in a quarry to reduce emissions, as well as create a safer, more efficient job site. This was achieved through use of autonomous prototype Volvo CE machines, new work methods, and site management systems. Initial test results showed a 98% reduction in carbon emissions, 70% reduction in energy cost and 40% reduction in operator cost. 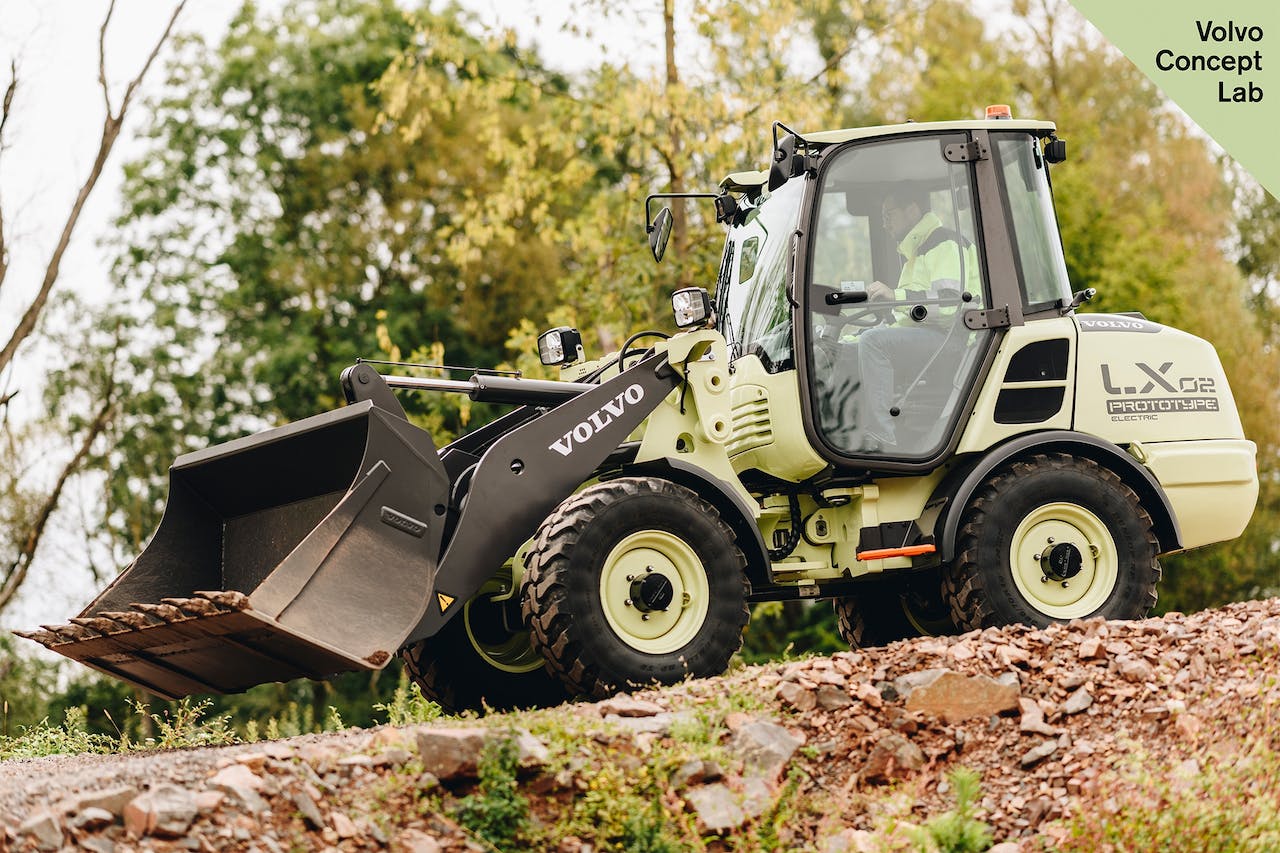 Volvo CE's LX2 is a second-generation prototype that is part of a research project and is not commercially available (learn more, 21022147).Volvo Construction Equipment

Electrification can offer many benefits beyond reducing emissions. Minimizing or completely eliminating the use of an engine in electrified equipment enables a reduction in noise levels, leading to improved comfort and safety for operators and others on the job site. This also allows the equipment to be used inside buildings, inner-city work sites, and other noise-sensitive areas.

Hidromek, which launched its HMK 70W electric excavator at bauma, notes the reduction in fuel consumption—leading to lower operating costs—as well as lower maintenance costs as additional benefits electric construction equipment can provide. Using the engine less, or not at all, means less fuel is used and purchased by the customer. The electric components used in machines such as this tend to be more efficient, and at times take the place of those used in traditional equipment, aiding the reduction in maintenance costs.

Volvo CE’s LX1 prototype electric hybrid wheel loader used in its Electric Site project is capable of providing a 50% increase in fuel efficiency. The machine is a series hybrid incorporating a driveline composed of electric drive motors mounted at the wheels, electric-driven hydraulics, an energy storage system, a smaller diesel engine and new machine architecture. This combination enables the electrified machine to provide such a large improvement in fuel efficiency, says the company.

As with on-highway vehicles, length of charge and how a machine will be recharged are areas of concern for electric construction equipment. Manufacturers have of course taken these factors into account, knowing customers will not purchase machines incapable of easily being recharged or lasting through a whole work day. For its electric wheel loaders, Wacker Neuson includes an integrated onboard charging unit for the battery which allows the machines to be plugged into a standard outlet instead of needing fixed charging stations on site. The wheel loaders are also able to work up to 8 hours on a single charge. Learn more about the Wacker Neuson machines, as well as other electric wheel loader designs, in the article “Eliminating Emissions Increases Application Opportunities.” Mecalac is moving forward with production of its e12, which will be delivered to customers near the end of the year.Mecalac France S.A.S.For its e12 electric compact wheeled excavator, Mecalac chose to use LiFePO4 (lithium iron phosphate) battery technology to provide an 8-hour working range and service life that is three times longer than classic batteries. Doing so ensures customer productivity will not be compromised. “Any electric engine must meet three major challenges: range, performance and compactness. The Mecalac e12 is the first 100% electric excavator that does not compromise on any of those three criteria. The key to our machine’s range and performance is in its very architecture. The power source — which is separate from the upper structure — means we can install a record capacity of 146 kWh, which results in an unrivalled range of 8 hours,” explained Patrick Brehmer, Head of Design and Product Management in a press release announcing the machine’s launch at Intermat 2018.

The company chose to partner with Dana Inc. on the development of the machine. Dana provided its Spicer 112 axles and 367 shift-on-fly transmission to help the e12 deliver the range, performance and compact size required of urban construction equipment. "As the European construction market embraces the trend toward zero-emission standards for small- to mid-sized vehicles, our customers are demanding great strides in efficiency while also requiring reliable performance," said Jean-Baptiste Rousseau, Technologies Manager at Mecalac. “Dana was able to adapt the 12MTX drivetrain to add electric drive capabilities within our existing vehicle architecture. With their technical expertise and open collaboration, we developed an optimal solution and accelerated the delivery of this vehicle to market.”

Engine manufacturers such as Cummins and Deutz are developing electric powertrain systems, as well. Both companies have developed hybrid systems which combine a smaller combustion engine with electric motor, battery and other electronics to provide cleaner. The companies are also developing full electric and other alternative power options to give manufacturers solutions which will best fit their application needs. Read more in the article “Embracing the Electric Transformation.”

Last year, DEUTZ AG announced it was providing Manitou Group with its prototype electric drives; Manitou has equipped one telehandler with a hybrid drive and another with a full-electric drive. DEUTZ says the goal is to enable a significant increase in efficiency to reduce overall running costs, fuel consumption and emissions. 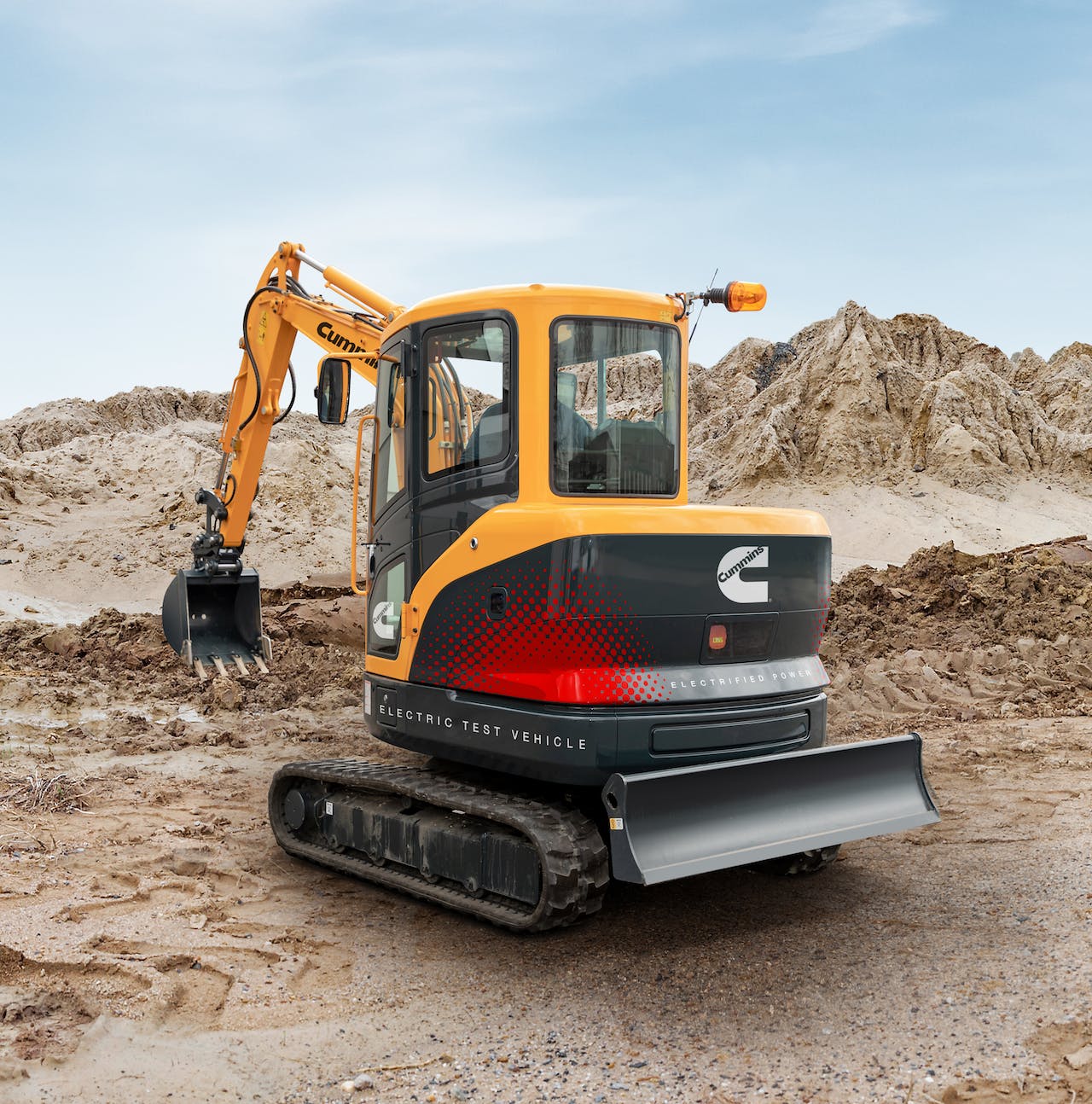 Cummins has partnered with Hyundai Construction Equipment (HCE) to develop an electric powered mini excavator. The machine is powered by Cummins’ BM4.4E flexible battery modules; a total of eight modules are connected together in a series to provide total energy of 35.2 kWh. Operation for a full 8-hour shift is possible with this design. The prototype machine was debuted during bauma 2019.

"As electric vehicles continue to expand their share in the automotive market, we are simultaneously seeing the electrification of commercial power systems being pursued by many as both an environmentally friendly and economically sustainable solution for construction equipment," said D. S. Kim, HCE Senior Executive Vice President & CTO, in a press release announcing the partnership.

"HCE anticipates mini excavators, which operate in urban workplaces close to residential areas, will be a prime candidate to electrify to meet zero-emission and low noise requirements in the near future," he concluded.

Read all the latest news and product announcements on our dedicated Electrification channel.

The on-board chargers convert the alternating current from the charging station into direct current and provide communication between the vehicle and charging station.
BMZ Group
November 1, 2021

Alastair Hayfield, Senior Research Director at Interact Analysis, evaluates how development of batteries and other electronic components for automotive are bringing down their costs for use in off-highway equipment.
October 27, 2021

The value proposition for fuel cell trucks and buses is stronger compared to cars, and IDTechEx does not expect fuel cell cars to be a commercial success comparative to battery-electric ones.
October 25, 2021

The coil driver provides tighter control of the motor and will help to improve performance of next generation electric axles.
Sara Jensen
October 5, 2021