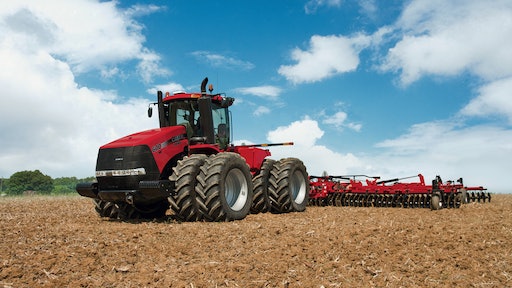 The Steiger 600, Steiger 500, Steiger 450 and Steiger 350 all showed significant fuel efficiency and drawbar horsepower advantages over the competition, according to test lab reports.

Mike Daigh of Taylorville, IL, says he’ll take his Steiger over any other tractor.

“We have a 24-row planter and we haven’t had any issue with the Steiger when it comes to power - not pulling down, not hesitating, even going over hilly ground,” Daigh says. “You can do just about anything with this tractor. I’ll take Steiger over anything.”

Cool-running and quiet, SCR is an engine exhaust after-treatment system. Rather than interfere with engine performance, it actually improves it. Case IH Tier 4B technology will not require regeneration of particulate filters or any Cooled Exhaust Gas Recirculation (CEGR) technology for high horsepower equipment.

For Case IH customers who have purchased Tier 4A equipment, there will be no additional requirements in 2014. Filling the Diesel Exhaust Fluid (DEF) tank is all it takes to reduce fuel consumption and extend service intervals.

Case IH and Fiat Powertrain Technologies (FPT) have been working together on engine innovations that meet Tier 4 regulations for Case IH tractors and combines since 2004. The FPT U.S. Research & Development Center is in Burr Ridge, IL, in the same facility as Case IH Engineering. Together, FPT and Case IH engineers work to design and test high-horsepower engines. Before these engines even enter the market, they go through several thousand hours of rigorous testing. Today, there are more than 10,000 Case IH tractors powered by Case IH SCR technology already performing in farmers’ fields across North America.

In addition to power and fuel efficiency, Steiger tractors feature the most comfortable, productive cab on the market. Already boasting the largest cab in the industry with unprecedented visibility, the new Steiger cab is designed to function as an office in the field with exclusive, four-post cab suspension.

Steiger tractors also feature an exclusive 40-degree, right-hand swivel seat, which provides operators a more ergonomic field of vision to see the front of the tractor while also monitoring the implement behind, minimizing neck strain. In conjunction with Case IH Advanced Farming Systems (AFS) AccuGuide autoguidance, operators in the swivel position can more easily monitor the true productivity zone - the implement behind the tractor.

Also, several cab controls have been relocated to the upper right-hand side of the cab headliner within easy reach, while the most frequently used functions are contained in the new MultiControl Armrest console, bringing all vital tractor operations into one easy-to-operate controller. And, a new AFS Pro 700 color display is integrated into the MultiControl armrest, and moves with the seat.