Fourteen Potain tower cranes and four Grove cranes are assisting with the expansion of the Panama Canal due to the cranes' heavy-lifting capacity and ability to move laterally on jobsite railways. 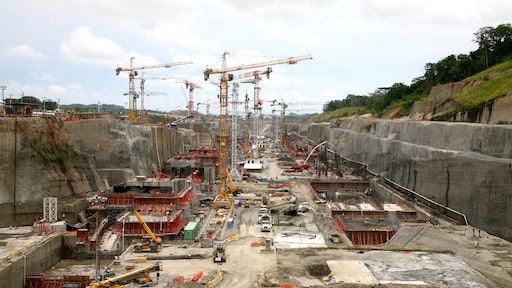 Latin America’s largest civil works project is the $5 billion expansion of thePanama Canal. Considered a “World Wonder,” the canal’s original construction was an epic undertaking – and the expansion to double its size is an international effort. At the center of the action are 14 Potain tower cranes and four Grove cranes.

Hired by the government of Panama to construct the canal, the multinational consortium of contractors GUPC (Grupo Unido Por el Canal) is in charge of the project to expand the 96-year-old canal. The group chose Panama City-based distributor CORPINSA to handle the lifting work with the Potain MC 205 B tower crane and several models from the Grove mobile crane line to get the job done.

“We recommended Potain tower cranes to GUPC and CORPINSA because of their heavy-lifting capacity and their ability to move laterally on jobsite railways,” says Alvaro Alanis, tower crane regional sales manager for Manitowoc in Latin America. “This saves the workers from having to constantly assemble and disassemble the cranes as they move up and down the canal.”

At the jobsite, the 10 ton capacity MC 205 Bs are positioned on both the Atlantic and Pacific sides of the canal, helping to construct a third set of locks. With 50 m of height under hook and 50 m of jib, they are working 24/7, installing rebar, formwork and machinery to assist in concrete pouring. Some are moving across the project on jobsite railways, while others are mounted on fixed bases.

“It took us several months and multiple visits with CORPINSA and GUPC to form this partnership,” Alanis says. “In the end, the GUPC was convinced that Potain was their best solution.”

GUPC purchased all 14 Potain tower cranes directly from Manitowoc. CORPINSA provided the four Grove cranes on a rental contract, helped install the Potain cranes, established their proper configurations during the planning stage and set the foundations for the fixed base units. In addition, it trained workers at the project in the maintenance and operation of the cranes. All of this work was handled in its role as a Manitowoc Crane Care dealer.

The MC 205 B cranes were manufactured at Manitowoc’s Zhangjiagang, China, factory and their cabs are especially comfortable for operators working at the canal. The average temperature on the jobsite hovers around 35 C, so GUPC purchased cabs equipped with air conditioning. The Potain cranes also feature LVF Optima hoist technology, which allows the hoist to adapt its speed to the weight of the load on the hook, improving efficiency.

Complementing the Potain tower cranes, GUPC also rented two Grove all-terrain cranes, a Grove GMK5220 and a GMK5130-2, plus a TMS9000E truck-mounted crane and a RT890E rough-terrain crane from CORPINSA. The Grove cranes helped assemble the tower cranes, and are now handling formwork and performing other lifting requirements.

“Our work with GUPC is ongoing for the duration of the canal’s expansion, which is scheduled for completion in 2014,” says Raymond Mizrachi, general manager of CORPINSA. “Along with support from Manitowoc Crane Care, we are providing crane maintenance and technical support, and we have set up a spare parts yard on the jobsite to ensure the cranes can continue to work 24/7.”

More than 150 million m3 (196 million yd3) of soil and rock will be excavated from the site and 5 million m3 (6.5 million yd3) of concrete will be poured for the new locks. When finished, the canal will have the capacity to accommodate larger ships, including supertankers and the largest modern container ships.

“The biggest challenge of this project is the limited time frame – everything has to be done quickly,” Mizrachi says. “The cranes can never stop working, so a responsive and effective support system must be in place. We have been successful in all phases of our involvement and GUPC reports that it is very pleased with the Potain and Grove cranes.”