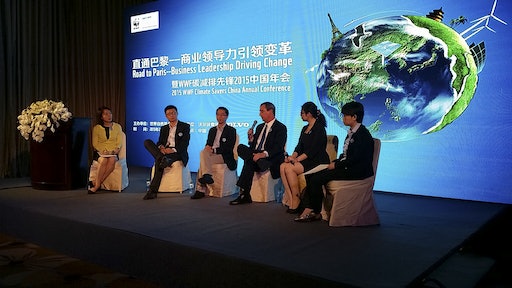 Based on an agreement between the Volvo Group and the WWF Climate Savers Program, Volvo has renewed this partnership and is promoting a series of measures to reach a new target in reducing emissions and to achieve sustainable development through advanced technology.

At one with nature

“The infrastructure industry and the environment are inextricably linked,” says Weissburg. “As the Volvo Group deepens its cooperation with the WWF Climate Savers Program to face the challenges brought by climate change, we are greatly inspired to create a more sustainable environment for future generations.”

Volvo CE has contributed to the Volvo Group’s 2014 carbon-dioxide emissions reduction target and, under a renewed agreement with the WWF, the company will continue to play a crucial role in reducing emissions by at least 40 million tons by 2020. Volvo CE will reduce its impact through production improvements and machine technology. The Volvo Group will also implement a number of activities aimed at accelerating development toward lower and – ultimately – zero carbon emission throughout each of its businesses.

Volvo CE will also continue to drive the Construction Climate Challenge (CCC) initiative, launched in 2014. The CCC contributes to reducing the construction industry’s impact on the climate globally, through sharing best practices, resources and knowledge with academics, industry representatives and politicians – as well as providing funding for new research. The CCC program incorporates the entire construction industry’s operations, from building materials to recycling. So far, four proposals have been evaluated and have already received funding.

In January 2014, Volvo CE was the first in the industry to achieve a ‘carbon neutral’ status for its articulated hauler production facility in Braås, Sweden. The company has also set a target to develop new technologies with considerably better fuel efficiency.