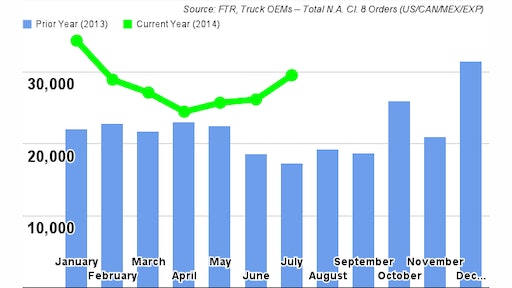 FTR has released preliminary data showing July 2014 North American Class 8 truck net orders at 29,516 units, a tremendous 71% year-over-year increase and the second best July ever. Class 8 orders have now had 18 consecutive months with year-over-year increases. OEMs continue to increase build rates in response to solid demand for Class 8 trucks and this level of orders will challenge capacity constraints by year end. Class 8 orders for the latest six-month period through July annualize to 325,000 units.

Don Ake, FTR Vice President of Commercial Vehicles, comments, “July is typically the weakest month of the year for orders, but the market is actually gaining strength in the summer. This is the third straight month of order increases. Orders for the last 12 months have been 312,000 units, so production should catch up at some point.”
Final data for July will be available from FTR later in the month as part of its North American Commercial Truck & Trailer Outlook service.

Drive System Design continues to expand its testing capabilities for electric vehicles and components as the need for testing and development increases.
Sara Jensen
June 16, 2021

World of Concrete is the first major construction industry show to hold an in-person event in 2021.
Sara Jensen
June 10, 2021

The Honda eGX is a battery-powered motor which closely matches the performance of Honda GX engines used in the construction equipment industry.
Honda Engines
June 8, 2021

Hyundai has made upgrades to the design and performance of its XCIENT Fuel Cell heavy truck, Truck-Lite and Brokk announce new headquarters locations, and more news you may have missed.
Sara Jensen
May 26, 2021

Cat Rolls out Next Gen 980 and 982 Medium Wheel Loaders

New technologies such as Autodig with Auto Set Tires and available CVT transmission allow these 10- to 12-ton wheel loaders be up to 10% more productive and increase fuel efficiency up to 35%.
Curt Bennink
May 24, 2021

Automated systems and machines are enabling opportunities to create a safer and more efficient construction industry.
Kim Hegeman
May 18, 2021
Follow Us