The Cabmate air suspension for Class 7 and 8 trucks is used by numerous North American OEMs. 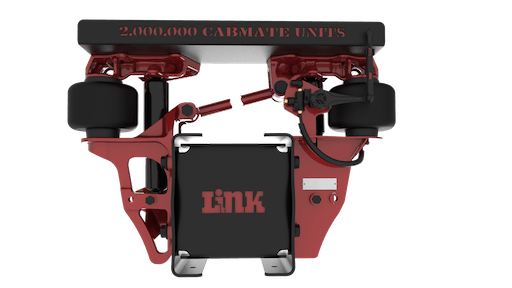 Link Manufacturing, Ltd., a leader in specialty engineered suspensions, announced a major milestone in the company’s history: the production of its two millionth Cabmate premium cab suspension. To commemorate this significant achievement, the company has planned events throughout the year to recognize customers and thank employees for their support and dedication over the years.

Cabmate was the first cab air suspension for Class 7 and 8 trucks and is used by more North American OEMs than any other system. As a testament to Cabmate’s increasing prominence in the industry as well as Link’s expanding OEM relationships and manufacturing expertise, Link reached its one millionth Cabmate 28 years after its introduction, and reached the two millionth milestone just 11 years later.

Cabmate was initially developed in 1980 when truck driver Bill Nibbelink was searching for a more comfortable ride. Nibbelink built the first cab air ride suspension for his heavy-duty truck, and then started making additional units in his garage. The result of his efforts was Cabmate and its popularity quickly became evident. Link Manufacturing was soon on its way with this first product and opened its first Cabmate factory in 1984.

From the outset, Link was focused on working with OEMs to collaboratively engineer systems for their specific makes and models. By 1985 Link introduced its first factory-install which was integrated into the truck OEM’s manufacturing system. Throughout the decade Link developed partnerships with leading OEMs to offer Cabmate as an option on their vehicles.

During the 1990s the focus turned to reducing weight to help vehicles achieve greater fuel efficiency. Over the ensuing decade Link introduced a series of design changes to further enhance the durability of the Cabmate system. In total, more than 200 Cabmate models have been designed for vehicles that range from day cabs, extended length sleepers, terminal tractors, agriculture sprayers, fire trucks and defense vehicles. Link now boasts state-of-the-art manufacturing facilities in Iowa where the majority of Link’s cab, chassis, auxiliary and trailer suspensions, and ramp products are built. Additionally, Link Suspensions of Canada, based in Nisku, Alberta, manufactures heavy vocational suspensions for severe-duty vehicles.

“Cabmate is a perfect example of American ingenuity,” says Jim Huls, President of Link Manufacturing. “One great idea resulted in an excellent company serving the needs of an entire industry to enhance performance and comfort. The incredible success of Cabmate reflects our collaborative relationships and tremendous trust OEMs put in Link, along with the dedication from our talented and innovative employees.”

Cabmate Continues to Drive the Future

Building upon its collaborative engineering and innovation focus, Link is currently developing the Cabmate Road Optimized Intelligence (ROI) system, an intelligent cab suspension that maximizes ride comfort for the driver and offers greater protection of electronics inside the cab. Using an electronic control unit, Cabmate ROI reads information hundreds of times per second from accelerometers and position sensors to instantly cushion the blow as the vehicle goes over rough terrain by determining the optimum settings for the shock absorbers.

To recognize the significant achievement of the two millionth Cabmate, Link is hosting an employee celebration on May 23, 2019, and will present OEMs with commemorative plaques throughout the year. “We’re a great American success story because we are driven to outperform our customers’ expectations at every turn. This spirit is embraced by every employee on our team today and all of those who have played a role in Cabmate over the years,” concludes Huls.

Suspension offerings include the introduction of the HAULMAAX EX and the expansion of Hendrickson's ULTIMAAX and PRIMAAX EX products.
Hendrickson International
October 8, 2020

At ICUEE 2019, Meritor debuted a lighter variant of its independent front suspension, as well as an enhanced transfer case, both of which are purpose-built for utility and construction fleets.
Meritor, Inc.
October 1, 2019

The 105K Triton Tri-Drive Air Suspension is designed for use in multi-axle configurations for heavy-haul and off-highway applications.
Link Manufacturing Ltd.
May 15, 2019

The truck and trailer product lines have expanded availability for galvanized components, and the trailer drum brake models have a new crosschannel and hanger design.
Ridewell Suspensions
October 15, 2018

The Level Load from Standen’s offers a range of air management products, designed and engineered in Canada.
Standen's, an IMT Company
December 1, 2017

AxleTech worked with Altec Industries to develop the system which features an Independent Front Suspension drive axle module for improved safety and vehicle control both on- and off-road.
AxleTech
October 2, 2017

Meritor announced at NACV 2017 it will develop a platform of electric drive axles and suspensions for use in both on- and off-highway applications.
Meritor, Inc.
September 26, 2017
Follow Us