Use of smart electromechanical actuators with onboard electronics delivered the reliability, force capability and control features necessary for a new combine harvester design. 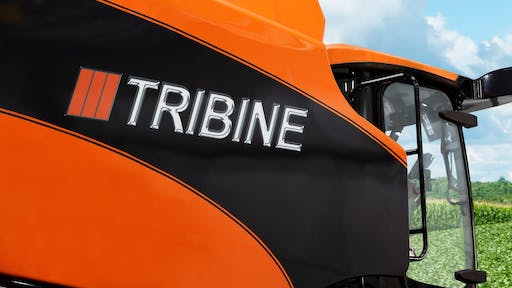 While agricultural harvesters have become increasingly capable of reaping more wheat, corn and other field crops, their contribution to farm profitability has been constrained by limitations on their ability to get harvested product to market efficiently. Hoping to overcome this challenge is Kansas-based Tribine Harvester, a recent entrant in the grain harvester market, who has begun shipping an innovative machine it believes to be the most significant advancement in combine technology since WWII. Helping set the Tribine design apart from conventional harvesters is its unique application of smart linear actuators.

In the field, traditional combines unload product from onboard storage bins into grain carts, which tractors pull alongside them. When the grain cart is full, usually at approximately 800 bushels, the tractor hauls it off the field to a semi-truck, which will eventually deliver the grain to market. However, because combine storage bins typically hold no more than 350 bushels, filling the grain cart requires pulling it for extended distances beside the combine. This, in turn, requires the tractor to return quickly to the combine once it has unloaded or the deployment of multiple tractor-grain cart combinations. This continuous traffic across the field contributes to added fuel and labor costs, and soil compaction. Additional revenue loss will occur from cost of tillage or up to 10% reduction of subsequent crop yield from compaction. 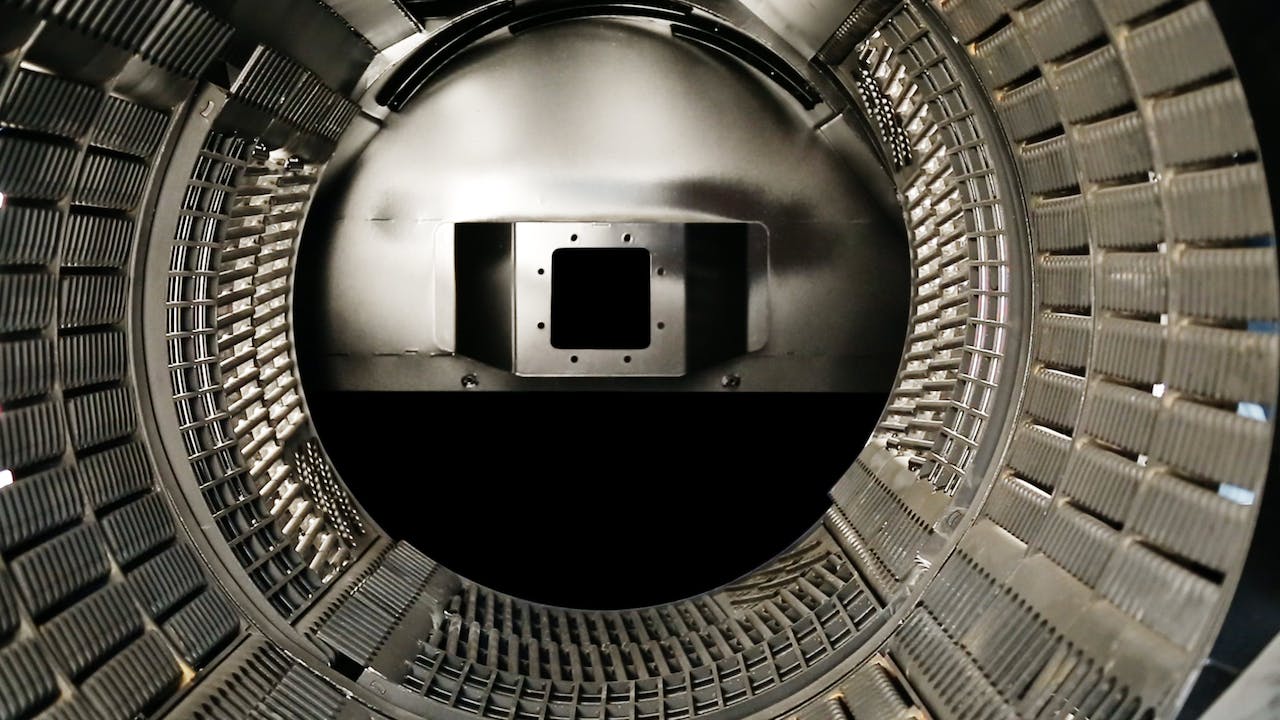 The Tribine cuts crop through the feeder house to a rotating cylinder or rotor; much of the grain separation is performed by three curved “concave” segments that encircle the lower 270 degrees of the rotor’s circumference.Thomson Industries Inc.

The Tribine cuts crop through the feeder house to a rotating cylinder or rotor, which, at 38 in. (96.5 cm) in diameter, is larger than most conventional combines. Performing much of the work in separating the grain from the material other than grain (MOG) are three curved “concave” segments that encircle the lower 270 degrees of the rotor’s circumference.

Adjusting the concaves for various types of product or conditions requires modifying the speed of the rotor and gap between the rotor and concaves according to the condition of the crop at harvest time.

“We needed to adjust from approximately zero clearance, where crop is being forced between rasp bars on the rotors, up to a 2-in. (5.1 cm) gap, where the crop is threshed against itself to separate from the MOG,” says Tribine Harvester Control Systems Engineer Russell Secrest. To accomplish this task, the Tribine Harvester team determined the need for an actuator assembly with advanced measurement and lock-in-place capabilities.

“We had to be able to measure the exact distance between the concave and the rotor. We also needed a way of making sure that the concaves locked in place, so they don’t change during harvesting unless commanded by the operator. And because of the large size of our rotor cage, we needed actuators with enough force to enable fine adjustments to the concave positions to maximize threshing performance,” Secrest continues.

In selecting actuators for both the concaves and the grain bin, the Tribine Harvester team quickly ruled out traditional actuator solutions. They scratched hydraulic actuators due to the complexity required to achieve accurate and reliable position feedback. Not only are these external components complex and often unreliable, they also consume too much space. Hydraulic cylinders are also difficult to lock in place because of pressure loss due to leakage.

Tribine Harvester designers also ruled out conventional electromechanical actuators, which would yield an analog signal but also require additional wiring of external devices. Bi-directional control, for example, would need H-bridge circuits and additional inputs to decode that analog signal for the operator. The signals also require a high-voltage output, adding cost both at the production and operational levels.

Fortuitously, in 2015, in the midst of the Tribine design cycle, Thomson Industries Inc. introduced a heavy-duty, smart electromechanical actuator with onboard electronics that delivered the reliability, force capability and control features the team needed.

Tribine Harvester designers deployed three Thomson Electrak HD actuators, which provide maximum control over the entire length of travel as they open and close the concaves around the rotor.

“The Thomson actuators allow for scaling that enables the operator to know the current position and because of inherent braking and force capability, they can adjust the concaves easily and lock in place very well,” says Secrest, attributing much of this benefit to the onboard electronics that enable him to use a controller to program multiple ways of driving the actuators.

The Thomson actuators use only four wires: two to provide low-power connections to the communications bus and two to connect to the power supply. This simple architecture enables the Tribine Harvester design team to communicate across a J1939 CANbus communication network, providing a powerful and cost-efficient circuit that allows the team to program control in a way that has never been possible with a basic electromechanical actuator or hydraulic system.

“CAN communication has allowed for quick and easy implementation,” says Secrest. “A nice thing about the HD actuators is that once you supply power to them, they exist on the communications side. You can set and forget.” 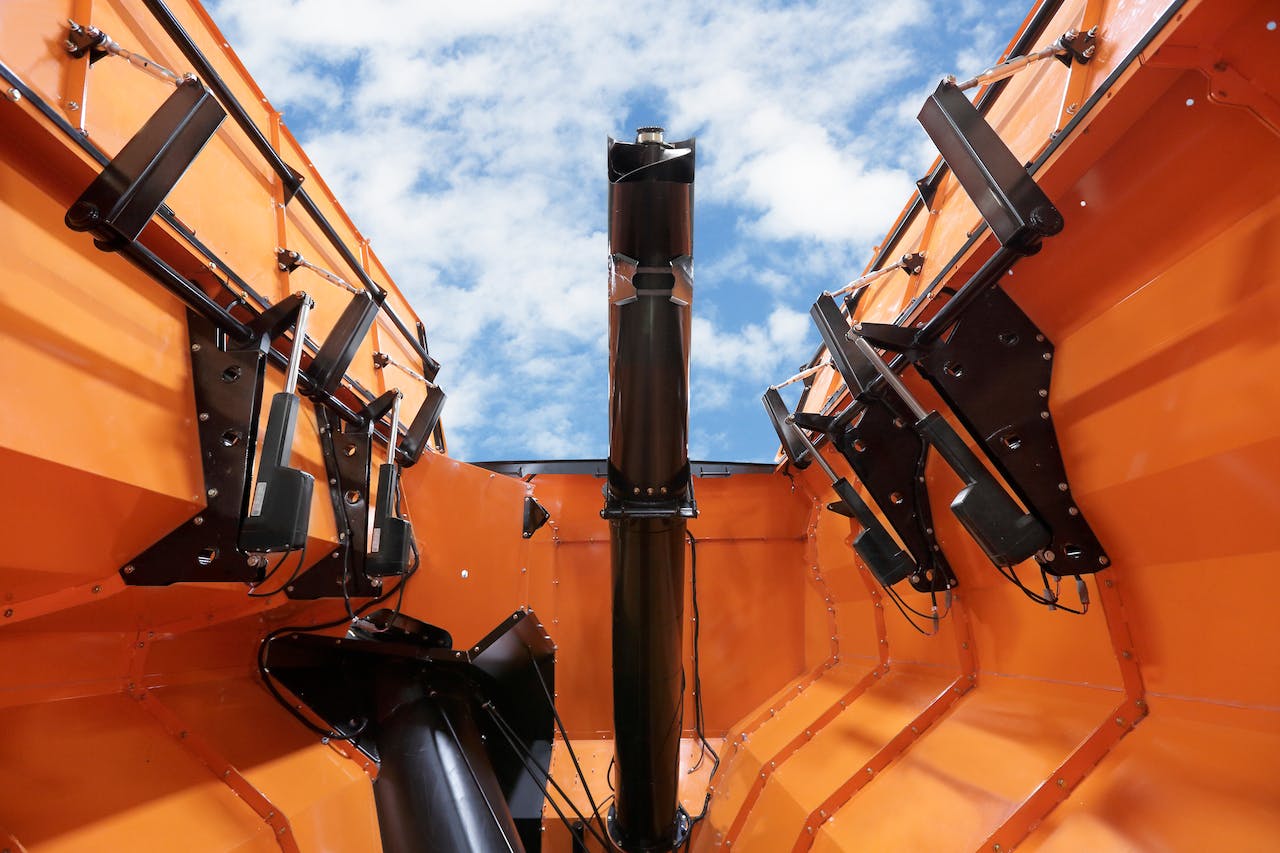 Four HD actuators on the sides of the bin and one in the augur, each of which is programmed to deliver feedback on position via the J1939 CANbus network.Thomson Industries Inc.

The CANbus networkability and built-in positional awareness of each actuator helped Secrest overcome some unique mechanical and linkage issues in building the actuator assembly. To close the gap between the rotor and concaves, two actuators have to be extending while the third is retracting. But when the gap needs to open, two actuators would be retracting, while the other is extending. Synchronizing this operation would be all but impossible without continuous feedback and movement commands, which are easily accomplished across the network bus.

“We don’t want any actuators to get more than 10-12 mm (0.4-0.5 in.) out of sync with each other,” says Secrest, who wrote the code of this precision synchronization. “Each actuator provides feedback of its position or faults over the communication bus in real time, allowing a controller to track position and status and, therefore, synchronizing position within 5-10 mm (0.2-0.4 in.). They follow each other whether they are going in or out, and we never get into a position where they are grossly out of sync.”

Once the grain is separated, a folding bin-fill auger transfers the cleaned grain to a 1,000-bushel grain bin. This size is made possible with extension doors on the top of the bin, which holds significantly more than conventional 350-bushel bins. The folding auger and extension doors are important for keeping the loading and transporting size to a smaller profile and must be synchronized to avoid physical damage to the bin extension doors. 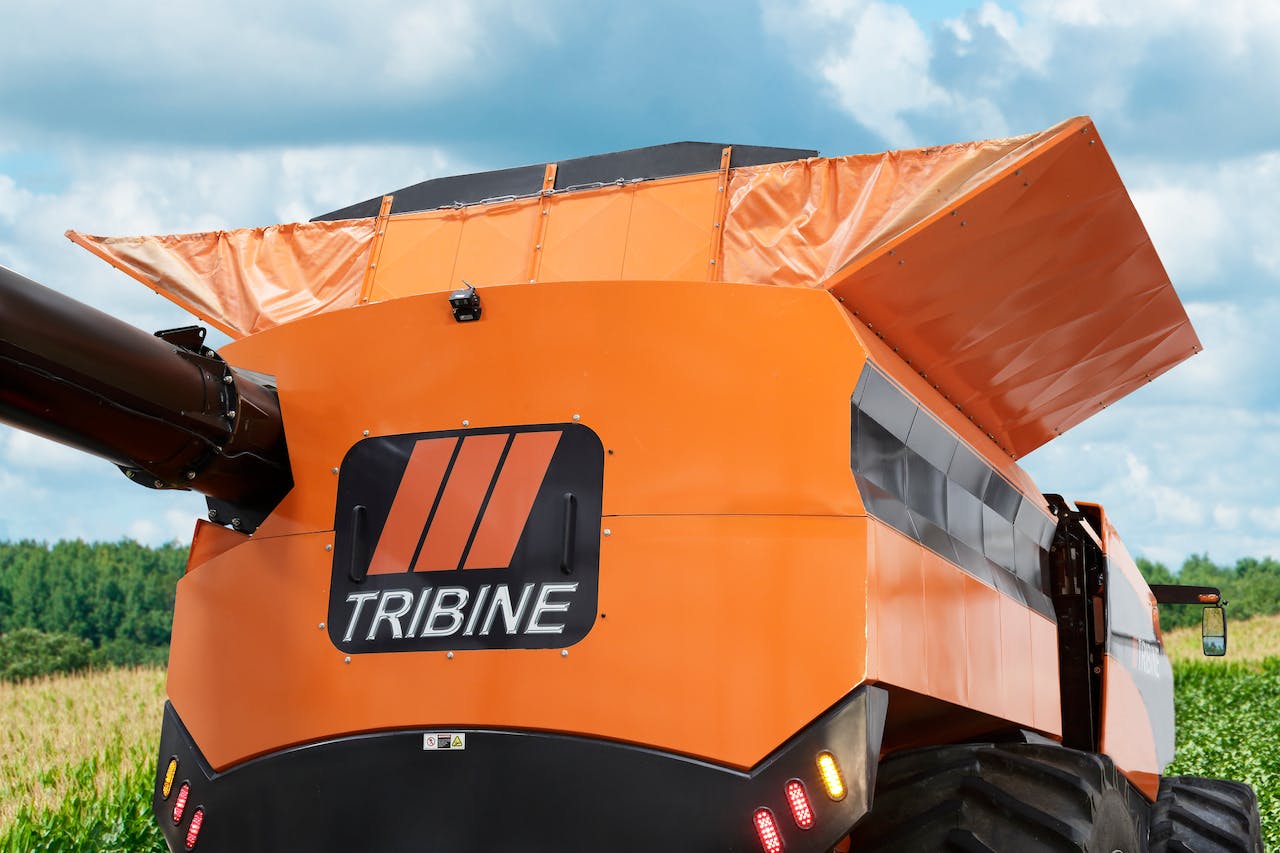 To synchronize grain bin door operation, Tribine Harvester deployed four HD actuators on the sides of the bin and one in the augur, each of which is programmed to deliver feedback on the position of the grain door across the CAN network and be reset as needed. The feedback provides operators the information they might require to resynchronize the augur and grain door operations to avoid blockage or increase output.

Success in the field

Tribine Harvester is already shipping vehicles with this advanced design, and the Thomson Electrak HD actuator is proving to have been the right choice. The ability to program the unique scheme of moving two actuators in one direction while another is actuating in the opposite direction has proven successful and could not have been implemented easily without the CANbus communications network. The HD actuators also have the force necessary to keep the actuators locked into place, while the network and onboard intelligence provide the operator with reliable information on the position of each actuator and the ability to control that position as needed.

Likewise, actuators on the grain bin have contributed to the proven ability of the Tribine to meet its goal of unloading 1,000 bushels in only 2 minutes by synchronizing the grain bin door and discharge chute. Such capacity also means that the Tribine can load directly to the semi-truck, eliminating the need for tractor-pulled grain carts.

And, because all of the communications, feedback and programmability functionality is contained within the actuator housing itself, Tribine Harvester designers and their customers are both benefitting from an installation footprint far more compact than any alternative actuation technology would have allowed.

The latest YouTube video shows how the Tribine Harvester engineers used Thomson actuators for their applications:

Jeremy Harsin of Cummins explains how a variety of power system advancements are taking place to meet the varied needs of the off-highway equipment industry.
Sara Jensen
December 22, 2021
Latest
Actuators

The Electrak MD is a more compact electromechanical actuator offering up to 2 kilonewtons of force.
Thomson Industries Inc.
July 15, 2020

View
Are your machines prepared for uneven, awkward or large loads?

The Southco AC-EM 05 Electronic Actuator can be used to actuate a mechanical latch to remotely open or unlock a door or panel when connected to an electronic access control device.
Southco, Inc.
April 9, 2018