This CANopen option enables greater connectivity, maintainability and flexibility for designers integrating the actuator into their systems. 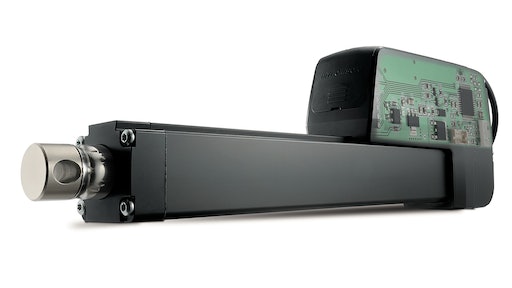 Thomson Industries, Inc. has announced the availability of the CANopen industrial networking protocol as an option for its line of heavy-duty Electrak HD electric actuators. Designers of linear motion systems requiring up to 16 kN load handling can now enjoy the cost savings and flexibility of this CANbus standard.

“Many of our customers are seeking to reduce costs and gain flexibility by integrating their motion systems into higher-level, open automation strategies and have asked us to support CANopen. We are pleased to announce that we are now offering both CANopen and SAE J1939 capabilities for our popular Electrak HD actuators,” says Anders Karlsson, Product Line Specialist – Linear Actuators at Thomson.

CANopen is an open industrial integration protocol built on the Controller Automation Network (CAN). Originally developed for industrial systems,it is increasingly becoming the protocol of choice for factory automation systems, most notably AGVs and PLC-controlled material handling systems.

CANopen offers all of the functionality of SAE J1939, another protocol built on the CAN network bus, but uses an independent standard platform that enables plug and play integration with other standard devices. This makes it possible to integrate motion into other, higher-level automation schemes.

Taking full advantage of the CANopen data handling capabilities are the onboard electronics embedded in the Thomson Electrak HD actuator, which eliminate the need for standalone controls. This smart electric actuator offers an intelligent, powerful and compact alternative to hydraulic systems. In addition to load handling up to 16 kN, the Electrak HD provides up to 1 meter of stroke, up to 75 mm/s of speed and high environmental resistance, including IP69K.

ThomsonElectrak HD linear actuators with CANopen are available immediately and are compliant with specification 301 published by the CAN in Automation (CiA) standards body. Additional Thomson electric actuator models are being considered for future implementation.

The CompAct technology has a single coil design, and the entire unit is plated for up to 1,000 hours corrosion resistance per ASTM B117.
G.W. Lisk Company, Inc.
August 29, 2021

View
The decades-old KISS design principle still rings true today – simplicity leads to better understanding and easier use of your application. This is especially true when it comes to electric linear actuators.
Thomson Industries Inc.

The Electrak MD is a more compact electromechanical actuator offering up to 2 kilonewtons of force.
Thomson Industries Inc.
July 15, 2020

Use of smart electromechanical actuators with onboard electronics delivered the reliability, force capability and control features necessary for a new combine harvester design.
April 19, 2018
Follow Us