Bendix Wingman Fusion is a new safety system which integrates various safety technologies including radar, camera and braking with new features such as stationary vehicle braking and overspeed alert to increase operational safety for fleets. 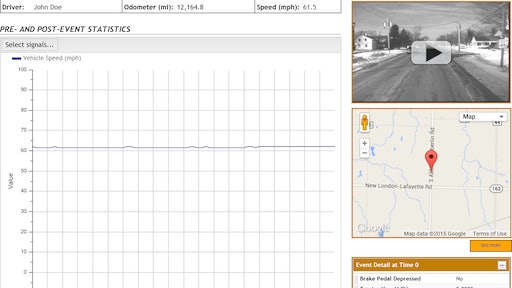 Wingman Fusion integrates with SafetyDirect by capturing video of Level Two overspeed events (+10 mph), as triggered by Fusion’s Overspeed Alert & Action feature. This graph and video capture shows the Wingman Fusion-equipped vehicle was travelling at 61.5 mph when it passed a 45 mph speed limit sign – fast enough to trigger a Level Two overspeed event that was captured on SafetyDirect for review and analysis.

“Wingman Fusion represents a pioneering technological stride that is far more than simply the collection of its parts,” says Scott Burkhart, Bendix Vice President of Sales, Marketing and Business Development. “It offers an all-inclusive, better-performing safety option for fleets, which is supported by a single, leading-edge manufacturer with an 85-year history of making roads safer.”

Wingman Fusion’s stationary vehicle braking capability is made possible by the use of combining both radar and camera data to confirm a vehicle ahead, and is activated at speeds above 15 mph. When the system definitively recognizes a large, stationary, metallic, in-lane object as a vehicle, it notifies the driver up to 3.5 seconds before a potential impact. If the driver takes no action to avoid or mitigate this potentially severe impact, the system can automatically engage the brakes to assist in lessening the severity of, or possibly avoiding, a potential collision altogether. If the system’s data do not definitively recognize the stationary object as a vehicle, it will alert the driver up to 3 seconds ahead of a potential impact, with no automatic braking.

“The usefulness of stationary vehicle braking is best illustrated by imagining a stalled vehicle or a line of stopped traffic, which may not be immediately recognized by even a skilled, veteran driver,” says TJ Thomas, Bendix Director of Marketing and Customer Solutions, Controls group. “Without Wingman Fusion’s automatic alert and braking, it may be too late to avert an impact.”

Wingman Fusion’s overspeed alert and action can be activated at 37 mph or above, and uses the system’s camera to read roadside speed limit signs, working in tandem with Bendix ESP to alert the driver when the vehicle is travelling a specified amount over the posted limit. The system provides two customizable levels of intervention: Level one, initially set for 5 to 9 mph over the limit, is an audible warning; level two, if the vehicle is travelling 10 mph or more over the limit, is an audible alert accompanied by a one-second engine de-throttle. Additionally, for level two, a severe-event notification is sent to the fleet’s back office through SafetyDirect by Bendix CVS, where it can be used for training and analysis. Fleets can use Bendix ACom diagnostic software to customize the level one and level two speed thresholds.

By continuously gathering, sharing, and confirming information, Wingman Fusion uses its radar and camera together to identify potentially threatening objects, both stationary and moving. This significantly improves upon their individual performance, and substantially reduces false alerts or activations as they work together.

The radar unit excels at detecting the distance, speed and angle of objects in an area in front of the vehicle, covering roughly a 22 degree arc extending approximately 500 ft. The radar is good at penetrating visually difficult conditions such as snow, rain, fog and smoke. By comparison, the camera covers a slightly shorter but much wider arc – about 42 degrees by 300 ft. – and detects objects visually. The camera is powered by the Mobileye System-on-Chip EyeQ processor with advanced object detection algorithms adapted for commercial vehicle applications. Together, these components complement one another by determining the size, lane position and similarly critical characteristics of an object. The combination of these different technological inputs enables much of the advanced functionality of Wingman Fusion, resulting in better collision mitigation, alert prioritization and integration of previously separate technologies.

When triggered by a slower-moving vehicle ahead, Wingman Fusion’s combined video, radar and brake data generate a faster response to the situation than a system relying on non-integrated input could typically achieve. During a possible collision situation, this enables Fusion to potentially reduce the vehicle’s speed up to twice as much as earlier systems.

With its abundance of input data and powerful computing already minimizing false alerts, Wingman Fusion goes a step further and adds an alert prioritization feature. If multiple alerts are needed simultaneously – lane departure warning and impact alerts, for example – the system will arrange them in order of importance and deliver only the most crucial alert to the driver, minimizing the potential for distraction.

Following-distance alerts and lane departure warning, previously available as features in separate Bendix safety technologies, are both integrated into Wingman Fusion as well to alert drivers to potentially hazardous situations. When driving too close to a forward vehicle, the system will sound an alert that silences when the gap with the forward vehicle grows. This feature is customizable to meet different fleet operational needs. Lane departure warning, powered by the camera, sounds an alert if the vehicle is traveling at or above 37 mph and departs its lane without activation of a turn signal.

The Road to Wingman Fusion

Bendix ESP, introduced in 2005, was the first full-stability solution widely available for the North American commercial vehicle market, addressing both roll and directional stability through additional sensors and throttle and braking interventions. Its technology serves as the foundation for Bendix’s ongoing advancement of active safety systems.

Wingman systems launched in 2009 with Wingman ACB – Active Cruise with Braking, and evolved with the 2011 launch of Wingman Advanced, which introduced collision mitigation technology. Wingman Fusion marks another leap forward through its integration of next-generation radar, camera, and brake technology working together like never before.

This ongoing progress and development of Wingman Fusion as a natural evolution of existing Bendix driver assistance systems means the system has been designed to provide its own backup plans: If the camera becomes inoperable, Fusion’s radar will maintain Wingman Advanced functionality, including collision mitigation.

Wingman Fusion is available to all major North American manufacturers of Class 8 trucks for integration into their vehicle platforms.

“The need for comprehensive, proactive driver training and safe, alert drivers practicing safe driving habits cannot be replaced by any technology, no matter how advanced,” Thomas says. “But during Wingman Fusion’s extensive testing and demonstration, fleets and drivers regularly provided incredibly positive feedback on the system’s potential for helping to improve fleet operations, driver education, and – what matters to us all the most – highway safety.”

Thomas notes that Bendix safety technologies complement safe driving practices and are not intended to enable or encourage aggressive driving. Responsibility for the safe operation of the vehicle remains with the driver at all times.

Wingman Fusion is the latest addition to Bendix’s ever-growing portfolio of technology developments that delivers on safety, plus four other areas critical to fleets’ success: stopping power, actionable information, reliability and fuel economy.