A recent permanent exemption to FMCSA rules allows devices used for vehicle safety to be placed on the interior of commercial vehicle windshields. 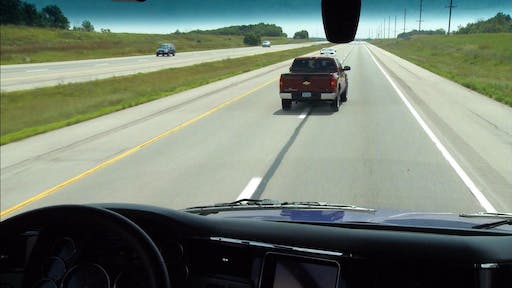 The video camera component of the Bendix Wingman Fusion collision mitigation technology and AutoVue Lane Departure Warning (LDW) System from Bendix CVS will remain compliant with Federal Motor Carrier Safety Administration (FMCSA) rules, thanks to an exemption that was recently made permanent. Effective October 24, 2016, the rule change allows certain devices that utilize “vehicle safety technology” to be placed on the interior of commercial vehicle windshields within the area that is swept by the windshield wipers.

“This ruling marks an important step in the continuation of the commercial vehicle industry’s highway safety efforts by ensuring that the development of these technologies can continue without fleets and drivers having to worry about violating windshield clearance rules,” says Fred Andersky, Bendix Director of Government and Industry Affairs. “Each day, more fleets, drivers, and truck manufacturers are realizing the benefits of active and supportive safety technologies that help make a positive impact on roadway safety. This decision paves the way for continued seamless integration of even more autonomous technologies into an overall safety plan.”

Under the FMCSA prohibitions on obstructions to a driver’s field of view, devices such as antennas or transponders that are mounted at the top of a windshield must be located outside the area swept by the windshield wipers. The regulatory change affecting the camera component of Wingman Fusion and AutoVue states that motor carriers using approved safety technologies such as lane departure warning systems and collision mitigation systems can mount devices within that area, though not more than 4 in below its upper edge, or 7 in. above its lower edge. The devices must still remain outside the driver’s sight lines to the road, highway signs, and signals.

Wingman Fusion and AutoVue are effective in most weather conditions where lane markings are visible, which means the systems’ forward-facing cameras need to be mounted within the swept area of the windshield wiper.

In its final rule, the FMCSA stated that such devices and technologies as collision mitigation and lane departure warning “have been proven to improve safety and vehicle operations.” The FMCSA also noted that since granting the first temporary exemption to this particular windshield obstruction rule in 2009, it has not learned of any crashes attributed to the location of the devices marginally within the area swept by the windshield wipers.

“The rule change makes it easier for fleets, drivers, and owner-operators on the road to avoid potential violations during vehicle inspections,” Andersky notes. “It seems even with the exemption, a fleet or driver every year would get cited for a violation. This makes it clear and concise for law enforcement – safety technologies can be reasonably located in the windshield sweep area.”

“What’s important to keep in mind,” Andersky cautions, “is that the ruling expects a level of common sense be applied – too many devices, or the wrong devices in the sweep area, can still warrant a possible citation.”

What’s Permissible and Why?

FMCSA defines devices that can be included in the permanent exemption as “vehicle safety technologies in 393.5 of the FMCSRs (Federal Motor Carrier Safety Regulations) to include all technologies that had been previously granted an exemption.”

AutoVue  is a vision-based system linking a camera with a 60-degree field of view to an on-board computer that uses image recognition software to track visible lane markings. This market-leading LDW system continually monitors a vehicle’s position and detects when the vehicle begins to drift toward an unintended lane change. Upon detection, AutoVue emits a distinctive “rumble strip” or other audible warning to alert the driver to make a correction.

In June 2016, the National Highway Traffic Safety Administration (NHTSA) released a Field Study of Heavy-Vehicle Crash Avoidance Systems, based on data from more than 110,000 hours and 3 million miles driven in trucks equipped with collision mitigation technology. The report found no rear-end collisions involving the vehicles in the study, and said the technology shows potential for significant safety benefits.

In an October 2013 report evaluating the effectiveness of on-board safety systems, the FMCSA found that trucks without LDW systems had an LDW-related crash rate per Million Vehicle Miles Traveled (MVMT) nearly twice as high as trucks equipped with such a system. This means that use of an LDW system translates to a 47.8% crash rate reduction per MVMT in LDW-related crashes. When the FMCSA renewed its initial exemption in 2013, it said the decision would maintain a level of safety that is equivalent to, or greater than, the level of safety achieved without the exemption.