Volvo has unveiled a load carrier for use in mining and quarrying made from SSAB's fossil-free steel, and has plans to produce more such vehicles in 2022. 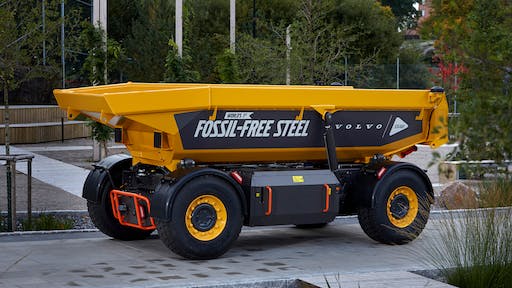 Volvo Group has revealed what is likely the world's first vehicle made from fossil-free steel produced by SSAB. The machine—a load carrier for use in mining and quarrying—was unveiled during a green steel collaboration event held October 13. The event was held in Gothenburg and hosted by Martin Lundstedt, President and CEO, Volvo Group.

More vehicles will follow in 2022 in what will be a series of concept vehicles and components using fossil-free steel from SSAB.

Volvo broadcast the premiere of the vehicle online, and shared details of another sustainable steel collaboration. Several industry and local leaders were in attendance at the event, including EU commissioner for internal market, Thierry Breton, and the Swedish minister of enterprise and innovation, Ibrahim Baylan, as well as Martin Lindqvist, CEO of SSAB, and other speakers.

“This initiative with SSAB sets the benchmark for a fossil-free future. Just as the nations of the world come together at COP26 to address climate change, so too must organizations and industries work in collaboration to develop innovative new solutions for a greenhouse gas emission free future. Volvo Group is committed to pioneering partnerships such as this with SSAB to develop attractive, safe and efficient new vehicles and machines that pave the way for a more sustainable transport and infrastructure system adopted for the future,” said Lundstedt, in Volvo's press release announcing the unveiling of the machine.

Manufacturing equipment made of fossil-free steel is an important part of Volvo Group's goal to be climate neutral and achieve net zero value chain greenhouse gas (GHG) emissions by 2040. Per Volvo's press release, a move toward green steel is an important step for the group, as well as for the transport and infrastructure industries as a whole, particularly considering that around 70% of a truck’s weight comes from steel and cast iron, with the figure for Volvo machines even higher. This first concept machine, produced at Volvo CE’s facility in Braås, is just the start, with smaller-scale series production planned by 2022, and mass production set to follow.

SSAB first set out to produce fossil-free steel in 2017 through the formation of its HYBRIT joint venture. Over the past several years, HYBRIT has achieved several milestones along its path reducing the output of carbon during the steel production process. In August 2020, the joint venture announced its production facility was up and running, and in August of 2021 it announced its fossil-free steel was ready for delivery.

Volvo Group and SSAB first announced their collaboration to use the steel in Volvo vehicles and equipment in April 2021.

“Having the world´s first actual vehicle made using SSAB's fossil-free steel is a true milestone. Our collaboration with Volvo Group shows that green transition is possible and brings results,” said Martin Lindqvist, President and CEO at SSAB. “Together, we will continue reducing climate impact all the way to the end customer while ensuring that our customers get high-quality steel. We look forward to continuing to work with Volvo Group in research and development to produce more fossil-free steel products.”

Per SSAB's press release announcing the unveiling of Volvo's fossil-free steel machine, the company plans to supply the market with fossil-free steel at a commercial scale in 2026 after a conversion of its Oxelösund blast furnaces into an electric arc furnace and by using HYBRIT technology, which replaces coking coal traditionally needed for iron ore-based steelmaking, with fossil-free electricity and hydrogen. This process is a deciding move toward virtually eliminating carbon dioxide-emissions in steel production.