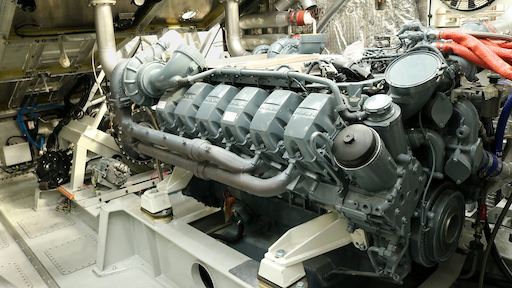 The D2862 in the engine room of the hovercraft.
Griffon Hoverwork

In April 2016, the British manufacturer Griffon Hoverwork, a leading manufacturer of hovercraft, finalized two new models for the ferry company Hovertravel. The amphibious crafts "Solent Flyer" and "Island Flyer" – both 12000TD models – began a phased introduction to replaced the 30-year-old AP-188 models at the beginning of summer 2016. The rather outdated models were equipped with four engines, as is customary in conventional hovercraft. Thanks to the innovative new drive system, the new 12000TD model hovercraft only require two power units, thereby allowing potential fuel savings of one third. With the powerful and efficient double-engine system comprising two MAN D2862 LE124, the hovercraft can nevertheless draw upon 1,586 kW (2,158 hp), enabling a top speed of 50 knots (92.6 km/h).

However, the powerful twelve-cylinders at the heart of the hovercraft don’t just stand out from the rest due to their high performance. The drive has been configured and perfected specifically for this very use, which is why the development departments of the Marine and Off-Road market segments worked together on the project in the MAN International Engine Competence Centre in Nuremberg. They developed modifications to the engine in order to be able to meet the challenges of a hovercraft. "With the D2862 LE124 we have deliberately chosen engines used for agricultural engineering because they are lighter and are radiator cooled. This is important because with a hovercraft you do not come into direct contact with the water therefore it is not possible to use the typical water cooling system used for marine engines. In addition to various minor modifications, the special feature of the power units – which are actually used on the land – is that they comply with the MARPOL regulations for the shipping industry," said Andrew Mellard, General Manager of MAN Engines & Components in the UK. The hovercraft engines need to meet this standard because they are used at sea in the UK as passenger ferries. The ferry company Hovertravel Ltd. is the first to successfully use hovercraft of this type in a commercial context. The models, which are to be replaced in the future, cross the Solent in the south-west of the UK over 70 times a day and carry both commuters and tourists across the strait.

The new amphibious vehicles were designed and produced for the ferry service by the sister company Griffon Hoverwork. Thanks to the new drive design for the Solent Flyer and the Island Flyer, there is now a considerable potential for fuel savings to be made. The 12000TD models began a phased introduction in the summer of 2016 and have been transporting passengers more comfortably and more importantly, much more efficiently from Portsmouth to the Isle of Wight. In one trip across the strait, the hovercraft can carry up to 88 people, including the crew, meaning that the hovercraft can cater for three times the capacity of an average city bus.

With a 793 kW (1,079 hp) output at 1,800 rpm – which each engine generates from a 24.24 L cylinder capacity – these top-of-the-class vehicles have enough power available to accelerate the hovercraft up to speeds of 50 knots (92.6 km/h). This means that the water taxis only take ten minutes to complete the crossing. Unlike previous models, the Solent Flyer and Island Flyer are equipped with only two engines, while earlier versions required a total of four; of these, two power units were used for lift and two were used for horizontal acceleration. In the new models, these two functions have been combined, so that the two twelve-cylinder engines provide both lift and propulsion. Thanks to this innovative drive, 12000TD hovercraft have the potential to consume one-third less fuel than comparable vehicles. Due to their modernised design, however, the new systems not only save money, but also improve comfort levels on board the hovercraft: "The engines are very fuel-efficient and quiet and this is very important in ensuring our passengers have a pleasant experience," said Mark Downer, Chief Engineer at Griffon Hoverwork. "We have also reduced the noise level in the cabin by using larger propellers. They can deliver the same active power as their predecessors did, but at a lower speed," explained the Chief Engineer.

The Challenge of the Hovercraft

The challenges in designing a hovercraft start, however, when looking at the geometry and design of the centre of gravity. To make a structure hover that has a floor area of 22.4 times ten metres, i.e. the size of a tennis court, requires sophisticated engineering: the hull of the vehicle is equipped with a skirt made of special composites. An air cushion, which is generated by fans under the hovercraft, start to make the vehicle hover. One and a half metres above the ground, the amphibious vehicle can then be moved forwards by means of the propeller at the rear. The propeller shafts and the electric motors for operating the lift fans are powered by the MAN twelve-cylinder engine. The engines are mounted as low as possible in order to generate an ideal centre of gravity.

In addition to being used as a passenger ferry, hovercraft are already in use in many other fields. Border guards, the coast guard and disaster relief, among others, use these amphibious vehicles. The outstanding feature of the hovercraft is that they can be used on almost any surface, something that confers considerable advantages, especially in developing countries that have a poor infrastructure. For the operators of Hovertravel Ltd., the characteristics of the hovercraft are also worth their weight in gold. Due to their very nature, they are independent of the tides, and at low tide they can even travel right up to the location for the next bus connection, therefore saving passengers a long walk. It is impossible for ships, however, to enter these areas.