Will electric be the ultimate green?

Eyes on the electric-drive vehicle market. 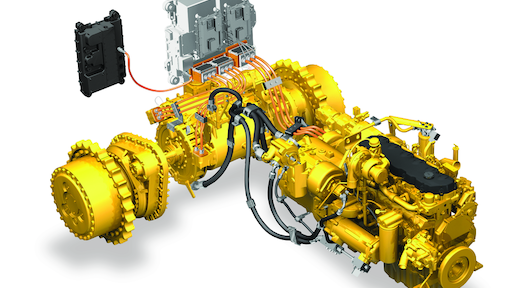 The recent ConExpo/ConAGG show in Las Vegas gave us a glimpse of the future. Deere introduced its 944K and 644K wheel loaders, both of which use electric drives. The 944K, available in 2013, uses traction motors on each wheel while the 644K uses an electric motor to power the wheel loader through a conventional transmission.

At the last ConExpo, three years ago, Caterpillar introduced it’s D7E bulldozer that it claims is 10% to 30% more fuel efficient than the company’s own conventional drive dozer. Most manufacturers have been experimenting with diesel/electric hybrid designs – Volvo, Komatsu and New Holland wheel loaders for example, that use batteries to store energy when the machine is not using full power, much like the hybrid automobiles on the market today. In Japan both Komatsu and Hitachi have been selling electric-drive excavators for use in dense urban environments where noise suppression is important.

The move to electrics is being driven for a number of reasons:

Fuel economy. Diesel engines can be operated at peak fuel efficient performance levels to drive a generator. Controlling the power is relatively easy these days with solid-state electronics and onboard computers. There is no need for the engine to speed up and slow down as the operator moves through the loading cycle.

Lower diesel emissions. Emissions from a diesel engine operating at a constant rpm are easier to control than those from an engine that is constantly accelerating and decelerating.

Less horsepower required. There is less horsepower lost with a diesel/electric system than with a diesel/hydraulic system. The engine is connected directly to a generator and there is no power loss. Some estimates I have read indicate this type system is close to 90% efficient. In a conventional drive-train the engine power is transmitted to the transmission through a fluid coupling such as a torque converter. Estimates are that those systems 75% to 80% efficient.

Using electricity to power construction machines has been around a long time. R.G. LeTourneau, a California contractor turned inventor/manufacturer, pioneered the use of electric motors and controls to power equipment he built and used to build highways and dams in California. In the late 1930s he moved his business to Peoria and is often credited with having provided the U.S. and its allies with as much as 70% of the construction equipment used in WWII. After WWII he adapted his electrics for domestic use. One of the first scrapers, the TournaPull that is still remembered today by industry veterans, was powered by fully encapsulated electric motors. The TournaPull is also remembered for faulty steering switches that would fail at inopportune times resulting the operator losing control and the scraper traveling around in tight circles. LeTourneau’s legacy continues today. Electric-hub-drive wheel loaders are still manufactured at LeTourneau in Longview, TX, but it is owned by the Rowan Corp.

Electric hub-drive motors are still used on large mining trucks. Unit Rig (eventually purchased by Terex and now owned by Bucyrus that Caterpillar is about to buy) introduced the world’s largest mining truck in the late 1950s rated at 85 ton load capacity which in its day was a behemoth. Electric power was the only way to transmit enough horsepower for a truck that large. Of course, today the largest electric mining trucks have carrying capacities of more than 400 tons. Tires, not horsepower, are limiting the development of larger trucks.

The need to make construction and farm equipment more economical to operate will drive development of electric traction motor and generator driven vehicles. The development of the market will more than likely be evolutionary rather than overnight revolutionary.

Hydraulics will still have a major role to play for use in machine controls for years to come, but equipment manufacturers should be aware of the trend toward electric drive. There is an elaborate hydraulics infrastructure that has developed over many years that will be hard to duplicate for electrics, such as component suppliers and distributors.

Equipment distributors are one group that will have to train or retrain their technicians to work on electric drive machines. There are a whole generation of distributor technicians that will find it difficult to make the transition from hydraulic to electric.

Manufacturers of hydraulic systems and the components used for those systems need to be aware of these developments and prepare a strategy that will meet the future needs of their customers.

For the EU’s newest regulation, engine manufacturers are focusing on customer benefits in addition to emissions compliance.
Sara Jensen
October 16, 2018

Among the technologies FPT is exhibiting during the show is its new Cursor 9 CNG engine offering power output up to 400 hp, as well as its HI-eSCR with a NOx conversion efficiency over 95%.
FPT Industrial
September 21, 2016
Follow Us