The company will be its tunnel mixer which can be sclae to any diameter, as well as a space-saving catalytic converter. 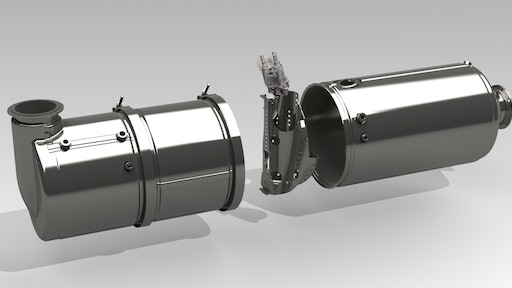 As a leading supplier of Euro 6 and EPA 10 exhaust systems for commercial vehicles, Eberspaecher develops customized solutions for the clean mobility of tomorrow. Developments such as the tunnel mixer for improved AdBlue treatment or the oval canning for commercial vehicles contribute to its worldwide success. The Esslingen-based company will be presenting the latest technologies in emission control systems at the IAA Commercial Vehicles show in Hanover.

Most truck manufacturers in Europe and the USA already rely on Eberspaecher to meet the strict emissions directives. “The internal combustion engine will continue to play a major global role in long-distance transport in the future. The more widespread penetration of emission standards such as Bharat Stage 6 and China 6 means that we are seeing a great deal of potential, particularly in the Asian market,” explains Dr. Thomas Waldhier, COO of the Exhaust Technology Division. Especially in demand in Asia, but also in the American region, is the new, cost-optimized inline system. The exhaust system is fully customizable for heavy-, medium- and light-duty trucks. The configuration of oxidation catalytic converter (DOC), Diesel particulate filter (DPF) and selective catalytic reduction (SCR) on one axis is characteristic.

One innovation for inline systems is the tunnel mixer, which can be scaled to any diameter. It ensures optimum treatment of the urea-water solution in a confined space and thus the efficient reduction of pollutants. The mixer is optimized for different AdBlue injectors and installation space requirements. The design with the two deep-drawn formed parts ensures optimum evaporation and mixing of the urea-water solution with the exhaust gas. As a result, the ammonia released is distributed homogeneously and reacts with the nitrogen oxides in the SCR catalytic converter to form harmless nitrogen and water. At the same time, the innovative mixer design minimizes deposits. Thermal management in exhaust systems also plays an important role in improved pollutant removal: “We work closely with well-known institutions to find even better solutions for reducing nitrogen oxide and CO2 emissions, at low temperatures for example,” says Dr. Waldhier.

The catalytic converter requires large monoliths, which are stored in metal housings. In the so-called canning process, these coated substrates have to be accommodated in metal housings with the aid of mounting mats. Factors that must be considered are the lack of space in the exhaust system, the thermally demanding installation situation and the high load over a long period of time. With oval canning for commercial vehicles, Eberspaecher has developed a concept for optimizing the degree of space utilization. In the future, other shapes, such as a rounded rectangle, will also be possible. The solution developed by the Esslingen-based exhaust gas specialist makes optimum use of the installation space and improves the flow to the substrates. Vehicle manufacturers benefit from greater flexibility in integrating the catalytic converter modules.

In order to save weight and size of the emission control system, Eberspaecher has developed a compact solution – the ultra-efficient 1Box. It combines Diesel oxidation catalytic converter (DOC), Diesel particulate filter (DPF) and SCR system in just one system. The 1Box is up to 40% lighter than a conventional system and convinces with a rapid response and a reduced exhaust gas back pressure.

Come and have a face-to-face with Cummins at ConExpo 2023, in Vegas. Find all the innovation and expertise you want at booth S84615 in South Hall 4.
February 1, 2023
Emissions Control & Exhaust Systems