Scania's new Technology Center in Brazil is equipped with engine test cells that will enable the company to develop, test and certify its engines. 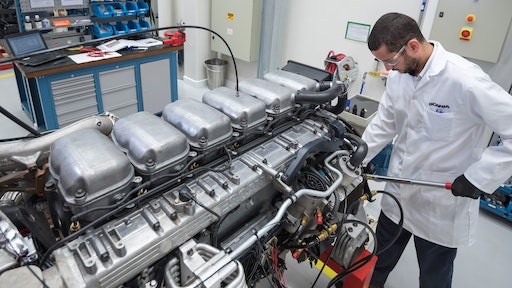 Scania has inaugurated a €10m Technology Center in São Bernardo do Campo, Brazil, with engine test cells that will be used for the developing, testing and certifying of its engines.

“With this initiative we are placing Brazil within the context of the most cutting-edge technology in the automotive sector, reflecting, at the same time, our commitment to the country and to a sustainable transport system,” says Per-Olov Svedlund, President and CEO of Scania Latin America.

Consisting of two cells, the Tech Center meets the latest demands for Euro 6 emissions measurement capability, preparing Scania for the global implementation of tougher emissions legislation. The Tech Center will be integrated into the company’s existing development organization for new global products, support the local certification of future emission legislations, and also support the global production system for Scania’s wide range of engines.

“With this structure we are meeting, on the one hand, the growing global demand for engine tests, led not only by an improvement in income but also the search for more sustainable technologies. On the other hand, we are strengthening Scania’s position as a company that is driven by innovation and engineering, and also strengthening our position as a leader in the use of alternative fuels and in the development of new products,” says Henrik Alfredsson, Vice-President of Research and Development for Scania Latin America.

Research and development into new technologies is already embedded at Scania’s Swedish headquarters, but the new Brazilian test cells accelerate this process, which is key to Scania’s vision of sustainable transport.

The laboratory is able to test and monitor the performance of up to two engines at a time, giving access to the test data for test engineers locally or even remotely from Sweden. The information captured will be used as a basis for new engine designs, or for improvements to Scania’s existing vehicles.