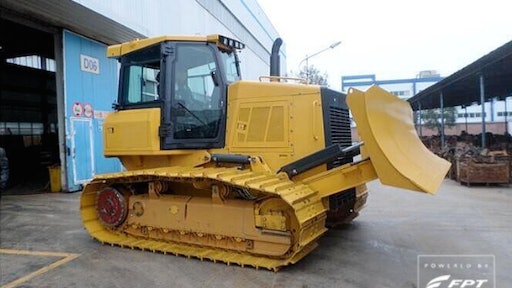 Paris welcomed the 11th edition of Intermat with more than 1,500 exhibitors. FPT Industrial was one of them which actively participated at its own booth (Paris Nord Villepinte, Hall 5A) and its network of partners.

Last year, FPT Industrial signed a long-term partnership with Shantui Construction Machinery and now it is strengthening this relationship by powering two of Shantui’s dozers on show at Intermat.

The dozers – DH13K and DH16K – are both powered by FPT Industrial NEF engines, that witnesses reliability as well as expertise and market appreciation thanks to more than 1.7 million units produced since 2011. Both these applications are equipped with N67 Tier 4 Final/Stage IV engines, which also feature the FPT Industrial patented HI-eSCR after-treatment technology. This solution is also ready for Stage V by maintaining the current cabin layout design. As for power, the engine mounted on the DH13K can reach a peak of 118 kW, whilst the one on the DH16K can go up to 142 kW.

Plus, FPT Industrial's EGR-free technology guarantees the same cooling package dimensions across emission stages, ensuring no engine installation changes from Stage III to Stage V. FPT provides Shantui with its modular engine global offering (which is up to 10% more compact than competitors average dimension) in order to minimize switching costs across emission stages for the company.