The new DLG-Agrifuture Concept Winner is awarded to five pioneering achievements and visions for the future in agricultural technology. 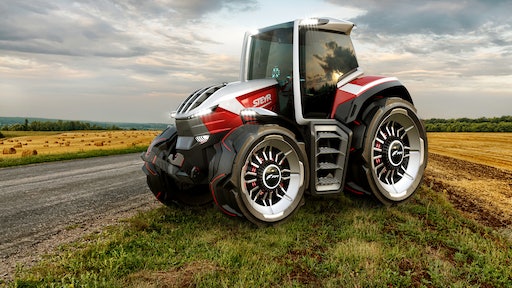 The hybrid drivetrain for Steyr's Konzept tractor is one of several technologies nominated for the Agritechnica DLG-Agrifuture Concept Winner award.
Steyr

Honoring innovations in the agricultural industry is a key element of every Agritechnica show. While the 2022 event is cancelled, organizer DLG (German Agricultural Society) is still presenting awards to showcase the many technologies in the industry which aim to help improve operations for farmers.

Winners have already been announced for the Agritechnica Innovation Awards, and winners of the Systems & Components Trophy - Engineers' Choice award were recently announced on February 8.

New for the 2022 event is the DLG-Agrifuture Concept Winner, an award which looks to honor pioneering achievements and visions for the future of agricultural technology states DLG in its press release announcing its nominees for the award. According to DLG, the new award focuses on the technical possibilities in the next 5-10 years and explores the realistic chances of implementation.

Ten technologies were nominated for the award, from which five were selected as winners during a second round of judging by a jury of independent international experts. Winners were announced during a virtual ceremony held online as part of the Agritechnica digital program on February 15.

“With this new concept award, the DLG is actively supporting pioneering ideas that lead the way to future global crop production. The new award focuses on the technical possibilities in the next 5-10 years and explores the realistic chances of implementation. We look forward to seeing more such future concepts at Agritechnica in 2023, which is the perfect platform for agricultural machinery innovations,” explained Florian Schiller, Project Manager Digital Agriculture, DLG.

Winners of the DLG-Agrifuture Concept award

The 10 technologies nominated for the new Agritechnica award cover a range of components and systems that could greatly benefit farmers' productivity by enhancing operation of their machines as well as data collection and more.

Per DLG's press release announcing the nominees, the selection criteria for the award includes aspects such as the innovative character and practical relevance of the concept, its transferability to other agricultural regions, a realistic chance of implementation and compliance with the United Nations Sustainable Development Goals. Depending on the applicability of the concept or technology, further points such as climate and soil protection, conservation of water and nutrient resources and biodiversity as well as aspects of plant protection and labor management are included in the evaluation as further criteria.

Following are the winners of the award, with descriptions provided by DLG in its press releases announcing the nominees and winners.

Amazonenwerke H. Dreyer SE & Co. KG has developed a method for uniform row widths to promote biodiversity called Controlled Row Farming. This concept is a new arable farming method for agriculture in which every crop-cultivation step is carried out in relation to a fixed row, offering yield optimization despite lower use of fertilizers and pesticides. By cultivating crops in a fixed and uniform row spacing of 50 cm (grain in double rows) and including a row offset of 25 cm for positive crop rotation effects, both yield optimization and maximum efficiency of farms inputs are achieved. The option of introducing companion planting between the rows of the main crop increases the value of the agricultural ecosystem, e.g. by reducing water evaporation and erosion.

Spot Farming for a Holistic and Sustainable Crop Production System

The Spot Farming concept is a joint development project by Technische Universität (TU) Braunschweig, Johann Heinrich von Thünen Institute (TI) and Julius Kühn Institute (JKI). It places the living and growth conditions of individual cultivated plants at the levels of the plant, the field and the surrounding countryside at the center through in-depth observation by the farmer. On this basis, an attempt is made to optimize four points: To select optimal crops or varieties for the respective site conditions, to improve spatial and temporal management practices, to increase the efficiency of agrochemicals and to strengthen functional structures in the agricultural landscape.

Kubota Germany GmbH collaborated with Tevel Aerobotics Technologies to develop its automated fruit picking system concept. The harvesting machine uses an innovative combination of wired drones and corresponding solutions for logistics. The drones are equipped with wind compensation which ensures safe and efficient operation in most weather. Reaching almost every fruit, and harvesting without any bruising, the drones detect and grade the individual fruit in real time, enabling pre-sorting and selective harvest. Information is transferred to the logistics system, optimizing this harvesting step. Levels of automation are offered, from a simple 'navigation system' for tractor driver transporting the bins to fully autonomous carries which places empty bins and collects full ones. The concept can be integrated into existing harvesting operations and work processes. Benefits include less food waste and yield increases of 20%.

The integrated drift management concept from Bayer AG Crop Science Division is based on the reading of information on the spray drift tendency and buffer zones as well as distance control shown on the labels of pesticides. When the pesticide is poured into the sprayer the saved information is translated into an application map. At the same time, wind direction and speed are recorded in the field in real time. If required, drift-reducing spray nozzles are activated and buffer zones and distance control are maintained, all automatically. The system records and saves all activities including weather information.

In the context of the climate change debate, alternative concepts for mobility are at the top of the agenda. The H2-Agrar Project from AGCO Fendt aims to identify the potential and perspectives of hydrogen usage in agriculture. Innovative solutions are underway showing not only that decentralized hydrogen production and use in agriculture can be economically successful but also how hydrogen-powered agriculture with a corresponding hydrogen infrastructure can be integrated into an overall system of hydrogen supply and ‘sector coupling’. In this way, questions about mobility can be processed using hydrogen-powered tractors and possible hydrogen mobility solutions can be demonstrated and tested. The concept also includes the transfer of local approaches and results to other agricultural areas.

Though only five concepts were selected as winners of the new award, all 10 nominees highlight the range of automation taking place in the agricultural industry. Following are the 10 nominees, with most descriptions provided by DLG in its press releases.

The Agricultural Industry Electronics Foundation (AEF) has developed the Common Coverage Map to help improve machine-to-machine (M2M) communication. M2M communication is both manufacturer-independent and direct wireless, which brings about challenges with radio standards, transport layer protocols and secure communication methods. The Common Coverage Map represents an extension of today's ‘section control’ functionality within the ISOBUS standard to include a multi-machine solution in mixed fleets for cooperative fieldwork. On this basis, several machines can work together in one field by exchanging guidance lines and field boundaries.

AGCO Fendt also has an intelligent automation project nominated for the award. This project looks at the possibility of intelligent automation of tractor/cultivation systems with self-optimization capabilities based on a machine learning approach derived from in-field data. Using this approach, the requirements for the agronomical quality of work can be met, independent of the skill of the operator. At the same time, efficiency is increased, which means fuel consumption and emissions are reduced, performance is increased and more acreage can be cultivated in less time.

In the Bosch Off-Highway Vision System, the data generated by various cameras, radar and ultrasonic sensors are aggregated on a central display. The video stream of a multi-camera system is displayed and an overlay of the objects detected by radar and ultrasonic sensors is added. Thus these objects are highlighted visually. The intelligent combination enables machine manufacturers to perform rapid prototyping with a detailed comparison of the sensor systems.

The system is also nominated for the Systems & Components Trophy - Engineers' Choice award.

CNH Industrial's Connect Protein concept offers every party along the value chain from producers to traders and buyers full transparency throughout the entire growth cycle of the crops. For this purpose, the agronomic data from all the various cultivation steps are collected centrally. After the harvest, a complete yield and quality report can be created covering the entire cultivation cycle.

The Steyr brand of CNH Industrial is also nominated for its hybrid powertrain concept which is based on a hybrid electric transmission and is designed for modern high-performance tractors. The aim of the development is to increase the power density and load capacity of the tractor. For this purpose, a parallel and serial hybrid architecture is coupled to the existing dual clutch transmission and supported by supercapacitors. The new drive concept offers new hybrid functions that can significantly improve tractor productivity and driver comfort.

This hybrid drivetrain is the next step in the development of the company's Konzept tractor which it introduced at Agritechnica 2019. According to Steyr, the drivetrain is a conceptual study that will not go into production but includes features that could be part of future tractor designs.

“While not set for production as a whole, this study blends a number of technical developments that may appear on future STEYR tractors, and underlines how we are always seeking to harness the very latest technology make our machines more productive for the customer,” said Peter Friis, Head of STEYR Europe Commercial Operations in the company's press release announcing its award nomination.