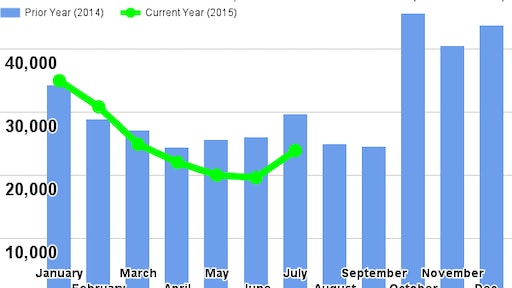 FTR has released preliminary data showing July 2015 North American Class 8 truck net orders rose for the first time this year to 23,920 units. This is up 21% month-over-month, but down 19% versus last July. Class 8 orders were much higher than expectations as a few big fleets placed their large 2016 requirement orders a few months early. Orders were down year-over-year due to a similar, but heftier, spike last July. This follows a comparable rise in commercial trailer orders in June. The market remains robust with Class 8 orders totaling 356,000 units over the last 12 months.

Don Ake, FTR Vice President of Commercial Vehicles, comments, “This is a strong order number for July. Even though most of the market was subdued, the fact that some big fleets have the confidence to place huge orders right now is a great sign for the Class 8 market going forward. Fleets are positive because freight markets continue to grow. We may see more of this early ordering trend the next two months before the peak order season starts in October.”

Final data for July will be available from FTR later in the month as part of its North American Commercial Truck & Trailer Outlook service.