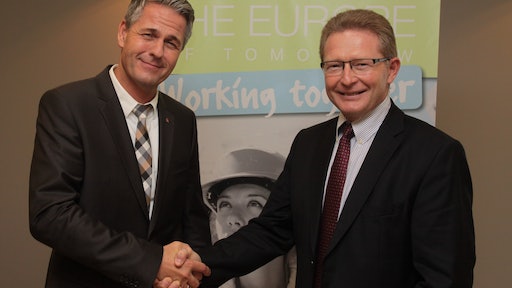 Bernd Holz, Managing Director of Ammann Verdichtung GmbH and Ammann Sales Director Europe (North) has taken up the CECE Presidency on behalf of the Czech association SVSS as of January 1, 2016. Holz succeeds Eric Lepine (Caterpillar, Agoria), who served as President in 2014 and 2015. The new CECE leadership team is completed with Giampiero Biglia (CNH Industrial, Unacea) who moves from second to first vice president, and Lars-Göran Andersson (SACE, Volvo) who was recently elected CECE second vice president.

“The CECE priorities for the next term include the completion of the new engine exhaust emissions legislation in all its technical detail, as well as activities in the fields of outdoor noise regulation and machine safety standards, including the drafting of a new standard for machine visibility,” says Holz.

Within CECE, multiple groups of dedicated experts are collecting and sharing their knowledge in order to produce technical insights and contribute to an informed decision-making process at the EU level.

CECE calls on EU legislators to conclude the engine emissions file for non-road mobile machinery very soon. The target date for a final agreement between the EU Parliament and EU Council was 2015, but discussions are still on-going. CECE is worried about a potential delay and calls on the negotiators to stick to the original planning as closely as possible. The Stage V introduction dates are challenging for construction equipment manufacturers and companies need urgently a final document to facilitate the production of new-stage machines in a secured manner.

European engine emissions limits will soon be the strictest worldwide. Departing CECE President Lepine comments, “The complexity on our production lines will only increase further, having to serve differently-regulated markets across the globe all at the same time. The re-alignment of limit values with the USA would be a minimum condition to look out for in the coming years.” EU regulators should, furthermore, ensure a level playing field in Europe, whether in the coordination and harmonization of local requirements for low-emission zones, or in the enforcement of market surveillance, preventing non-compliant machines from entering EU terrain and distorting the market.

A strong voice for CECE

Thanking Lepine for his commitment in the past two years, Holz adds, “CECE will continue its work to further strengthen the profile of the European construction equipment sector, reinforcing its communication towards EU policy makers and other stakeholders by describing and promoting the importance of the sector for the European economy and society at large.”

An item of particular attention will also be the issue of skills development and the availability of future engineers. “Our sector needs well-skilled young professionals to conceive, design, manufacture and maintain the machines of tomorrow. CECE members and manufacturers already undertake several activities at [the] national level to illustrate the attractiveness of developing a career in the construction machinery and equipment industry. We will make an effort to put these initiatives in the spotlight and add a European dimension where relevant,” says Holz.

The industry’s European outlook for 2016 is moderately positive, although industry is facing many uncertainties in the economic and political sphere which make it difficult to predict developments with a degree of certainty beyond the next 6 months.

“The current forecast, based on CECE statistics, is for the market to remain flat in 2016 compared to 2015,” says Holz. “The divergences in Europe will further diminish but remain relatively large, with a gap between the northern and southern European markets. We expect the French market to improve somewhat, bouncing back from a very weak performance in recent times. The German and UK markets are at high levels historically and cannot be expected to keep growing at the same pace."