The FTR Trucking Conditions Index reached a reading of 1.69 in May due to lower freight rates and capacity utilization negatively affecting truckers. 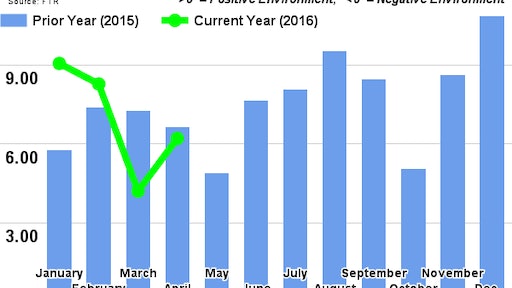 FTR’s Trucking Conditions Index (TCI) for May fell to its lowest level since 2011 at a reading of 1.69, nearly five points lower than the previous month. Negatively affecting truckers are lower freight rates and capacity utilization that has dropped below 95%. Looking forward, trucking companies could benefit from a reinstatement of the hours-of-service 34-hour restart conditions that have been batted around in the halls of Congress this summer. If a version of the regulation does go into effect it would likely tighten capacity enough to move pricing. The TCI is currently forecasted to rise into the mid-single digits later in the year, reflecting weak economics up against expected regulatory drag combining to neutralize positive and negative factors affecting the trucking sector.

Jonathan Starks, Chief Operating Officer at FTR, comments, “One of the struggles right now is to bridge the gap between what the economic data is telling us and what the anecdotal evidence from carriers is telling us. Part of it has to do with simply how the industry participants feel relative to 2014 and 2015. The market was WAY up in 2014. Conditions were ideal for spot market players – regulations tightened capacity and weather exacerbated it. Add in some relatively strong economic growth and carriers were feeling extremely good. Now? Capacity has loosened. Spot rates are down, so revenues are down. And recently the contract market has taken a cue from the looser capacity, and weakness has been seen in this sector as well. Surcharge revenues are also way down – which impacts revenue (even though it generally has less impact on the bottom line). Put it all together and you end up with a market that isn’t extremely favorable for carriers, nor is terribly bad. Revenues are down across the board and that makes business operations more difficult, but freight levels are stabilizing and capacity-sapping regulations are coming down the pike - either this year or next.”