Thirty-eight articulated haulers from Volvo CE were used to help with the clean-up efforts following a dam break in Tennessee. 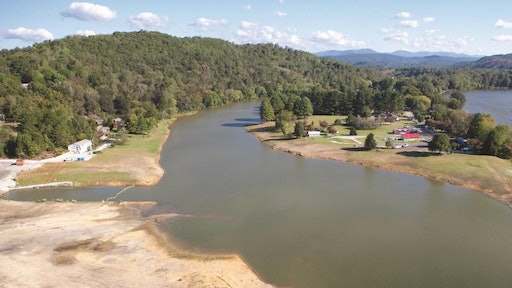 When a natural disaster strikes, it receives mass-media coverage for a short period until interest fades and attention is turned to another disaster in another part of the world. But for those living in the region, this is when the real work of clean-up and restoration begins.

At 1 a.m. on December 22, 2008, just outside Kingston in the U.S. state of Tennessee, house owners were woken by a very loud noise. Daylight revealed that 4.2 million cubic meters (148 ft³) of wet coal fly ash slurry from a power plant burst out of a dam and flooded 1.2 square kilometers (0.5 miles²) of once beautiful landscape, and spilled into the river and waterways. It was the largest slurry discharge in U.S. history. Miraculously, no one died, but local residents were hit hard as electricity was cut.

The clean-up began immediately and was initially estimated to take just over six weeks, but after six months, only 3% of the spill had been cleared, and it will likely take until 2014 to complete the work. The Tennessee Valley Authority (TVA) supplies electricity to more than 700,000 people through the Kingston plant, which burns over 140,000 tons of coal a day. This produces an enormous volume of ash which is stored in the dam that burst.

“The TVA’s immediate response to the accident was all hands on deck,” explains Tim Russ, operating manager at the recovery site. “Together with the Environmental Protection Agency and the Tennessee Department of Environment & Conservation, we focused on the time-critical areas first, making sure the spill didn’t get further downstream.”

The work of moving the spill from the embayment involves a great deal of loading, pushing material and placing it in dry storage. Most of the load is being carried by 38 Volvo Construction Equipment (Volvo CE) articulated haulers, which have replaced a fleet of other machines. TVA has a contract with ASC Construction to provide the haulers. The local Volvo dealer has six U.S. branches that span four states.

“There were many other brands of equipment here earlier, but Volvo CE has replaced almost all of them,” ASC account manager Dave Parker explains. “Today, they’re the preferred articulated haulers within the TVA Civil Projects Group due to their load capacity, hauling speed and uptime fuel economy. The equipment on site now has the right tools for the tasks we’re trying to perform.”

Even though there are still two years to go before the recovery is complete, it is difficult to believe that the area was once completely submerged in gray slurry. Large stretches of the river have already been returned to their original condition.

“We are committed to putting the area back to better than it was before, and that includes creating areas for the public to use. So, we are planning to build parks, walking trails, and baseball and soccer fields,” Russ adds.