The facility is located in Passo Fundo, a city in the southern state of Rio Grande do Sul. 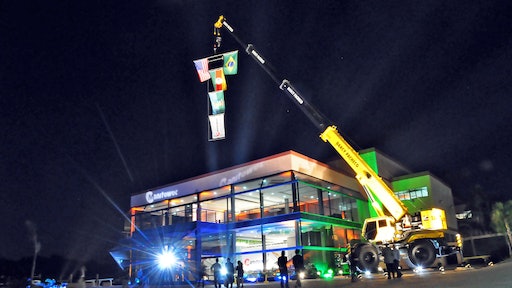 Over 400 people attended the inauguration of Manitowoc’s new factory in Brazil on March 31. The facility is located in Passo Fundo, a city in the southern state of Rio Grande do Sul. It is the company’s first crane factory in Latin America and will initially supply Grove rough-terrain cranes, not only to Brazil but across the region.

Customers and crane owners throughout Brazil traveled to the event, while others flew in from countries including Argentina, Chile, Colombia, Peru, Panama and Uruguay. Among those attending the inauguration were senior politicians, including Michel Temer, Brazil’s vice president; and Fernando Pimentel, Brazil’s Minister of Development, Industry and Foreign Trade. Also at the event were members of the press, factory suppliers and Manitowoc’s senior management team.

“The Brazilian crane market is one of the fastest growing in the world, and Manitowoc has a long history both here and throughout Latin America. Over the past five years we’ve expanded our sales and Manitowoc Crane Care operations to ensure we have the best infrastructure to serve our customers. Now, with this Passo Fundo factory, we can give them locally-manufactured cranes that are ideally suited to their needs,” says Larry Weyers, Executive Vice President for Manitowoc in the Americas.

The factory will initially manufacture a range of Grove rough-terrain cranes, which have already been popular with contractors and rental companies in Latin America. Allowing customers to source these cranes faster and more cost-effectively through Passo Fundo will increase their popularity further.

Manufacturing will begin in mid-April, and the first deliveries from the factory will take place in mid-June. The design of the factory is tailored to local manufacturing methods and materials, but it also includes operational elements and best practices from Manitowoc’s other Grove production sites in Shady Grove, PA, USA, and Niella Tanaro, Italy.

Heading up the new factory is Mauro Nunes da Silva, general manager of operations. He says the biggest challenge in preparing the factory was the short timeline for construction.

“Once we received local government approval to build our factory in Passo Fundo, we wanted to start making cranes as soon as possible,” he says. “Overall, it’s been less than 12 months between the signing of initial agreements and this inauguration. The construction timeline was very tight, and we encountered delays from severe weather along the way. But we achieved our timetable and it’s all thanks to the fantastic efforts of the team here.”

Nunes da Silva joined Manitowoc in 2006 serving in roles in finance and control before taking on the job at Passo Fundo. He says the goal of the new factory and its team is to continue to strengthen Manitowoc’s reputation in the local market.

“At Passo Fundo we are committed to producing high quality Manitowoc cranes that exceed our customer expectations,” he says. “We will deliver industry-leading cranes, promptly, and make sure we meet our obligations to our customers, our stakeholders and ourselves.”

To start, the cranes produced at Passo Fundo will comprise 30 percent locally-sourced components with the other 70 percent imported from the U.S. Manitowoc said its goal is to reverse these figures over the next three years. Currently there are 55 staff members employed full-time at the facility.