Volvo Construction Equipment will have several new pieces of equipment on display at INTERMAT 2012. 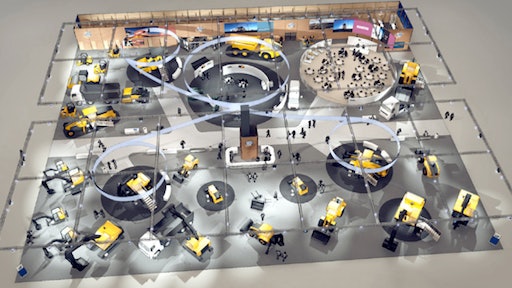 For Volvo Construction Equipment, innovation and a constant desire to improve have always been crucial to every design – and it shows in the company’s newest product offerings. These qualities are on  full display at INTERMAT 2012, where Volvo CE is unveiling a range of new machines in its 3,726 m2 (40,110 ft2) of stand space, under the theme of ‘Discover A New Way.’

Pat Olney, the company’s President and CEO, hosted an international press conference during the show, in which he highlighted trading conditions and introduced the new product line up.

Under the spotlights of Paris’s Parc des Expositions, machines are arranged by customer use and application, demonstrating how Volvo products are designed to work together as a total customer solution. A wide range of new fuel-efficient products and services are shown. Highlights include the new D-Series excavator range, including the ECR145D/ECR235D reduced radius excavators, the new EW range of wheeled excavators and the heavy duty EC380/480D excavators, which meet the strict requirements of European emissions legislation while offering power, reliability and superior cycle times.

Also on show is the all-new C-Series wheeled and tracked skid steer loaders, as well as the new range of G-Series wheel loaders including the L45G and L50G mid-sized wheel loaders and the larger L60/70/90G wheel loaders. There is plenty of innovation to discover among the company’s road machinery products too, including the new DD25 double drum compactor and P7820C ABG asphalt paver.

Gold at the Intermat Innovation awards

Volvo CE also picked-up an award at INTERMAT itself, after winning a gold award at the INTERMAT Innovation awards for its new On Board Weighing system. Designed for its F-Series Full-Suspension articulated haulers, the OBW uses pressure sensors on the suspension to log all transported loads and allow complete payload management – giving access to data such as total transported load in tonnes; tonnes transported per liter of fuel; and number of cycles.

Also highlighted by the company is its new agreement with the WWF (World Wide Fund for Nature) Climate Savers program, an initiative shared with Volvo Buses and Volvo Group Truck companies. The new agreement sees a combined commitment by Volvo to reduce carbon-dioxide emissions by 30 million tons from construction equipment, buses and trucks manufactured between 2009 and 2014. The agreement makes Volvo CE the first construction equipment company to join the program and its joint venture partner SDLG the first company in China to join.

Highlighting the breadth of the Volvo Group, Volvo Construction Equipment is joined at INTERMAT 2012 by sister companies Volvo Penta – which is presenting its own advanced solutions to meet the requirements of the EU and U.S. emissions legislation – and Volvo Trucks, which will show its latest generation of construction-focused trucks.

Volvo Construction Equipment has come to INTERMAT 2012 with a positive outlook based on a growing reputation for providing customer solutions and support – and arguably the most innovative fleet of products and services on the market.