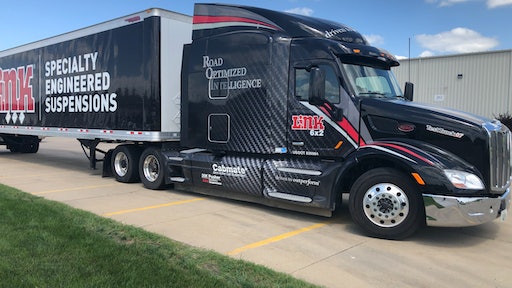 Link Manufacturing has introduced its new ROI Cabmate semi-active cab suspension aimed at improving safety and comfort for heavy-duty vehicle operators. In addition, it helps ensure the protection of electronics and other components within the cab.

The suspension is part of a portfolio of products called road optimized innovations (ROI) which enhance the performance of Link’s traditional suspensions through electronics. In most cases, an engineered algorithm will be incorporated into software as a means of increasing efficiency of the suspension.

According to Michael Hof, Vice President of Business Development at Link, the company started working on this product 10 years ago because the industry was looking for a better performing cab suspension. “The ROI technology will enable suspension systems to respond in real time to driving conditions and events,” he says. “Whatever the road condition is dictating, our suspension can respond to it.”

The real advantage, he says, is the suspension levels out the ride no matter what inputs are being received by the vehicle. This ensures an even, comfortable ride for operators.

Multiple sensors built into the suspension constantly asses the terrain and travel of the vehicle. An accelerometer is located under the cab to monitor the cab’s motion and reacts accordingly. Position sensors measure the position of velocity and cab movement relative to the frame. Signals are transmitted from the position sensors and accelerometer to the suspension’s electronic control unit (ECU).

The ECU uses Link’s proprietary algorithms to interpret and process the sensor information in real time. This enables a consistent state of dynamic dampening, and adjustments to be made 100 times per second.

Hof says the system operates on less than 10W of power, ensuring it will not be a major draw on the vehicle’s battery.

A patented adjustable height control linkage created by Link is included as part of the suspension system to help assure proper alignment of the cab and suspension with one another. It also ensures a constant flow of air pressure.

While the current Cabmate suspension technology has been well received by OEM customers, Hof says the company believes the new ROI Cabmate technology will be an even better system.

On a typical cab suspension there are shock absorbers, air springs, height control valve, linkage between the cab frame and the frame of the truck. The height control valve reacts to every bump on the road, constantly filling and exhausting air from the springs based on the events being experienced by the suspension.

The ROI Cabmate, on the other hand, uses the accelerometer and electronic height control to evaluate the road inputs and make adjustments as necessary. Essentially, it ignores inputs from the height control valve and instead looks at long-term changes to the height of the cab and makes changes according to those conditions, explains Tye Davis, Senior Engineer at Link.

“We're taking sensor information from the accelerometer and the position sensor, and using that to control the amount of shock force,” he says. “So it's not just proportional to suspension velocity, it's proportional to that control command that allows us to switch very rapidly between a soft setting for the shock absorber and a stiff setting.

“Even during the course of an individual bump we can change [the setting] multiple times,” adds Davis. He says this allows for better performance to be achieved than with other cab suspension designs.

All of the components, including the electronics, are rated for outdoor use and feature an IP69 rating. While the suspension was developed for and currently being tested on heavy-duty trucks, Davis says it could be applied to additional cab application, including those in other heavy equipment industries. The system couldn’t be taken as is and put directly on a primary suspension as additional engineering would be necessary but “any cab application would be a good fit for it,” he says.

Link designed a new 10,000 sq. ft. (929.03 sq. m) testing laboratory at its headquarters in Sioux Center, IA, which it has been able to utilize for testing of the new ROI Cabmate suspension. The laboratory is an OEM quality engineering laboratory to ensure the company is developing products to its customers’ standards. Bill Ott, Vice President of Engineering at Link, says tests have been developed in partnership with OEMs like Peterbilt and Volvo, and that the lab is capable of running in-house tests as well as those for customers.

In addition to the test lab, the company has purchased a Peterbilt truck to utilize for real-world testing of its products, including the ROI Cabmate.

Hof says when developing the ROI Cabmate, Link set its sights on gathering empirical data from operators in the field and logging at least one million miles of testing of the product. It will then take this data to its OEM customers to verify it’s a validated solution.

The company is partnering with trucking fleets to have them drive vehicles equipped with the suspension system and provide feedback on how it is working in real-world operating conditions. Joel Morrow, Head of R&D and Senior Driver at Ploger Transportation LLC, says he thinks the system will have a major impact on the overall efficiency of the fleet and driver quality of life.

He says the potential for fuel efficiency gains will be achieved by having the ability to shorten the wheelbase of his truck enabling him to close the gap between the tractor and trailer, which improves aerodynamics and in turn fuel efficiency. The first trucks Ploger has put into service with the ROI Cabmate have thus far demonstrated an improved ride when traveling over rough roads.

Captain Fausto Velazquez, President and CEO of Transportadora Consolidada, operates his fleet in Mexico which has some very difficult terrain. He says his drivers have reported less back pain and tiredness due to the improved ride quality the ROI Cabmate is providing. They have also reported a reduction in the amount of noise in the operator cab, further aiding comfort and productivity levels.

“This [suspension] is a quality of life improvement,” concludes Hof.

Suspension offerings include the introduction of the HAULMAAX EX and the expansion of Hendrickson's ULTIMAAX and PRIMAAX EX products.
Hendrickson International
October 8, 2020

At ICUEE 2019, Meritor debuted a lighter variant of its independent front suspension, as well as an enhanced transfer case, both of which are purpose-built for utility and construction fleets.
Meritor, Inc.
October 1, 2019

The Cabmate air suspension for Class 7 and 8 trucks is used by numerous North American OEMs.
Link Manufacturing Ltd.
May 23, 2019

The 105K Triton Tri-Drive Air Suspension is designed for use in multi-axle configurations for heavy-haul and off-highway applications.
Link Manufacturing Ltd.
May 15, 2019

The truck and trailer product lines have expanded availability for galvanized components, and the trailer drum brake models have a new crosschannel and hanger design.
Ridewell Suspensions
October 15, 2018

The Level Load from Standen’s offers a range of air management products, designed and engineered in Canada.
Standen's, an IMT Company
December 1, 2017

AxleTech worked with Altec Industries to develop the system which features an Independent Front Suspension drive axle module for improved safety and vehicle control both on- and off-road.
AxleTech
October 2, 2017

Meritor announced at NACV 2017 it will develop a platform of electric drive axles and suspensions for use in both on- and off-highway applications.
Meritor, Inc.
September 26, 2017
Follow Us