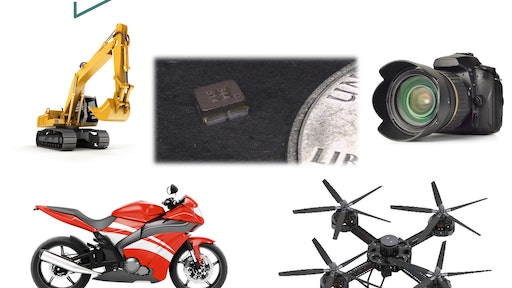 MEMSIC Inc. has released the 624x Family of acceleration and tip-over sensor components that includes four sensors, the MXD6240 and 41AU, MXC6244AU, MXC6245XU.

Signalysis Inc. is hosting a webinar on methods for testing accelerometers.

Mobile cranes, particularly smart cranes, are an example of how safety, efficiency and higher accuracy for crane movement and load placement have benefited from the diverse range of sensors and switches available.
January 13, 2012

Meggitt introduces its high-temperature accelerometer which will operate in temperatures up to 482 C.
Meggitt Sensing Systems
May 31, 2011
Sensors

Several companies will be on hand at the 2011 Sensors Expo & Conference to display their latest technologies.
May 27, 2011
Sensors

Mems technology to be highlighted at Sensors Expo & Conference

PCB Piezotronics' Model 352B70 accelerometer is designed for the extreme conditions of shaker labs.
PCB Piezotronics, Automotive Sensors division
May 18, 2010

HBM releases its 4-channel universal amplifier which supports up to 15 different transducer types per channel.
HBM
May 3, 2010

Endevco Model 5220B Isotron is ideal for use within off-highway and heavy equipment applications.
Endevco Corp.
April 2, 2010
Follow Us