Growing use of camera systems within passenger cars has increased their presence in heavy-duty equipment, as well, bringing improved visibility and safety to the industry. 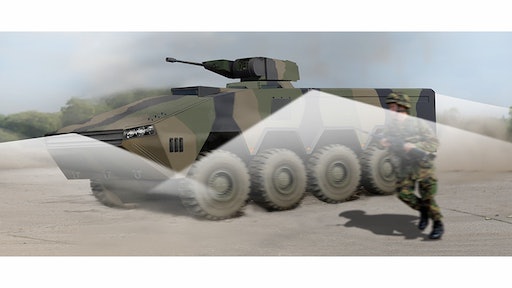 Visibility via camera systems is key in military applications due in part to the increased number of blind spots around the vehicle and its limited number of windows.

Visibility for operators of large, heavy-duty mobile equipment is a constant concern for OEMs. While the use of camera systems on these machines isn’t exactly a new concept, their prevalence has been increasing within recent years. “We’ve seen more interest in off-road vehicles and vehicle types that traditionally wouldn’t use cameras, and I attribute that to the wide application of them in on-road vehicles [such as] passenger cars,” says Corey Heniser, Chief Executive Officer of Brigade Electronics Inc. (company information, 10055127).

Currently only light-duty vehicles, such as passenger cars, are required by the National Highway Traffic Safety Administration (NHTSA) to include backup camera systems starting with model year 2016. However, Heniser and others within the off-road industry see the trend for backup and other types of camera systems growing in heavy-duty applications as operators become accustomed to having them in their personal vehicles. In addition, many fleets have begun seeing the cost and safety benefits of including camera systems on their equipment. “With everyone managing costs tightly, insurance, workers claims and productivity are all aided by cameras – it allows workers to reduce blind spots, injuries and increase uptime. Safety is always first, and cameras allow for it to be achieved consistently,” says Nico Cottone, Chief Operating Officer and Vice President of Business Development at Mobile Awareness LLC (company information, 10056718).

In 2013, Mobile Awareness added digital wireless capabilities to its backup camera systems (learn more, 11271375). Making the system wireless enabled the company to eliminate the “signal” wire used to connect the camera and the monitor, which often runs the length of the entire vehicle. Instead, the company broadcasts the signal from the camera digitally using a specific ID that is paired to the monitor. “Installation is easier, and the signal is locked in,” explains Cottone.

He says the previous analog version had a lot of interference issues. With digital, however, there are no interference problems which make the camera system much easier for fleets to use. Search 11271380 at oemoffhighway.com to see a comparison video of the analog and digital camera technologies.

While backup cameras are the most commonly known and used, systems which provide a full 360 degree view of a piece of equipment are starting to gain popularity. Heniser says the need for 360 degree camera systems came about not only to provide better visibility around a vehicle, but also to make it easier for operators to quickly glance at a monitor to see all of their blind spots at once.

“Over time, the addition of multiple cameras, instead of being a benefit, created a complex network of [multiple] camera views on a screen for an operator to determine what he was looking at,” says Heniser. A 360 degree system, on the other hand, enables operators to quickly glance at a single display to see all blind spots at once.

Brigade’s Smarteye 360 degree camera system uses four cameras centrally mounted on top of the vehicle at the front, rear, left and right sides of the vehicle. Each camera has a fish eye lens which is capable of capturing a 190 degree field of view. Software within the system stitches together the intersecting camera views to provide one overall bird’s eye view of the vehicle, eliminating any blind spots. “Depending on the size of the vehicle and the height of the cameras, it can be very seamless,” says Heniser.

Ensuring the cameras are mounted high enough on the vehicle is necessary to guarantee the best possible views of the vehicle and the area surrounding it are captured. “We find that the higher the cameras are, the better the viewing angles are,” says Mike Kollar, Senior Sales Manager of VE Distribution/SOEM at Continental Corp. (company information, 10281230). He adds that when mounting the cameras, it’s also important to be considerate of the nose of the vehicle. “Here in North America, we have to make sure the camera in the front is mounted high enough so we can see over the nose into that area.”

Continental’s ProViu 360 degree camera also uses four cameras to capture imagery of the entire area around a vehicle and stitches it together into a singular surround view of the machine (product information, 10980997). “You have full visibility of all four corners from a top down view of the whole vehicle,” says Matt Lacko, Product Manager at Continental Corp. “It also increases driver awareness by allowing them to see all the way around the vehicle on one screen.”

In addition to the surround view of the vehicle, the camera display can be configured to provide other views. “[If] you wanted to view a reverse camera with a surround view on the display, you can actually put [both] camera feeds on the display and see them all at once,” says Lacko. Fleets can download software from Continental onto a computer to customize the views; once the configuration is complete, the information is uploaded to the vehicle’s electronic control unit (ECU) and output to the display screen.

Two additional cameras can be added to the Continental system, as well to provide auxiliary views. Lacko says the company once had a customer who wanted to be able to see down into the hole it was digging with an excavator. Continental added a camera to the excavator’s digging claw which provided a view into the hole that was displayed on the same screen as the overall bird’s eye view of the machine.

Creating a more active safety system through the integration of object detection into camera systems will be the next big step for the industry. While a camera system provides a visual warning about objects that may be in a vehicle’s path, they only work if the operator is looking at the display screen. Object detection systems, on the other hand, typically use audio cues such as a loud beeping to alert the operator. Combining the two technologies would bring the audio and visual warnings together into a single system to help further increase safety on the worksite and roadways.

Heniser says Brigade is currently working to integrate its 360 degree camera and its Backsense radar system (product information, 11526602). The radar system works by sending out a signal which bounces off any target within the surrounding area up to 100 feet away from the vehicle. When an object is detected, the system’s monitor emits an audible warning sound, as well as illuminates multiple LEDs. Currently the radar system can be used with the 360 camera by mounting the radar display next to the camera display.

Mobile Awareness’ VisionStat Plus directly integrates the company’s SenseStat obstacle sensor detection system with its VisionStat reversing camera system (product information, 10058652). The VisionStat Plus system consists of four ultrasonic SenseStat sensors that can detect objects within 8 feet of the rear of the vehicle. If an object is detected, the sensors send a signal to the system’s ECU to send out an audible warning to the operator, as well as a blinking display on the monitor that shows the position of the object and its distance from the vehicle. “By overlaying the ultrasonic sensor detection system and audible alarming, the operator can both see the image and know how far away it is in feet and inches,” says Cottone. He says metric measurements are also available.

As these types of integrated systems continue to advance, Heniser sees even more vehicle operations, such as speed, getting incorporated to help create a safe zone around vehicles.

Mobile Awareness has already started to provide such a concept with its MobileTRAQ platform (learn more, 11326439 and 11239047). In addition to providing obstacle detection and backup camera capabilities, MobileTRAQ monitors vehicle data through various sensors on the vehicle. The system can provide tire pressure monitoring, telematics for fleet management, and more. “Integrating cameras and obstacle detection sensors into an ‘all in one’ Smart Monitor Platform like MobileTRAQ, along with tire pressure monitoring, telematics and RFID will allow fleets to leverage their capital purchasing dollars to last longer and go farther,” says Cottone.

Cameras in the military

“Military vehicle drivers are required to take in what is happening around the vehicle at all times,” says K.M. Dekker, Chief Business Development Officer at Orlaco Inc. (company information, 12000290). However, military vehicles tend to be very large and have small windows, creating several blind spots which make visibility a challenge for operators.

The inclusion of camera systems, such as Orlaco’s MilMos camera, is integral to providing the visibility needed in such sensitive working environments. Infrared lighting technology within the MilMos camera provides daytime and nighttime viewing capabilities. Dekker says the camera also includes a “live ticker so that you always see you are looking at a live picture and not a frozen [one].”