Growing sales over the past five years of Bendix's ESP Electronic Stability Program has enabled it to achieve its 400,000 unit delivery milestone. 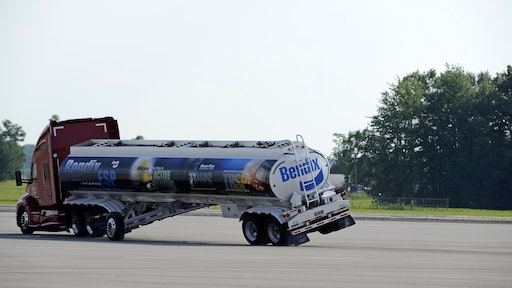 The Bendix ESP full-stability system is not activated on this tanker, which is equipped with outriggers for safety on the test track.

“More and more fleets, truck makers, and drivers are turning to Bendix ESP, and they’re doing so with confidence in a rigorously tested, reliable system that has been proven over many millions of real-world miles since its launch 10 years ago,” says Scott Burkhart, Bendix Vice President – Sales, Marketing, and Business Development. “The technology rewards fleets by helping to decrease the number of heavy truck accidents and improve safety records, while delivering the value they require. As NHTSA’s mandate is implemented, the benefits of full stability will be experienced industry wide and help to improve highway safety even further.”

Bendix, the North American leader in the development and manufacture of active safety and braking solutions for commercial vehicles, introduced Bendix ESP in 2005. It took six years to reach 100,000 units sold, but that mark was tripled in the subsequent three-year period as original equipment manufacturers and fleets sought the technology.

Mack and Volvo offer Bendix ESP as standard equipment on their highway tractors, and it comes standard on the majority of Peterbilt Motor Company’s Class 8 trucks and tractors as well. Other manufacturers offering the Bendix ESP system include International, Kenworth and Prevost. Bendix ESP is also available for more than 80% of all medium-duty chassis configurations at PACCAR and Navistar.

For its stability mandate, NHTSA chose ESC over RSC (Roll Stability Control), or roll-only technology. Fred Andersky, Bendix Director of Government and Industry Affairs, emphasizes that Bendix always prefers to let the market be the catalyst to drive safety technology. The company applauds NHTSA’s decision, and believes ESC is the superior choice for safety, performance and value. In terms of market acceptance, Andersky points out, ESC has been outselling RSC at a rate of three to one, up from three to two in recent years.

First, full-stability systems use more sensors than either roll-only stability or ABS systems, creating a more comprehensive system capable of addressing both roll and directional stability. These additional sensors enable the unit to more quickly recognize factors that could lead to vehicle rollovers or loss-of-control. On dry surfaces, this means the system recognizes and mitigates conditions that could lead to rollover and loss-of-control situations sooner than roll-only options. Full-stability technology also functions in a wider range of driving and road conditions than roll-only systems, including snowy, ice-covered and slippery surfaces. ABS systems are not designed to react to potential roll or loss-of-control situations.

And interventions can also differ. Full-stability systems rely on automatic brake interventions involving the steer, drive and trailer axles, whereas roll-only systems typically apply the brakes on only the drive and trailer axles. Slowing the vehicle quickly helps mitigate rollovers faster, while slowing and redirecting can help the driver maneuver in loss-of-control situations.

Andersky stresses that technologies such as Bendix ESP are designed to assist drivers, not replace them.

“The driver maintains responsibility for the safe operation of the vehicle at all times,” Andersky says. “No technology – regardless of how advanced – is as important as continuous, proactive driver training and alert, safe drivers practicing safe driving habits.”

The Bendix ESP full-stability system is part of the ever-growing Bendix portfolio of technologies that deliver on safety, plus other areas critical to fleets’ success. By improving vehicle performance and efficiency and providing unparalleled post-sales support, Bendix aims to strengthen returns on investment in equipment and technology, helping fleets and drivers lower their total costs of vehicle ownership, and enhancing roadway safety.