An engine manufacturer has expanded its engine range to provide OEMs with a greater selection of products to meet their various application requirements. 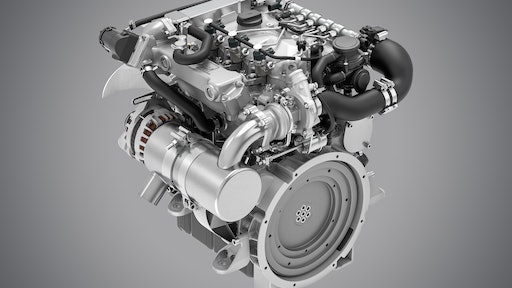 With the addition of these engines, the H Series now provides an overall power range of 18.4-62 kW (24.7-83.1 hp) and torque up to 265 Nm (195.5 ft.-lbs.) to meet manufacturers’ various application needs. According to Hatz, the expanded range also enables an expansion of the types of applications in which the engines can be used (see sidebar below).

In conjunction with the series expansion, the company has implemented a state-of-the-art production line for the H Series. Stephan Gritsch, Marketing Team Leader at Hatz Diesel, said at the 3H50 launch event that the combination of using the latest manufacturing processes with innovative technologies within the engine ensure low fuel consumption, and long maintenance intervals. “All [of] this not only makes working with the machine easier, it also reduces the total cost of ownership,” he said.

Like the predecessor 4-cylinder 4H50 engines, the 3H50 line features many of the core competency technologies which Hatz has developed over its 140-year history. These include the fuel injection system, use of aluminum to lower weight, as well as noise reduction techniques. According to Bernhard Richter-Schutzeneder, Director, Sales and Marketing at Hatz Diesel, the company’s engines are 90% quieter than other engines due to technologies developed in the 1970s.

“[The] H Series combines all these competencies and technologies that were developed over the years,” he said during the launch event. “It’s the first downsizing engine which has a lot of user and customer benefits not only in one engine, but in a complete engine family.”

Downsizing is a key feature of the H Series. This is achieved via the compact size and reduced weight—aided in part by the thin walled gray cast design—of the engines. In addition, Richter-Schutzeneder said their low displacement (2 L/0.5 gal.) also aids the downsizing concept. The lower displacement works in tandem with a high total boost pressure to achieve a high internal efficiency, as well as good fuel consumption over a wide speed range. Because of this, the engines are able to provide high power and torque in a smaller package size, which is particularly beneficial for compact engine compartments. Gritsch said the engines are capable of powering machines that traditionally use significantly larger engines.

Read more about Hatz’s downsizing concept in the white paper “Cleverly Mastering the Motorization of Compact Machines Despite Stage V.”

According to Richter-Schutzeneder, the H Series has shown several advantages in comparison to competitive engines in the 19-55 kW (25.5-73.8 hp) market. In regards to power density, the engines have shown the ability to achieve more than 28 kW (37.6 hp) per 1 L (0.3 gal.) of displacement, which is “way more than anyone else in the market is able to achieve,” said Richter-Schutzeneder. For displacement to torque ratio, which he said is becoming an increasingly more important factor for customers, the engines are able to achieve about 135 Nm (99.6 ft.-lbs.) per 1 L displacement.

The engines’ combustion strategy, known as iHACS (intellgent Hatz Advanced Combustion), aids their performance, as well. “This self-developed strategy is used throughout the whole family,” Richter-Schutzeneder said. “It leads specifically to very high combustion efficiency, low combustion noise and high torque.” In addition, he said it is a Stage V ready technology.

He also emphasized the care put into the packaging of the engine, as well as ensuring lower friction in order to help reduce fuel consumption. Fewer wear parts are included, which has lead to maintenance intervals being extended to 250-500 hours.

The company said it is only using premium suppliers—such as Mahle, Bosch, and Borg-Warner—for the various engine components in order to ensure performance and production quality.

The H Series now includes a total of seven engine models, each of which has been designed to meet various application needs and emissions regulations around the world. The original 4H50TIC engine, for instance, is designed for the 37-55 kW (49.6-73.7 hp) power class and meets EU Stage IIIB and U.S. Tier 4 Final emissions regulations.

In March 2018, Hatz began serial production of the 3H50TIC, an 18.4-46 kW engine also designed for Stage IIIB and Tier 4 Final. The letters at the end of 3H50 engine name refers to the included aftertreatment system components, and thus the emissions regulations the engine meets. Like the other H Series engines, the 3H50TIC includes a common rail injection system, as well as a turbocharger. For the aftertreatment, it features an intercooler, cooled exhaust gas recirculation (cEGR) and diesel oxidation catalyst (DOC).

To meet the impending Stage V emissions regulations in the EU—which go into effect January 1, 2019—Hatz is developing the 3H50TICD, expected to be available at the end of this year. Richter-Schutzeneder said every engine over 19 kW is expected to require a diesel particulate filter (DPF) in order to meet the emissions requirement. The 3H50TICD features a separable DOC/DPF, as well as cEGR. The DOC/DPF system, called optiHEAT, is compact and flexible so it can be installed where the OEM sees fit.

Richter-Schutzeneder said the optiHEAT system has been robustly designed and optimized for long periods between regeneration cycles. It is also able to achieve idle regeneration in which cylinders are deactivated in order to get the highest possible temperature for the system to regenerate itself while the engine is at idle speed.

For markets that are less regulated and have bad fuel quality, Hatz offers the 4H50TI. The company avoided using sensitive components such as EGR and DOC in order to cope with the fuels found in these areas—typically found to have a sulfur count of 5,000 ppm, whereas Europe is at 50 ppm. The lack of an exhaust aftertreatment system also makes it a more cost-effective solution for customers, as well as enables power to be slightly boosted up to 62 kW.

Other than the aftertreatment system, the engine design is the same as its emissions-compliant counterparts in the H Series. Hatz is in the process of developing a 3H50TI version, as well, which is expected in the third quarter of 2019; it will target the 19-37 kW power class and be available to the same markets as the 4H50TI.

Also under development is the 3H50T which targets the under-19 kW power class. As its power output is around 18.4 kW, it is capable of meeting Stage V and Tier 4 Final emissions regulations but without the need for any aftertreatment system. “[We] want to downsize applications under 19 kW in order to help customers avoid [using] DPF, which often doesn’t fit into machine[s], but still meet Stage V emissions,” said Richter-Schutzeneder. “The nice thing is under 19 kW, worldwide all the emission levels are the same, so therefore this is one product for the whole world.”

All of the engines are available in open power unit (OPU) and silent pack versions. The OPU is complete packaging which includes the radiator system and associated hoses. This design can help ease design and installation for manufacturers as all of the necessary components are already integrated. A silent pack includes the OPU and additional packaging to provide weather protection, as well as further noise reduction. With the silent pack noise is reduced another 60%.

“[We] started with one engine, [and now have] seven versions; four different emission [derivatives], based on two different displacements. With this family [we] cover the full line between 18.4 and 55 kW,” concluded Richter-Schutzeneder.

H Series in Use

With the addition of the 3-cylinder 3H50 engines to the H Series, Hatz Diesel is able to provide OEMs with more engine options to meet additional application needs. Click on the titles below to read about some of the most recent applications in which the H Series engines have been utilized.