The DEUTZ TTCD 6.1 engine is the first to be certified by the German Federal Motor Transport Authority to be EU Stage V compliant. 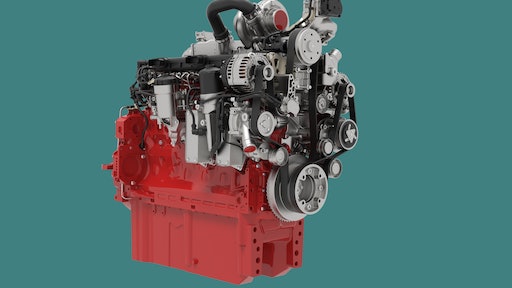 DEUTZ is the first engine manufacturer anywhere in the world to receive a certificate for the EU Stage V emission directive for mobile machinery which will apply from 2019. On September 6, the German Federal Motor Transport Authority formally certified the DEUTZ TTCD 6.1 engine for Stage V.

This certification delivers on the promise that DEUTZ, the Cologne-based engine manufacturer, made to its customers four years before the new standard was due to come into effect. In 2015, DEUTZ announced that the current engine generation would meet the expected Stage V standard and introduced the ‘Stage V ready’ seal. The entire range of DEUTZ TCD engines fitted with diesel particulate filters now bears this seal. ‘Stage V ready’ has now become ‘Stage V certified’. Initial certification of the TTCD 6.1 is to be followed in November 2017 by certification of the TCD 3.6/4.1/6.1/7.8 and TTCD 7.8 models – just in time for Agritechnica (the world’s foremost agricultural machinery trade fair to be held in Hannover from November 12-18), where DEUTZ will be showcasing its certified engine portfolio for the first time under the new ‘Stage V certified’ seal. By obtaining the first EU Stage V certificate, DEUTZ is also delivering on its environmental promise and positioning itself as an engine manufacturer with an eco-friendly focus.

The EU Stage V emissions standard represents a major challenge to engine manufacturers, mainly because the recently introduced limit on the number of particles can only be met by fitting a diesel particulate filter (DPF). DEUTZ has been employing DPF technology for more than 10 years and it is a standard integral feature of its TCD product range. Changing from the current EU Stage IV to Stage V requires no additional installation space, thus avoiding expensive modifications to customers’ equipment.

Operating a DPF demands in-depth know-how. The load profiles are completely different depending on the equipment in which the engine is installed. An intelligent ‘Heat Management’ system is needed in order to be able to burn off the particles collected in the DPF. DEUTZ has consequently developed what it calls a ‘Heat Mode’ to specifically raise the exhaust-gas temperature and to ensure the machinery is operated safely.

As Michael Wellenzohn, member of the Board of Management of DEUTZ AG for Sales/Service & Marketing, explains, “We made a promise in 2015 and, now that we’ve been awarded the world’s first certificate, we’ve kept that promise. This will provide our customers with flexibility when installing engines in their machinery and give them planning certainty when changing to Stage V. We are particularly proud to receive the world’s first Stage V certification and it underlines our technological lead in exhaust aftertreatment.”