A specialized mechanism is created in 1913 to allow a dragline to work and travel on soft ground without becoming mired. 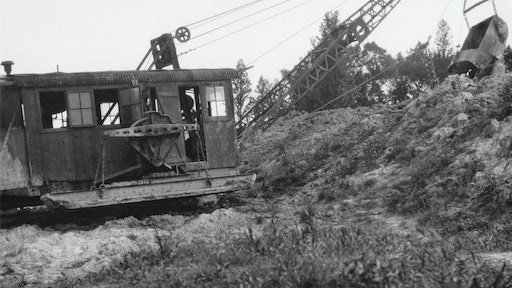 The Monighan 1-T was the first dragline to be equipped with walking shoes.

Early draglines were often rail-mounted, working from temporary track that could look like steel spaghetti draped across the ground. Others moved on rollers which were picked up and relocated as the machine needed to be moved.

But where the largest shovels could be mounted on multiple crawlers, draglines of a size suitable for large-scale excavation usually could not. While a stripping shovel worked inside the pit on stable footing, the biggest draglines usually worked on softer benches in the overburden, and the considerable weight of these machines borne on crawlers created ground pressures greater than such a surface could bear.

This problem was solved in 1913 by Oscar Martinson. Martinson, an engineer with Monighan Machine Company, conceived a mechanism that allowed a dragline to work and travel on soft ground without becoming mired.

Dubbed the Martinson Tractor, it mounted to the frame of the upper works and utilized an eccentric trunnion to impart a walking motion to a shoe on either side of the dragline. The trunnion was operated by a rotating shaft, and as the shaft turned the shoes, and the front of the dragline itself, were alternately lifted up and forward and then lowered gently to the ground, thus propelling the machine forward. When digging, the shoes were left in the raised position, and the machine’s base, called the tub after its tub-like appearance, bore the dragline’s weight and spread it more widely than could a set of crawlers.

The principles of Martinson’s design became the industry standard, and draglines so equipped even came to be known as walking draglines. Martinson later improved the design by mounting the shoes to the trunnion with cams instead suspending them from it by chains, and competitor Page Engineering developed a more elaborate mechanism using spuds instead of the trunnion and cam system. The Big Muskie, the largest dragline ever built, and some Russian draglines used massive hydraulic cylinders to power their walking systems.

The Historical Construction Equipment Association (HCEA) is a 501(c)3 non-profit organization dedicated to preserving the history of the construction, dredging and surface mining equipment industries. With over 4,000 members in 25 countries, activities include publication of a quarterly educational magazine, Equipment Echoes; operation of National Construction Equipment Museum and archives in Bowling Green, OH; and hosting an annual working exhibition of restored construction equipment. Individual memberships are $30.00 within the USA and Canada, and $40.00 US elsewhere. HCEA seeks to develop relationships in the equipment manufacturing industry, and offers a college scholarship for engineering students. Information is available at www.hcea.net, by calling 419-352-5616 or e-mailing info@hcea.net.

The development and certification of autonomous driving applications for trucks is a challenge for which new approaches and methods must be introduced.
dSPACE
January 10, 2023
Latest
Actuators

Improvements to a steam shovel's dipper and boom prove to be a failure due to excessive stresses on the cylinder.
Historical Construction Equipment Association (HCEA)
December 7, 2011