John Deere has set a world record for building a full-sized combine out of cans and bags of food. 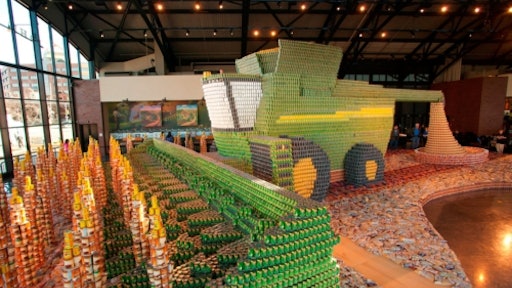 It's a new world record! John Deere's Project "Can Do" created a full-sized combine made entirely from food – 308,448 cans of food and 11,268 bags of food to be exact. According to Guinness World Records, Project "Can Do" is by far the largest sculpture ever built from canned food, more than doubling the number of cans used in the previous record set two years ago.

The combine can-food sculpture, which is 60 feet wide, 80 feet long and 16 feet tall and weighs approximately 170 tons, was created to recognize the vital role that America's farmers play in feeding the world. The sculpture depicts John Deere's new S-Series Combine harvesting corn and showcases how new equipment and technologies are helping farmers meet the growing world demand for food by delivering more productivity and efficiency to their farms.

The world-record can-food sculpture was built November 12 to 17 by a team of 450 John Deere volunteers including employees, retirees, employee families and friends. The structure took more than 1800 hours to build and contains more than 15 different kinds of canned food. In addition to the cans of food, the sculpture contains 11,268 bags of popcorn, peas and beans.

The sculpture was on display at the John Deere Pavilion in Moline, IL, until December 12 when it was dismantled and all the food was donated to River Bend Foodbank. River Bend serves families in the Quad Cities and 22 counties in Eastern Iowa and Western Illinois.

"Project 'Can Do' gave our employees, retirees and their families a tremendous sense of accomplishment and pride in being part of this good-will effort," says Nicole Schneider, project co-leader/copywriter for John Deere Ag & Turf Division. "We all are thrilled with the success of this project and that all the food was donated to help those in need during this past holiday season. In fact, for every volunteer who worked on the build, one person in need will be fed for one year as a result of all the donated food."

Richard Williamson, project co-leader/art director for John Deere Ag & Turf Division, says the project is considered a zero-landfill project with all of the building materials being either recycled or reused. In addition, he credits several organizations for helping support the company's efforts to create the world's largest sculpture of canned food.

"The project wouldn't have been possible without technical help from a number of organizations," Williamson adds. "Those include Canstruction, Inc., which organizes canstruction competitions worldwide; the Chicago architectural firm RTKL, Inc., that led the design and construction of the project; and Hy-Vee Food Stores, which helped source and deliver all the cans of food."

During the construction phase of the can sculpture, John Deere fans from around the world participated in Project "Can Do" by designing "virtual cans" and submitting them via the John Deere Facebook page. Photographs and videos about the project and its construction can be found at www.Facebook.com/JohnDeere.