FTR reports October Class 8 truck orders were at a near record level, achieving an 87% month-over-month high. 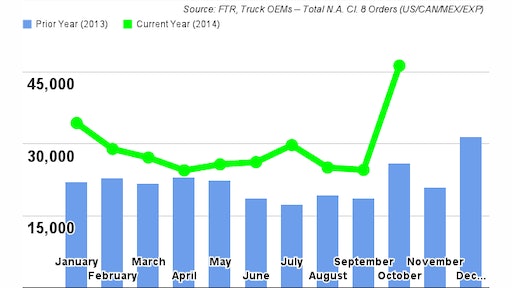 FTR has released preliminary data showing October 2014 North American Class 8 truck net orders at 45,795 units, a near record number. October was the second highest order month ever recorded resulting in 87% month-over-month and 76% year-over-year comparisons. The large order increases were not evenly distributed among OEM’s with some experiencing a higher influx of orders than others. Class 8 orders for the latest six month period now through October annualize to 354,000 units, a major increase from the previous 6-month period ending in September.

Don Ake, FTR Vice President of Commercial Vehicles, comments, “The huge amount of orders was driven by several very large fleets placing orders to be built throughout 2015. This is the result of the industry operating near full capacity and fleets having confidence that freight growth will remain strong for the entire year in 2015. They want to lock in their orders now to guarantee future deliveries. We will be evaluating the second half of the 2015 forecast in light of the confidence reflected in this large order volume.”