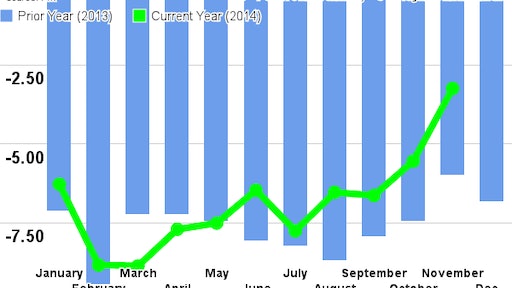 FTR’s Shippers Conditions Index (SCI) for November 2014, at a reading of -3.2, continued to reflect the easing of capacity tightness combined with a significant drop in fuel prices. While capacity conditions improved in 2014Q4, from the critical stage earlier in the year, it is still a negative factor along with rising rates that will continue to impact shippers throughout 2015. With fuel pricing continuing to drop in early 2015, FTR expects the SCI to hit positive territory to start off 2015 before moving lower and then remaining in negative territory indefinitely, barring a recession.

Jonathan Starks, FTR’s Director of Transportation Analysis, comments, “While capacity pressure modestly eased from the extremes that persisted during the first half of 2014, it still remains a tight market by historical standards. The biggest impact on the SCI recently has been the dramatic drop in fuel prices. This is a positive for shippers, as long as it continues to move lower. Once prices bottom out and move back up, the overall costs for shippers will move up correspondingly. The fuel decline is good for total spending, but the base rates being charged by carriers continue to move higher. Driver wages are moving up (approaching double-digit gains) in response to the tight capacity situation and the driver shortage.”

The SCI is a compilation of factors affecting the shippers transport environment. Any reading below zero indicates a less-than-ideal environment for shippers. Readings below 10 signal that conditions for shippers are approaching critical levels, based on available capacity and expected rates.