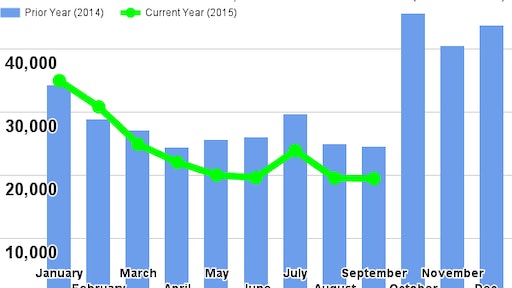 FTR has released preliminary data showing September 2015 North American Class 8 truck net orders at 19,460 units, 0.4% below August. The September order activity met expectations albeit with a higher anticipated cancellation rate for the second month in a row. Base Class 8 order activity has been consistent for the past five months. September 2015 follows the trend of previous months with a -21% year-over-year comparison. However with heavy ordering early in the period, the past 12 months continue to annualize at a solid rate, now at 345,000 units.

Don Ake, FTR Vice President of Commercial Vehicles, comments, “After the wild order activity that started last October, the market has fallen back to a remarkable level of consistency. To have five months of orders be this stable in a stronger market is likely unprecedented. Fleets loaded their orders into the backlog by March and OEMs have just been filling in the remaining slots since then. We don’t see the increased cancellation rate the past two months as being a cause for concern. The orders that were cancelled were placed seven months or more prior to this, to hold production slots. While the market is softening some with fleets now deciding they do not need these trucks, total backlogs remain strong.

Final data for September will be available from FTR later in the month as part of its North American Commercial Truck & Trailer Outlook service.