During the recent CECE Congress, industry members discussed the growing role digital technologies are playing within the construction equipment sector, as well as the slow recovery taking place in the European market. 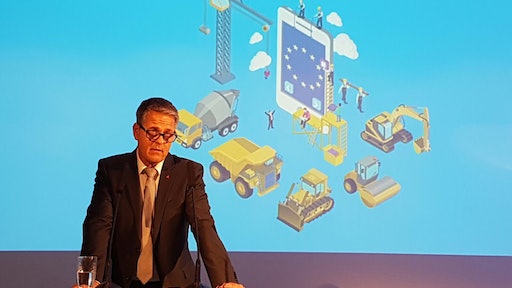 “We can only be competitive long-term, sustainably, if we make sure we are the best. The European construction equipment industry is an example of technology leadership. Increasingly, our machines are ‘digitized’ and there is no escape from that. We must, and we are, embracing it. In fact, Europe as a whole must strive to be an engineering and digital powerhouse as well. It’s the right approach for our societies and economies going forward.”

This was the main message from CECE President Bernd Holz, addressing the CECE Congress 2016 in Prague, Czech Republic, gathering close to 200 leaders from the construction equipment industry in Europe, as well as technical experts, sales managers, trade press and international trade association representatives.

The main theme of this year’s congress was ‘Industry in Transformation – Drivers of Success.’ The two-day program with dozens of speakers explored a multitude of relevant trends, from the transformational forces in the Central and Eastern European region, to the wave of digitization currently enveloping industry, to the global economic outlook and the latest technical developments in the field of electrification, as well as in the organization of the construction site of the future. The CECE Congress 2016 was hosted by the Czech national association member of CECE, SVSS, and made possible with the special support of Doosan Bobcat and Ammann which both maintain substantial production facilities in the country.

Holz, who leads the Ammann Hennef factory in Germany, as well as manages the Northern European Sales region for the road construction equipment producer, reflected on the daily challenges of manufacturing in Europe: “As manufacturers, we are determined to serve our customers, regardless of the regulatory burden or the economic constraints we are confronted with,” he says. “The sector has used the last decade to make its production leaner. We feel we are well-placed to compete with each other and the rest of the world. We are confident we can increase our marketshare worldwide. And we are transforming our business models, becoming more service- and customer-oriented than ever before.”

Despite the strong demand in the first half of the year, the industry sentiment looking forward is more subdued. The CECE business climate index was back at positive levels in September, having digested a steep dip in July following the Brexit vote, and after 8 months of gradual improvement since the autumn of 2015. Concrete equipment manufacturers are currently the most optimistic sub-group within the CECE Barometer, while road equipment manufacturers are least optimistic about growth. Demand from the mining sector continues to be very weak, which has a restraining effect also on construction equipment sales.

Holz says, “Provided that the general conditions within the sector and its customer industries do not change substantially in the coming months, CECE expects full-year growth of the European market of between 5 and 10%.”

Markets at a glance

France recorded a plus of 53%, recovering from a very bad year in 2015. The German market (+14%) is reaching record levels, and the UK (-12%) just comes from record levels. Italy and Spain posted growth of +33% and +11% respectively. Uncertainty prevails for the Russian and Turkish markets, though the first seems to have hit the bottom. Sales in Russia were 4% up after 6 months, but still at a very low absolute level. As an illustration, the Russian market is currently smaller than the Austrian, Swedish and Norwegian markets.

The Central and Eastern European region is seeing strong growth in the construction sector, primarily fuelled by infrastructure investments. Construction sector output as forecast by Euroconstruct for the Czech Republic, Hungary, Poland and Slovakia is set to grow by +4.1% in 2016, +5.7% in 2017 and +6.7% in 2018. Poland is clearly taking the lead: civil engineering growth from 2015-2018 is anticipated to be +13% per year. 2014 and 2015 were already good years for the construction industry in the CEE region (+5% growth each year). Against this backdrop, it is a bit surprising that equipment sales in 2016 are rather weak (-18%). Reasons might be a base effect -- the first half of 2015 was very strong -- and maybe some impact of the Russia/Ukraine turmoil.

The building construction equipment sector continued its growth in Europe in with a plus of around 30% in the first half of 2016. This is not surprising, given that European residential (+3.1%) and non-residential (+2.5%) construction industries are seeing the strongest growth since 2007. While levels of building activity are still well below pre-crisis levels, it is notable that recovery has begun in regions where there hasn’t been any growth in recent years.

Earthmoving equipment sales (excluding telescopic handlers) reached a level of 84,000 units in the first half of 2016, the highest since 2008, and corresponding to a year-to-date growth of 14% after 6 months. There are various reasons for the strong performance in the earthmoving equipment sector: the demand push following bauma, much stronger investment activity by the rental sector, a good performance in the civil engineering sector, but most significantly, a concurrence of positive market developments across European countries and regions.

Road equipment is the sub-sector within the construction equipment industry at the most advanced stage of post-crisis recovery, reaching an estimated plus of around 10% in the first half of 2016. Germany is the largest road equipment market in Europe with more than 30% of all machines sold there. With the recovery of the French market, the country now ranks second just ahead of the UK. Much will depend on whether rental companies will continue to invest in their light equipment fleets in the coming months.